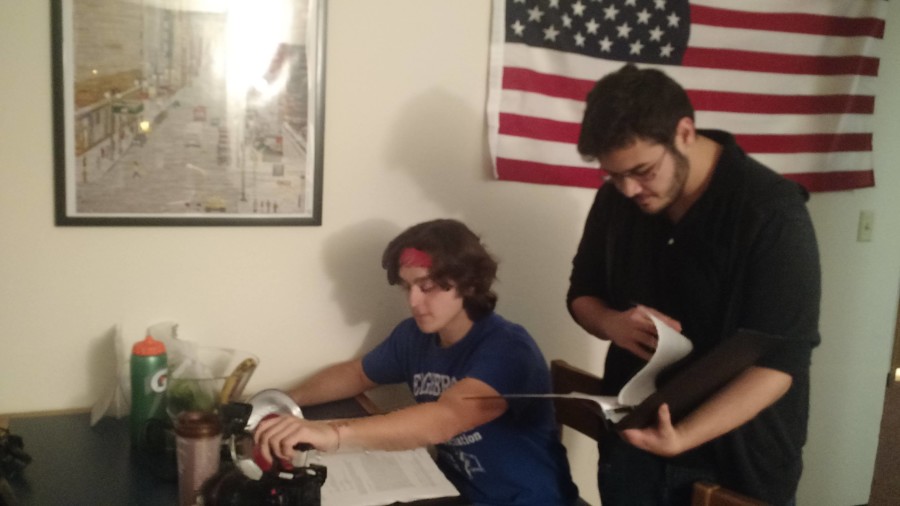 “We really want this to be one of the biggest projects to come out of Marquette,” Bicknell said. “We’re just going full-force with it too.”

It’s a grandiose statement, but one that Bicknell and Mohsenian have earned the permission to say. Unlike many people who whisper their goals quietly to themselves with no drive to make them a reality, these filmmakers write their’s in a full-length script and proclaim it to the world with the word, action!

Together, Bicknell and Mohsenian are the co-creators of “Salvage,” splitting the responsibilities that accompany it almost down the middle.

The miniseries itself is a surreal mystery drama, which takes inspiration from the TV series “Twin Peaks” and “True Detective.”

The setting is a college campus, filmed at Marquette, where a “dark change” occurs among students, causing the preexisting bad habits and vices of college to be amplified. In particular, it follows two ordinary students who try to make sense of a series of mysterious crimes.

“They’re trying to do what they think is the right thing and salvage what they can along the way,” Mohsenian said.

The filmmakers hope that by using a realistic setting for their story, it will prompt their audience to think about their own lives in a unique way.

“We want people to realize how absurd a lot of college tendencies are, and that we all don’t live in our own worlds,” Bicknell said. “The world around us is very much a part of our lives whether we like it or not.”

The cast is made up of two main characters and six supporting roles, in addition to a slew of small parts. All actors are either current or former Marquette students.

The specifics of the plot are a heavily-guarded secret, considering the intricacies of the story implied by Bicknell and Mohsenian. At one point during their interview, Mohsenian gave away more information than he was supposed to and was stopped by Bicknell. It was a moment that drew attention to their professionalism as budding filmmakers. Though their paranoia of leaking plot secrets seems unnecessary for an independent student film, it speaks to their level of seriousness that they take their project.

For the filmmakers, providing the audience with a compelling and meaningful narrative is at the heart of their work.

“For people to be able to watch something and relate to it … not only are they able to be entertained and lose themselves, but reflect on their own lives through that,” Bicknell said, explaining why story is so important.

It is this devotion to storytelling that is behind every decision they make as filmmakers.

“The crew is small because we wanted to be really intimate with actors and direct them well,” Mohsenian said. “Mainly it’s just me and George.”

“We’re going to shoot in a kind of guerrilla style … we just want to get the camera and sound and get in there, because we want to work with actors.” Bicknell said.  “We want to get some great performances and really push story and performance over the technical side.”

Story was important from the project’s initial conception last spring, where it went through many changes before becoming what it is now.

“My original idea was a TV detective series, we had a bunch of friends who were actors who wanted to be involved and we wanted to make a story that utilizes everything at our disposal,” Mohsenian said. “That was our original idea. But then we were like, ‘Let’s use the college campus, let’s use students, let’s make it more surreal.’”

Utilizing what they have around them is another vital aspect of Bicknell and Mohsenian’s filmmaking style.

Without making their own individual drive seem less remarkable, the project almost could not have happened outside the Marquette community.

Not only does Mohsenian and Bicknell’s access to Marquette provide them with talented actors, a diverse range of shooting locations and free equipment, but also the confidence gained form working on class films.

“Last semester we were in an advanced production class, George and I were lucky enough to have our scripts chosen and to make our own short films,” Mohsenian said. “Having our names as director or writer, it really does inspire confidence in our abilities, otherwise I don’t think we’d have the ambition to do this kind of project.”

The encouragement did not end in the classroom. Bicknell and Mohsenian praised Amanda Keeler and Joe Brown, both professors in the College of Communication, for their ongoing support.

“(They both) helped us with moving the script forward and thinking about how we can … keep everything under,” Bicknell said. “And they’ve done a great job of that.”

Mohsenian, who is doing an independent study with Keeler for this project, agrees that the professors’ willingness to meet with them has been positively influential.

Bicknell and Mohsenian started filming “Salvage” two weeks ago and are still in the process of finishing the script. However, once “Salvage” is complete, they plan to release it episodically on YouTube or Vimeo, in addition to submitting the pilot episode to the College of Communication’s student film festival later in the year.

Bicknell and Mohsenian’s joint passion for their project is apparent, and it is clear that in their minds, as long as they create a powerful and meaningful story, they will have succeeded as filmmakers.