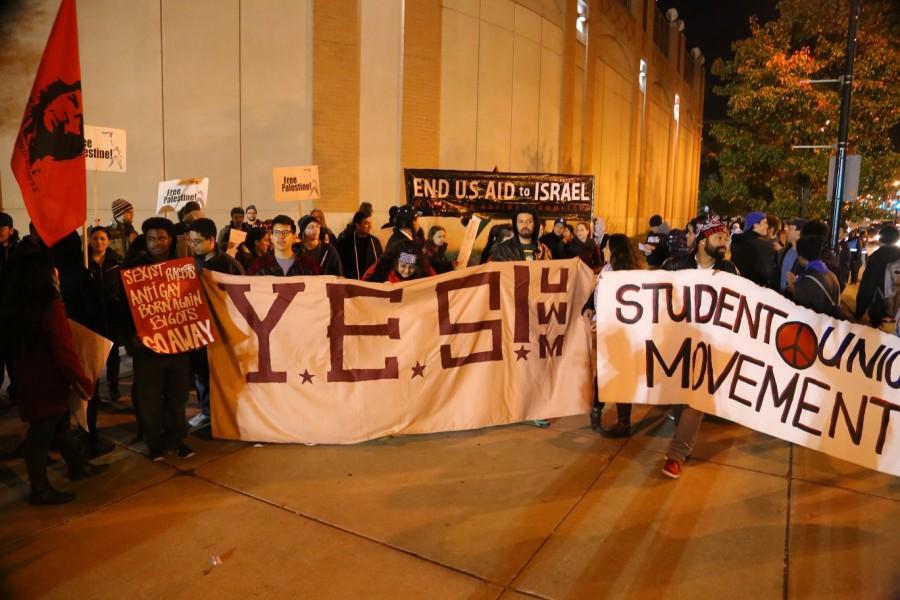 Students were among Milwaukee-area protesters that multiplied by the hundreds outside the Milwaukee Theater, where the fourth Republican presidential debate took place Nov. 10, to support each other on issues including education reform, immigration rights, low-wage workers and U.S. aid to Israel.

When one of the handful of the conservative protesters tried to disrupt the others, they united further and made a circle.

Miguel Sanchez with the Marquette Youth Empowered in the Struggle chapter

Sanchez, a junior in the College of Arts & Sciences, marched from Marquette’s campus with the university’s YES chapter to join the Milwaukee Anti-War Committee in protest.

“We hope to cause a ruckus,” Sanchez said as protesters marched in the middle of the street with police following in cars and motorcycles. “If there aren’t any people out on the streets letting the candidates know that there are issues … people are going to continue to live on as if there wasn’t anything wrong.”

Sanchez stressed putting an end to hate speech used by Republican candidates, referring to their use of the term “illegal immigrants.”

Gadeer Ayesh with Marquette Students for Justice in Palestine

Ayesh, a senior in the College of Health Sciences, led chants by shouting “free Palestine!” into her microphone throughout the night. She argued that Israel takes advantage of U.S. aid to buy weapons and force thousands of Palestinians out of their homeland.

“Republicans are the ones lobbying for this money,” Ayesh said. “They are aiding and abetting Israel’s actions.”

Some protesters chanted “live Palestine!” in Spanish to show solidarity for the Free Palestine movement.

Perea-Hernandez, a freshman in the College of Arts & Sciences, marched down Kilbourn Ave. with a large group of protesters in time for the first 10 minutes of the debate.

As a member of an immigrant family, Perea-Hernandez said he knows the most about the immigration movement. He held a sign listing causes he was supporting: labor rights, immigration reform and the Black Lives Matter movement.

“We are made promise after promise but they are never kept,” Perea-Hernandez said. “There’s a similar situation with Black Lives Matter. We are not being treated as citizens.”

His three causes melted into one underlying demand: equality for all.

“Even though I am one voice, and I know I am losing it now, I am still a voice for millions and billions of human beings,” Perea-Hernandez said. “We are still making a noise and I will be here until the last person leaves.”

Marina Johnson with Students for a Democratic Society at UW-Milwaukee

Johnson held a sign reading “education not deportation” as she walked united with other protesters next to the BMO Harris Bradley Center.

“I went to Milwaukee public schools and I was around a lot of undocumented citizens,” Johnson said. “Over the past few years we’ve seen a huge decrease in funding for non-legal citizens to go to college but, education is their way to gain citizenship.”

Johnson is a sophomore and said she wasn’t able to attend college until she received life insurance money from her father’s death.

“We don’t think people should have to die to send their kids to college,” she said.

Flom was one of the first people at the protest area near 6th St. and Kilbourn Ave., arriving two hours before the debate started.

“We’re protesting the Republican agenda today which … is an agenda of hate, anti-woman and anti-immigrant and anti-worker propaganda,” he said.

The committee marched around the Bradley Center to the Milwaukee Theater with five other organizations, including YES and Students for a Democratic Society.

“We’re out here to say that Milwaukee doesn’t stand for those things,” Flom said. “Milwaukee is a progressive city.”

His group’s demands include no more wars, an end of U.S. aid to Israel, Donald Trump to drop out of the race and ending attacks on minority groups through immigration and education reform.

As the candidates took their places on the theater’s stage, the protesters lay down on Kilbourn Ave. to show their resistance to the Republican Party.

Marquette College Republicans were also involved with the debate by way of volunteering at it and meeting some of the candidates.