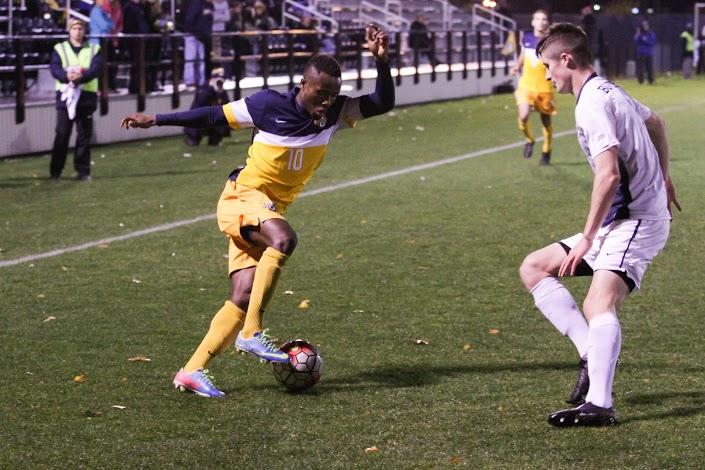 The Marquette men’s soccer season will end with little fanfare Thursday afternoon at DePaul. No matter the outcome of the match, the Golden Eagles are locked into finishing ninth place in the conference, only ahead of winless Seton Hall.

For the first time since 2008, Marquette will not make a postseason tournament. So what went wrong?

Injuries were a constant issue for the Golden Eagles, forcing plenty of youth into serious roles. Redshirt senior forward David Selvaggi, tied for second on the team in goals, missed time throughout the season with multiple leg injuries. Redshirt freshman Martin Alba, who was a consistent starter in the team’s midfield, missed the final eight games of the season.

Redshirt freshman Danny Jarosz, an expected defensive starter, suffered an injury in the first game of the season against Oregon State and never returned to the lineup. Junior Nick Parianos suffered a knee injury last season and missed all of this year.

The injuries seriously impacted the team’s depth, forcing many young players into the lineup. The Jarosz injury pushed freshman Ruben Sanchez from the midfield to the backline. After the Alba injury, freshman Ben Tweedie made it into the starting lineup a bit earlier than the team expected.

“You know those domino pictures?” head coach Louis Bennett asked. “You press one down, and they all seem to fall.”

Five of the six true freshmen on the roster got serious playing time this season: goalkeeper Wicho Barraza, forward Toby Howell, midfielder Jesper Larsson, Sanchez and Tweedie. That’s quite unusual from a team that likes players to get a redshirt season to prepare them for the future.

“I think this year nothing was ideal,” Bennett said. “It was one of those things where we knew it might be bumpy road, and we strapped up and put our seat-belts on. But it was probably a little bit bumpier road than we first thought.”

Although many of the freshmen made decent contributions, it was quite a challenge to play a youthful lineup against the BIG EAST Conference, which housed some of the best programs in the country this season.

“There are other teams in our conference that had record breaking years, but not with freshmen,” Bennett said. “(They had) 11 seniors, eight seniors. One of the long term goals I would like for Marquette program is to be able to stay old. That’s a difficult thing to do in college sports.”

Despite the struggles this season, there is some reason for optimism. All the youth who received playing time this season now have a year under their belts, which could help the team going forward.

“There are some people that have come out of this, and they are going to be stronger and better,” Bennett said. “It might not be completely the right kind of experience that we would have liked, but it’s experience that I believe the real smart ones will use.”

The season overall was a disappointment for the Golden Eagles. Bennett hopes that this is just a blip on the radar for a team that has been very successful over the last five years.

“It may appear to be four steps back, but I believe it’s one or two steps back,” Bennett said. “The results weren’t always indicative of how we play. There were probably three games where we didn’t really show the brand of Marquette soccer, including half the game (against Butler). In most of the other games you saw a brand of soccer we are all proud of.”