Hockey remains unbeaten at home with sweep of UWM 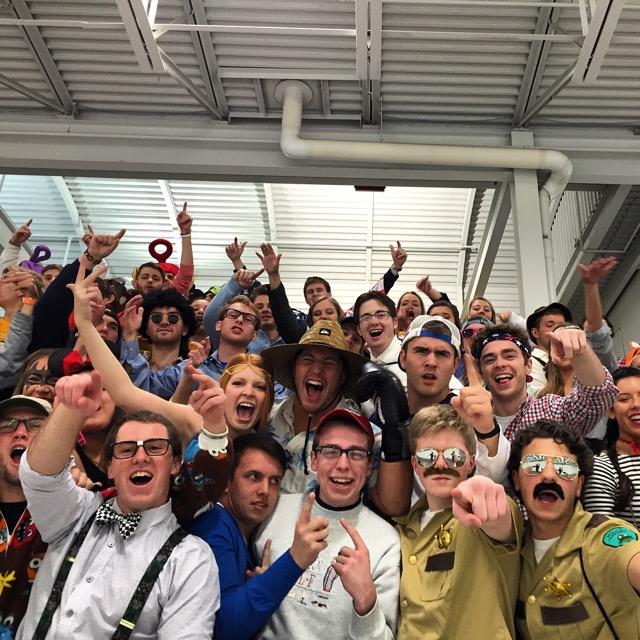 The student section was packed to see Marquette capture a 7-4 victory over UWM for the annual Halloween game Friday at the Ponds of Brookfield. Photo courtesy of Peter Fiorentino.

The Marquette club hockey team swept both games of the weekend series against crosstown rival UW-Milwaukee to remain a perfect 6-0 at home and move to 8-3-1 overall.

The Golden Eagles then scored three unanswered points to take a 4-1 lead into the first intermission. UWM tallied two goals in the second period, but Marquette still led 4-3.

The Panthers tied the game up early in the third, but Marquette quickly responded. Junior Johnny Stillman and sophomore Brian Kennedy each tallied goals, and senior Mitch Ellena sealed the victory with an empty net goal from his own defensive zone to make it a 7-4 final.

“It was really important that we had a strong start and just kept up that intensity for the entire game,” said junior forward and team captain Adam Benkovich.

On Saturday, Marquette didn’t have to worry about a UWM comeback. The Golden Eagles raced to a 7-0 lead after the second period, and never backed down. Benkovich earned a hat trick mid-way through the third, and finished with four goals on the day, as Marquette dominated in a 13-1 rout.

“The team was really clicking this weekend that’s for sure,” Jurgensen said of the weekend’s offensive outburst. “Especially on Saturday all four lines found some noticeable chemistry out there.”

The Golden Eagles haven’t lost a regular season home game since Nov. 7 of last year, when they lost to Robert Morris-White. Their home streak now stands at 12 straight wins.

Marquette has a chance to push its home win streak to 14 next weekend when it hosts the Creighton Bluejays at the Ponds of Brookfield.