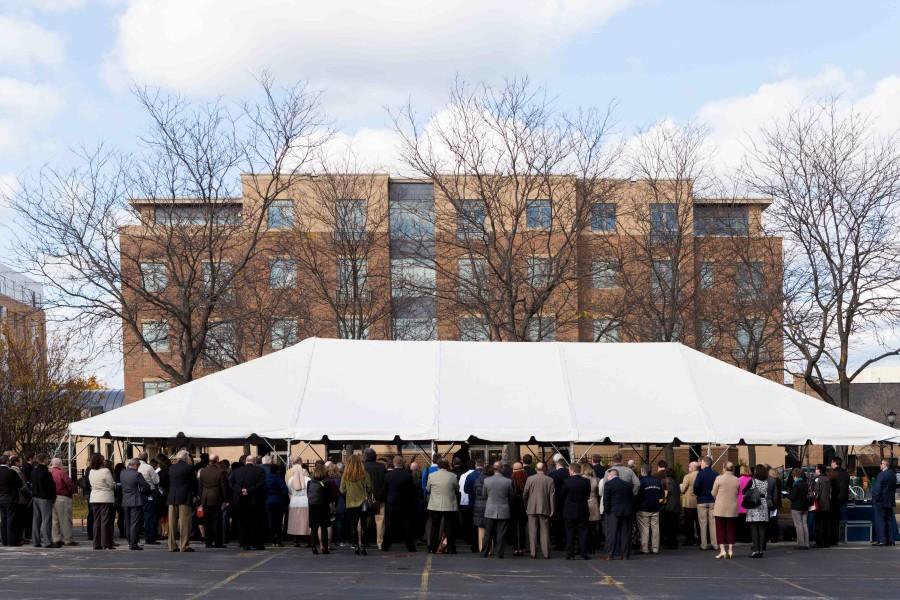 More than 100 people gathered in front of the new Dr. E. J. O’Brien Jesuit Residence in the 1400 block of W. Wells St. for its dedication ceremony on Oct. 30.

Michael VanDerhoef, vice president for university advancement, opened the ceremony by recalling when Marquette broke ground on the building almost one year ago. Construction on the residence is slated to officially finish around Thanksgiving.

The residence is named after Patricia Schneider’s father, Marquette alumnus Dr. E. J. O’Brien. Schneider donated $10 million in January 2014 to construct the building, which will have a chapel named after her late husband, Donald Schneider. The residence was also built with a $5 million gift from Ray and Kay Eckstein’s charitable trust.

“This new residence reflects our contemplative, communal way of living,” said the Rev. Jeffrey LaBelle, assistant professor and rector of the Jesuit community. “With it we can continue to make a profound academic and spiritual contribution to the Marquette community.”

Lora Strigens, chief university architect and planner, said it is part of the campus master plan to redevelop the whole area between Schroeder Hall and the AMU, known as “shamu.” She said plans includes removing the parking lot in front of Schroeder Hall and replacing it with a grassy, open area.

“We want to enhance it and make it a more connected part of our campus and beautify it,” Strigens said about the area. “There is also future development plans for the site of the old Jesuit Residence.”

Originally a hotel built in 1916, the previous Jesuit residence is scheduled to be demolished in the spring after graduation. Jesuits started moving into the new residence during fall break two weeks ago.

The five floor residence, flanked by the Alumni Memorial Union and Schroeder Hall, takes up 40,000-square-feet of land. It was constructed to be environmentally-friendly and it will house 25 of the 33 Jesuits in the Marquette Jesuit community.

The building contains 25 resident rooms, five guest rooms, three chapels, a library, lounging areas with a gas fireplace, an 800-bottle wine cellar and a snack room with a beer tap.

“We finally have a home for our Jesuits worthy of the great work they do on campus,” University President Michael Lovell said. “We will look back on this day as an important mark in the history of our university.”

The old Jesuit Residence experienced many issues due to its aging structure, which is the second oldest building on campus. They include flooding from a burst pipe in 2013.

After the speakers gave their remarks, the Rev. Thomas Lawler provided a blessing while LaBelle blessed the residence entrance with holy water. Lawler said that, with the blessing, the residence would be a living symbol and commitment to Jesuit tradition.

“It’s been a long time coming,” the Rev. Joe Mueller said after the ceremony. “This is better than the old Jesuit Residence. It will be much easier for Jesuits to be housed now.”

Floors one and two of the building include the main chapel, dining area, common room and additional meeting areas and parlors. The Jesuits live in the top three floors of the building. There is also a fifth floor lounging patio that overlooks campus.

“This (residence) came together as easy as any project we’ve ever had at Marquette,” the Rev. Robert Wild said while on a tour of the residence. “And starting next summer our view from the patio will be converted.”

Lovell said the university is still open to possibilities of what could be developed in the old residence’s space on 1404 W. Wisconsin Ave.

“We want to make it interactive,” Lovell said about the campus master plan. “Right now in (the Marquette Student Government office), students can put dots on a map of what they like and don’t like. We are open to suggestions.”