Pro goalkeeper volunteers his time to both teams among other commitments 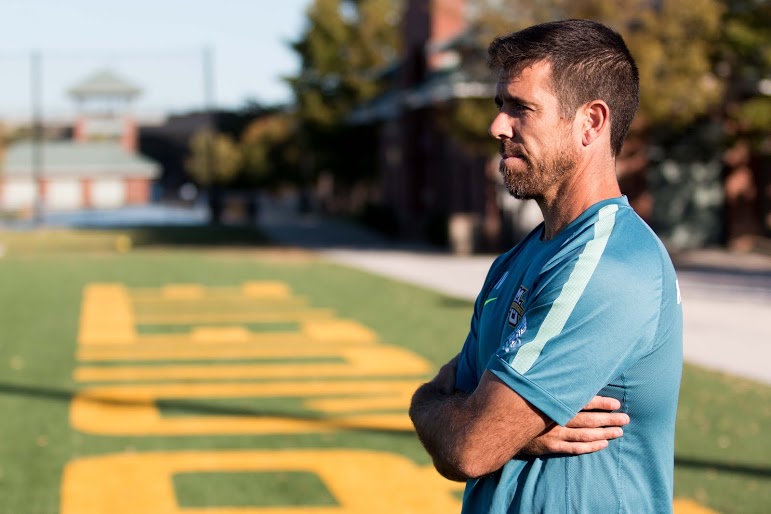 There was a time in Nick Vorberg’s life when he thought he might spend the rest of it in San Diego. He was on his third professional indoor soccer team in five years, but thought that might be where he would stick.

A year later, in 2002, he was traded to the Milwaukee Wave, where he has been settled ever since.

Settled is a loose term in Vorberg’s case. He’s a father of three, a part-time coach for both Marquette soccer teams, the academy director for SC Waukesha, a premier club academy just outside of Milwaukee, and, at age 40, is a goalkeeper and coach for the Major Arena Soccer League’s Milwaukee Wave.

Bennett first courted Vorberg in Summer 2012, in need of a volunteer assistant to work specifically with the goalkeepers. Vorberg began working with the team’s keepers, particularly new starter and then-redshirt sophomore Charlie Lyon. Lyon went on to post a 0.78 goals against average en route to a 16-4-1 record that season. The following summer, Vorberg joined the women’s coaching staff in a similar role.

“His first year was kind of an adjustment period because you could tell he was just kind of watching and didn’t want to step over any boundaries,” said women’s senior keeper Amanda Engel, who has been the starter since Vorberg’s arrival in 2013. “He has definitely stepped past that boundary by now. I know that if I ever have a question about something I can always go to him and he will give me a 100 percent honest answer no matter how much I don’t want to hear it.”

“Nick delivers his brutal honesty on a very soft pillow,” Bennett agreed. “It’s going to hit you one way or another.”

Engel said Vorberg tends to focus on the individual rather than multiple players at once during practice. When it’s her turn in net, his eyes are on Engel while freshman keeper Sloane Carlson takes mental notes, and vice-versa.

“I’m just maintaining and doing the technical work,” Vorberg said. “I’m talking to the coaches about what I saw happen in games and how they can implement that into practices.”

The coaches and players welcome Vorberg’s advice with open arms because of his indoor soccer background. Playing on a smaller field with fewer players, the goalie is more involved in the offense but still needs reactionary skills in goal.

Bennett said part of the reason the team recruited freshman keeper Wicho Barraza was because of his footwork and aggressiveness on the field, which have only improved since arriving to work with Vorberg.

With the women’s side losing Engel to graduation after this year, both the men’s and women’s teams will likely have sophomore starting keepers next season. Still, Vorberg is confident that the young netminders have gotten unrivaled experience thus far under his wing.

“What’s nice is there’s a blueprint with Amanda, as there was with Charlie Lyon,” he said. “Sloane is getting a great taste right now with Amanda. She’s got a lot to work on and there are things you take a closer look at…Every goalie is different, just like every player is different. You just have to focus on what their strengths and weaknesses are and keep building on them.”

Vorberg takes these lessons into account when working with SC Waukesha.

“What I’m interested in is the transition from club to college and figuring out what kind of college player makes a pro,” he said. “From the girls side, I have my foot in the water and can ask myself, ‘Which girls actually have an opportunity to make an impact at the DI level?’ That’s fun for me.”

Now at the tail end of his playing career, Vorberg is learning to make adjustments to the personal and professional aspects of his life. The former U.S. futsal national team goalie and Pacific University Hall of Famer wants to keep his family in Milwaukee. It’s just a matter of which hat he wants to put on that day.

“I feel that if I’m in an environment where I feel like I’m learning and I’m a part of it, and that I can contribute and it’s giving back both ways, that’s where I want to be,” he said. “It’s been that way here.”