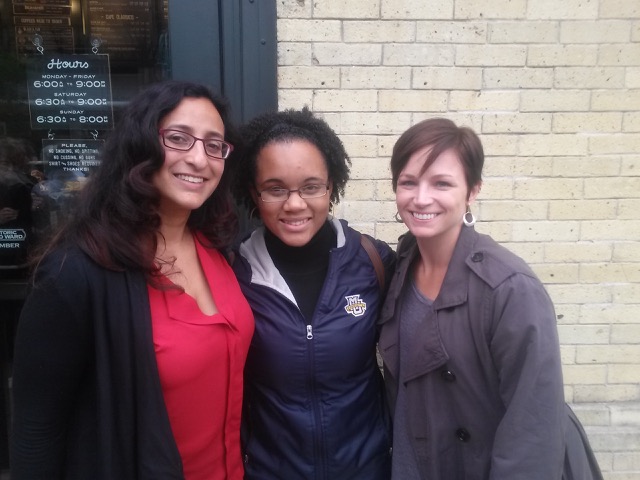 Sameena Mulla (left), Amber Powell (center) and Heather Hlavka (right) are working together on the book and hope to have it drafted within the year. Photo courtesy of Sameena Mulla.

Heather Hlavka and Sameena Mulla, assistant social and cultural sciences professors, are compiling their research on sexual violence to write a book.

After spending a summer and full semester observing more than 650 court cases, 33 of which were full trials, they have around 3,000 pages of handwritten notes, not including trial transcripts. Mulla said the book will be drafted in a year if all goes well.

“We wanted to take our work and see how a victim might experience the process of a trial,” Hlavka said. “We were taking it up to the structural level.”

The professors tracked down what happened from the beginning of the reporting process, when the sexual assault was first reported, to what happened after: if the case was taken to court and how it was handled.

“We are both qualitative researchers, so we dig really deep into the details,” Mulla said.

Amber Powell, a Marquette alumna and Ph.D. student at the University of Minnesota, was one of the research assistants who helped Hlavka and Mulla.

“They’re using very rich, ethnographic data to address victim testimony, the construction of evidence, the emergence of radicalized and gendered voices, family dynamics, expert testimony and so on,” Powell said. “They are really the only ones studying sexual assault adjudication to this extent.”

Mulla said they asked what was and was not normal about the trials they observed. They continued to ask what was normal about rape, child sexuality and race during court cases.

“It was a rich place for us to figure out what all of the stories were and how they were landing,” Mulla said. “We also sat through cases that didn’t end up at trial at all. We wanted to figure out the question: What is the big picture story?”

They will try to answer that question in their book.

“We present drafts at conference presentations,” Mulla said. “We will present at the National Women’s Studies Association in November and have done two presentations at the Law and Society Associations this past May.”

From there, they’ll try to get the book published by an academic press. Common university presses include Duke, University of California Press, Harvard, Oxford and Cornell University Press.

“It takes time,” Hlavka said. “We are going to try to submit a grant for a writing fellowship to get some time this summer to support the project. Applying for things also takes time.”

Due to the vastness of the compiled research, their findings will also be published in scholastic articles.