Saturday's win marks first against a DII team this season 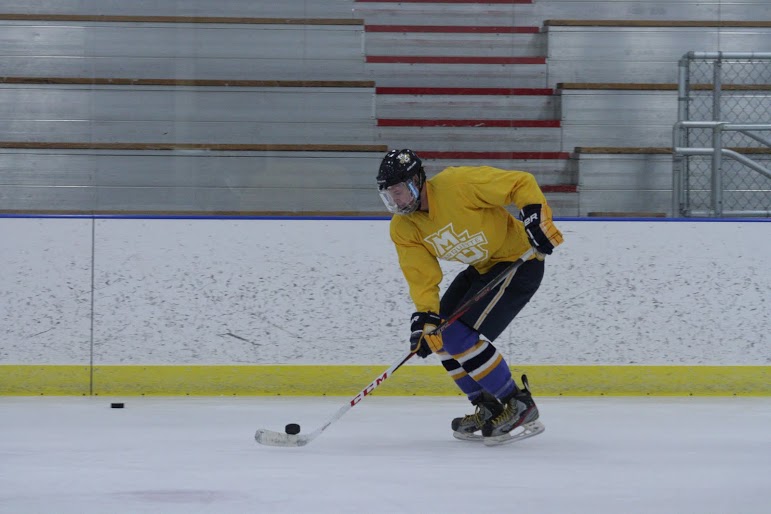 Marquette hockey had its four-game winning streak snapped this past weekend, but still got a big win against Division II University of Minnesota.

On Friday, sophomore forward Brian Kennedy opened up scoring with a goal in the second period, but the Golden Gophers found a way past sophomore goalie Robby Arner before the end of the period to knot the game at 1-1. With under ten minutes left in the third, Minnesota scored, but allowed an equalizing goal mere seconds later from Marquette junior forward Johnny Stillman. In heartbreaking fashion, Marquette gave up a goal with just over one minute left in the regulation, losing the game 3-2.

“The team really came out flying on Friday night and their ability to battle back and tie the game up late in third was great to see,” said head coach Will Jurgensen.

Saturday’s matchup yielded a much more positive result for the visiting Golden Eagles, as they once against struck first when junior forward Chris Morrow scored with six minutes left in the first period. Minnesota tied the game up early in the second period, but senior forward Mitch Ellena tied the game shortly after. Stillman scored for a second consecutive game in the third period, with what would eventually prove to be the winning goal, as the game ended 3-2.

“I’ve played with Corey Quinn for the past few years now and Will Podewils for the past few weeks so we are starting to click,” Stillman said about playing on his dynamic line. “Playing with those two guys makes it pretty easy to get some good offensive chances and I was able to capitalize on a couple of them.”

Despite losing Friday’s game, both contests were closely contested throughout the entire game, a good sign for the team’s future.

“They were a very good team for sure,” Jurgensen said. I thought we came out in both games ready to go. I mean, we had two good first periods and were 1-0 on both nights after the first so our start was a good improvement”

The team improved to 6-3-1 on the season and the win marked their first against an upper-division team, having previously lost two matchups to DePaul earlier this season.

“Being able to beat the DII teams gives the team confidence to know that we can compete with the teams in a higher division than us and that we should be able to beat any team we play in our division,” Stillman said.

Despite the win, penalties continue to be a point of concern for the Golden Eagles. At one point during Saturday’s game, the team faced a dangerous 5-on-3 penalty kill situation, and spent a majority of the period shorthanded. Though they successfully defended it, Jurgensen says the team must play more in check.

“That stuff takes time to develop but it’s clear we still have work to do,” said Jurgensen. “It’s very difficult to train or teach discipline, you can’t run a drill to prevent bad penalties, the guys just need to continue to be reminded and we have to learn from our mistakes.”

The team has a rare bye weekend this week for Marquette’s fall break, but faces cross-town rival UW-Milwaukee in a home-and-home Halloween weekend.