Rosary for Peace event held for James Foley on his birthdate 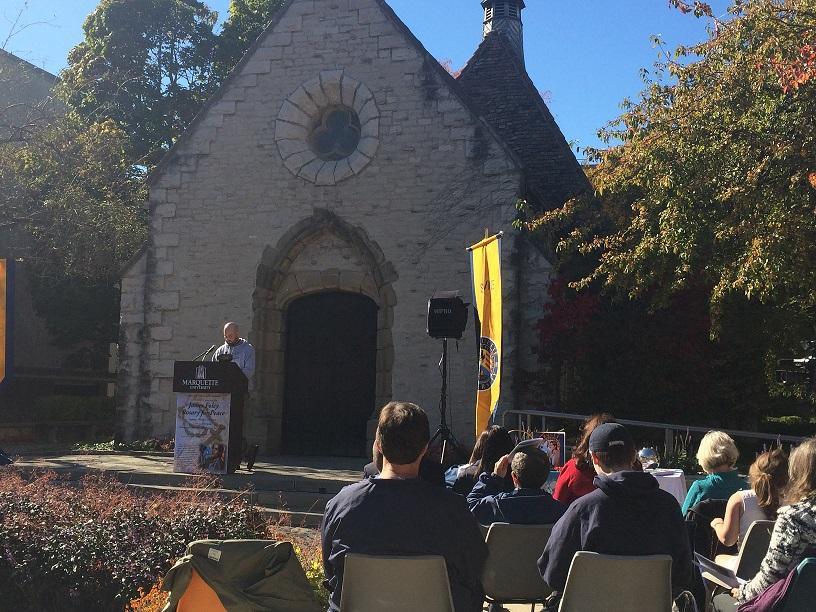 The rosary for peace was held at the St. Joan of Arc chapel. Photo by Julie Grace /julie.grace@marquette.edu

Nearly 100 people gathered outside St. Joan of Arc Chapel Sunday for the first annual Rosary for Peace in honor of the late James Foley, a 1996 graduate of the College of Arts & Sciences.

The rosary concludes a series of events on campus and across the country to remember Foley, who would have been 42 on Oct. 18.

Foley was a journalist for the GlobalPost and was covering Syria’s civil war when he was captured in 2012. He was killed by Islamic militants Aug. 19, 2014. His death, said to be in retaliation to American airstrikes against the Islamic State, was shown in a video made by the militants.

The event’s organizer Linda Rondinelli said she first considered the idea in March when she read Foley’s last letter home to his family.

“I am not a political person,” Rondinelli said. “But I wanted to find a way to continue Jim’s desire for peace. I was so moved by his story, and as a mother, this could have been my own child.”

Rondinelli said she searched and prayed for a way to continue Foley’s legacy.

“The answers are right here,” Rondinelli said. “We have to band together in prayer just like (Foley) did.”

Each attendee received a knotted rosary made of rope instead of beads, the same kind Foley used while in captivity. A recording of the Our Father prayer, sung by an Armenian priest from Syria, played outside the chapel and a welcome video by Foley’s mother played as people arrived.

The five sections of the rosary, accompanied by reflections, were led by Rondinelli; Tom Durkin, an English professor and friend of Foley; Stephanie Russell, vice president of Mission and Ministry; University President Michael Lovell and Andrew Serfas, a senior in the College of Engineering.

Each speaker offered their perspective on Foley, commenting on his prayer, life, courage, work as a Marquette alum and the example he set for students. Durkin, who wore a sweatshirt with Foley’s name and picture on it, offered a personal account on his relationship with Foley.

“What’s often overlooked is how amazingly normal James was,” Durkin said. “I never thought of him as a superhero. The greatest takeaway should be that we can all make a change in the world.”

Lovell reflected on Foley as an alumnus of Marquette.

“James stood for everything that is great about Marquette and we’re proud to call him one of our own,” Lovell said.

Serfas said Foley is “an example of someone who allowed himself to be empowered by his convictions.”

“We’re men and women for others, like (Foley,) before our majors or future professions,” Serfas said.

David Yapp, a freshman in the College of Arts & Sciences, said he attended the event because of his respect and connection to Foley.

“I decided to attend Marquette the day I heard James died,” Yapp said. “He is the bravest Marquette alum, and I could never do what he did.”

Muslim members of the Marquette community also said prayers for peace in the Muslim prayer room located in the Alumni Memorial Union.

Marquette was one of 16 institutions who prayed a Rosary for Peace in honor of Foley. Rondinelli said she hopes to grow that number to 40 by next year, including international institutions.