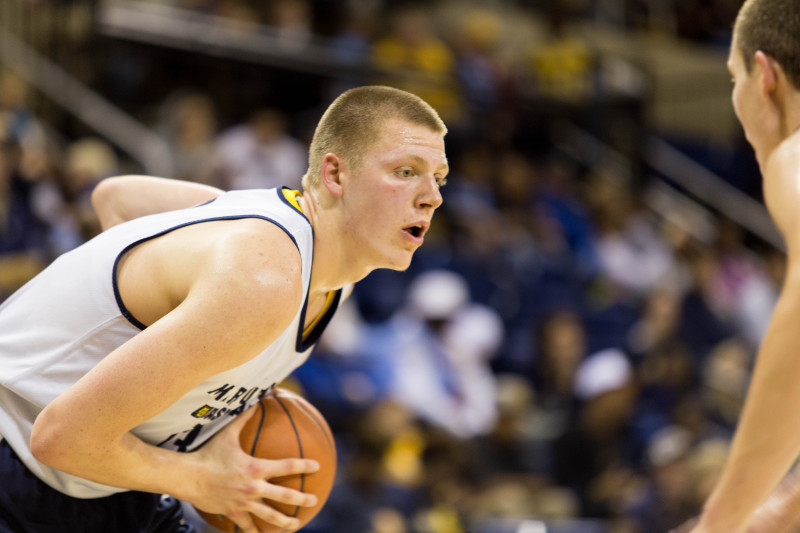 All eyes were on freshman Henry Ellenson, suiting up for Marquette for the first time in front of his home crowd. He did not disappoint, and showed why he’s often touted as the next Dirk Nowitzki. He can dunk, shoot the mid-range fade away and even make 3-pointers. He runs the floor like a point guard in transition, which could be a matchup nightmare for teams playing the Golden Eagles.

He also took the dunk contest championship from his brother Wally, who won the event last year, to cap off the evening. It’s a testament to the strength of the BIG EAST that he is only on the preseason second team.

Junior JaJuan Johnson was ranked the 27th-best player in the 2017 recruiting class by ESPN, praised for his 3-point capabilities. He’s struggled with his shot his first two years at Marquette, shooting 39 percent from the field and just 24 percent from beyond the arc. He’s shown his talent in glimpses, when he scored 20 points against Villanova for example, but hasn’t been able to string strong games together.

His mechanics looked improved on Friday night, smoothly making shots from three. That’s a good sign for Johnson, who will need to play well early to get serious minutes in this lineup.

Coming into the season, there was one huge question at the point guard position: Who will start? Madness helped relieve some of the stress, as it looks like the team will do alright no matter who is at the 1.

Freshman Traci Carter seems to be the favorite early on, and he played a more sound game than his classmate Haanif Cheatham. Junior Duane Wilson, who played point when Matt Carlino wasn’t in last year, played the scrimmage at shooting guard.

Junior Andrew Rowsey, who will sit out this season after transferring from UNC-Asheville, had a good scrimmage as well, showing his range early. He was the third leading scorer in the Big South Conference last season and gives the Golden Eagles a point guard with shooting ability.

College basketball is moving to a 30-second shot clock this season, and it didn’t seem to have much impact on the way either team played. That’s not surprising based on head coach Steve Wojciechowski’s comments at media day. He said the clock change will have little impact, but the refs calling the game tighter could really change the college style.

It’s a transition year for the women’s basketball team, who were picked to finish ninth in the BIG EAST in the preseason coaches’ poll. Only two players return from last year’s squad, and as coach Carolyn Kieger stressed, the team is the youngest in the country. It showed. Both sides suffered from turnover issues and some poor shooting decisions, as the team had nearly as many air balls and bricks as it had made jump shots.

Finnish freshman Olivia Moskari had a good start to the scrimmage with two quick 3-pointers but didn’t try another from long-range afterward.