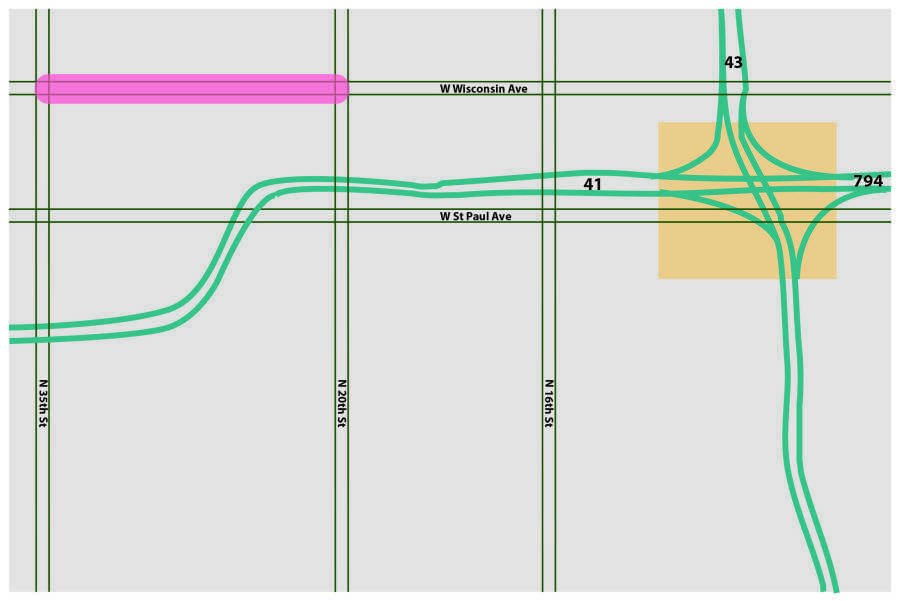 Construction of the Marquette Interchange is scheduled for fall of 2017, highlighted in yellow. The pink line shows the construction set for 2018.

Several new construction projects are set to dig into the Marquette area in the next few years.

“We expect it to take about two and half months to complete,” Pyritz said. “Most of the work can be done in the off hours of the day, but anytime you undertake a larger project there is always going to be an impact.”

A polymer overlay is required to ensure the bridges have a 75-year anticipated life span. The Valley Bridge concrete overlays will have a long-term closure effect on some ramps within the Marquette Interchange.

“We will have more details on any closures in the near future as the design phase progresses,” Pyritz said.

The project is currently in the design phase, and Pyritz said that a lot of work still has to take place. He also said that Marquette does not have a financial impact on this project.

“We look to maximize any large-scale project,” Pyritz said. “We look to do it in quick time, because we realize the business impact it can have on the area, especially around a university.”

Marquette spokesman Brian Dorrington said via email that it is too early to tell the potential traffic impact a project like this could have on the university. He also said that funding for this project was left out of the most recent state budget.

“The Department of Transportation has to go back to the Joint Committee on Finance to seek the authority to fund any potential new projects,” Dorrington said. “Due to this, the I-94 East-West corridor project is one that remains in flux. We will continue to monitor all developments closely to communicate any necessary transportation projects that may impact traffic near campus.”

The Marquette Interchange project is not the only one to take place in the Marquette area. The city of Milwaukee’s Department of Public Works also has plans to reconstruct part of Wisconsin Avenue.

The reconstruction of Wisconsin Avenue is not scheduled to happen until 2018.

“West Wisconsin Avenue is a public right-of-way which runs through Marquette University but is not part of MU property holdings,” Walton said. “The Wisconsin Avenue construction project is being funded with state and federal funds.”