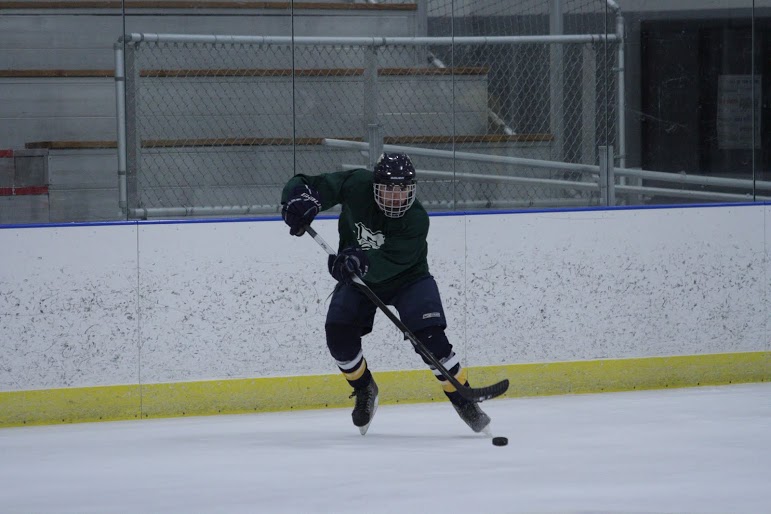 Marquette moved to 5-2-1 on the season after claiming consecutive victories against Northwestern University on home ice this past weekend.

After edging out a win Friday and routing the visiting Wildcats on Saturday, the Marquette club hockey team has now won four straight games, and five out of their last six contests, while remaining a perfect 4-0 at home.

“It’s always great to win at home,” said graduate student forward Christian Leathley. “When you have fans out there it makes the game more enjoyable, and thus raises the level of play.”

On Friday, Marquette opened up scoring with a goal from junior forward Colin Telmanik, his third of the season. The Golden Eagles continued to mount an attack as Chris Dolan tallied another goal in the second period. After allowing a lone third period goal, the game ended in a 2-1 victory.

“We did not have a very good game on Friday,”said head coach Will Jurgensen. “We came out flat and could just never get it going.  We were lucky we weren’t playing an incredibly strong team, but they out worked us for the most part, and we played down to their level instead of playing our game.”

Saturday was a complete turnaround from Friday’s match, as the game was essentially over after the first period where Marquette raced to a 4-0 lead. The team kept pouring it on in the second period, racking up eight goals. The game ended in a 12-0 blow out. Sophomore forward Brian Kennedy had a hat trick, while freshmen forwards Michael Desalvo and Lee Barnes scored two goals a-piece.

“Saturday we came out right away and were a completely different team,” Jurgensen said,  “We got back to playing Marquette hockey, and the final score was a direct reflection of that.”

The team has now scored at least five goals in three of its last four games, but it’s the improvement on defense that’s cause for excitement. The defense has only allowed multiple goals once in their last six games, and averages a stingy 1.88 goals allowed per game.

“They are communicating well and supporting each other, and only allowing one goal was evidence that they are starting to find some chemistry on the back end,” said assistant coach Bryan Daley.

Marquette faces yet another tough test this upcoming weekend as they travel to Minneapolis to battle the Division II Minnesota Golden Gophers. The Golden Eagles have faced only one other Division II team this season – the DePaul Blue Demons – and lost both of those matches.

“Minnesota is another D-two team, so if we can win some games there, it would go a long way for our team once the first rankings come out,” Jurgensen said.

After starting 0-2, Jurgensen has managed to not only coach his team to a winning record, but also helped his team to one of the top spots in their American Collegiate Hockey Association (ACHA) region. As of Saturday’s victory, the team is second in their region with 8 points, trailing only 10-1 University of Tampa, who has 20 points.