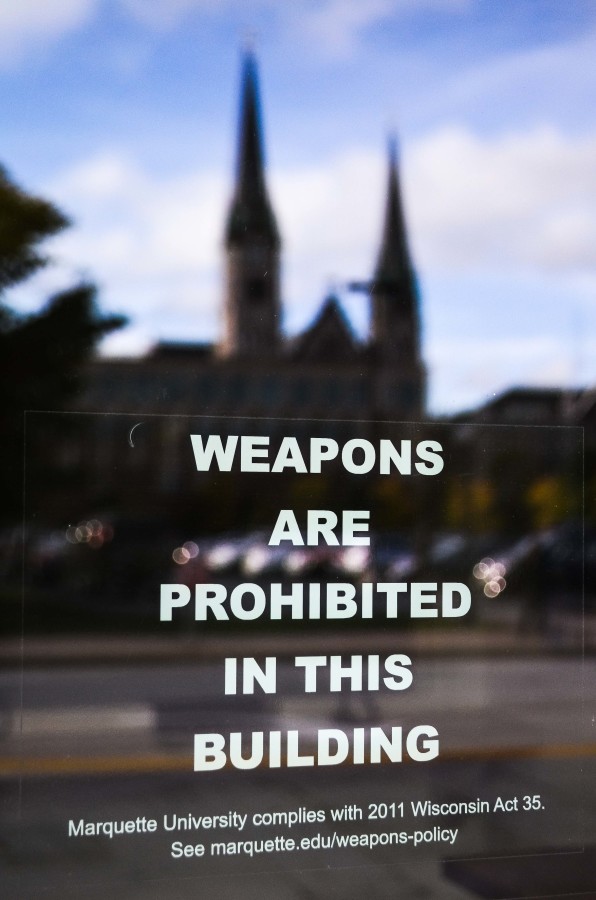 Marquette has an active shooter on campus procedure within their Emergency Procedures Guide.

Last week, the nation was struck with grief again after the Umpqua Community College shooting in Oregon, which marked the 45th school shooting in 2015. This week marks the 41st week of the year. This reality is disconcerting, but more so is the fact that the nation seems to have no idea what to do, despite the frequency of these events taking place. When it comes to what “the solution” is, the individualistic narrative that drives this nation accentuates division and stalls the ability to make advances in combating the issue of school shootings.

Obama observed the routineness of these events and responded with disappointment in how numb the nation has become to these tragedies. Discussing school shootings is a difficult conversation, and there is no quick-fix solution that will last in the long term. While this is a sensitive topic, it is necessary to discuss it from all angles.

As a nation, we continue to emphasize the tragedy of these events as they transpire, but don’t take the time to understand why they persist. Following each shooting, the message moves from tragedy to the blame of ignorance and indifference of others in their lack of action, without actually acting.

Attention shifts to pointing out how one part of the current reality is at fault. The most prevalent examples include the current gun control policy, mental health reform and gun violence. People can lobby all they want, but this issue has many facets. School shootings will continue to impact people unexpectedly when they occur and leave us grief-stricken, confused and bitter as to why they happen.

As for the Oregon shooting, the media did a fairly good job keeping the shooter’s profile silent, but now, the first thing that comes up on Google when searching “school shooting” is a photo of the alleged gunman from his MySpace, which links to articles of various news sites. People could spend time criticizing whether it is necessary for those news sites to post his name and face a week after the shooting, but this would only illustrate further our need to place the blame on someone, or something, rather than admit that we do not have an answer.

It is hard to imagine anyone could ever be fully prepared for an event like this, and frankly, why would we want to be prepared? Some argue preparation would cause people to walk about campus daily in fear of what could happen. Others argue that it isn’t about instilling people with fear, but rather making them knowledgeable about what should be done in the case of something as grave as a school shooting.

It might be nice to know something about what should be done if an incident were to occur. Marquette has a procedure on how to respond if there is an active shooter on campus in their Emergency Procedures Guide. It is the last emergency procedure in the book. This is not a situation anyone hopes to be prepared for, but taking a proactive approach and making ourselves knowledgeable about what should be done if an emergency were to ensue could make all the difference and potentially save lives.

People are quick to blame the gunman or the action (or inaction) of citizens and politicians alike, while simultaneously internalizing their fear, anger and confusion concerning school shootings. Perhaps this is the hamartia that underlies the nation’s cultural narrative of individualism: people share their unique thoughts and opinions with the belief that they hold the unanimous solutions, but don’t understand why they remain divided as a people and stagnant in combating this issue.