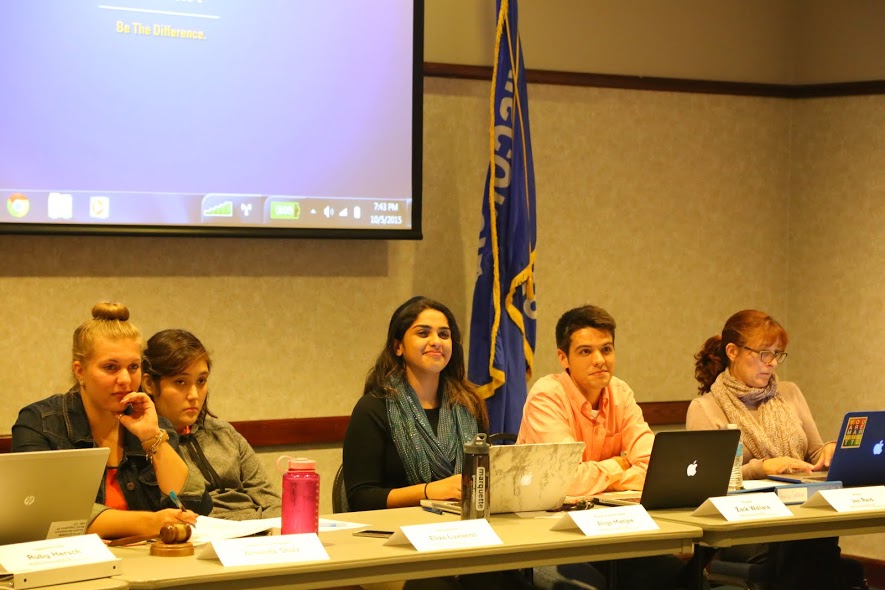 MUSG will vote on the Bublr Bike legislation at their Senate meeing next week. Photo by Yue Yin/yue.yin@marquette.edu

Marquette Student Government will vote on legislation to install a Bublr Bikes station on campus at its senate meeting next week.

The legislation was first introduced at a MUSG meeting on Oct. 5.

“It started with a tweet,” said MUSG President Zack Wallace.

The idea to bring Bublr to Marquette’s campus started early last year when Paige Liberski, a senior in the College of Business Administration, tweeted at University President Michael Lovell.

There is a $50,000 one-time cost to install the station. Strigens and MUSG made a deal to split the fee between the university’s and student government’s finances. MUSG will allocate the $25,000 from its reserve fund.

“The fact that the university is contributing $25,000 shows just how committed they are and they really heard the student voice last semester,” said MUSG Vice President Aliya Manjee. “This is totally student-driven.”

Bublr Bikes costs $3 per half hour of use. There is also an option to purchase a $15 monthly pass for unlimited 60 minute rides.

“We have the lowest cost of entry of any bike shared system in the country,” Hartman said.

The Senate brought up the possibility of paying through Marquette Cash or develop a pass similar to the U-Pass for buses during a conversation about the pros and cons of a Bublr station on campus.

“I think that the resolution is really important to help get more underclassmen off campus,” said Meredith Gillespie, a freshman in the College of Arts & Sciences.

Estefania Ely, a senior in the College of Communication, asked about the safety of bikes during the winter and for students who may be more inexperienced riders. A Bublr maintenance crew takes care of all repairs and additional operational costs. Bublr Bikes are intentionally designed to be more durable for weather conditions and other rough situations.

MUSG tried to establish a bike sharing system in the past. Wallace said these attempts did not work because “it was not a network throughout the city.”

Hartman said that bike sharing has become a national trend across college campuses.

“Many (universities) have tried some form of bike sharing,” Hartman said. “The reason you don’t see a lot of those programs around is because the newest generation of bike sharing incorporates technology, automation and wireless communication.”

“It’s been exciting to hear from (students’) perspectives how important they think these sort of choices are and how much they want to connect to the larger city of Milwaukee,” Hartman said. “Bublr is a great way to do that.”

Marquette’s potential location will be the first one west of downtown.

The first legislation of MUSG will have to pass a vote with a two thirds majority at next week’s Senate meeting to move forward with the decision. The university administration then must approve the legislation. Hartman said the planning takes about four to six months once the decision is made.

“We’ve heard from students for the past couple of months that this would be a great idea,” Wallace said. “This is just one of the many things we’ve been working on and…we have a concrete ability to do something.”