Hockey gets over .500 for first time this season 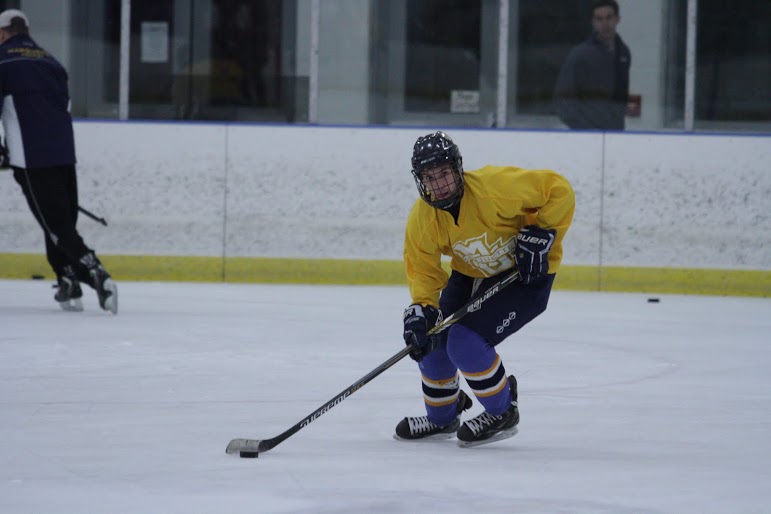 Marquette moved to 3-2-1 on the season this weekend after capturing two victories against Aurora University on home ice at the Ponds of Brookfield.

Friday’s game was a closely fought battle after the first period ended with both teams tied at one after a goal from Golden Eagles freshman forward David Hillen. Marquette found their groove offensively in the second period, scoring four goals to take a 5-3 lead into the third period.

Aurora capitalized early in the third period to make the game interesting, but a Golden Eagle goal with just over nine minutes left put a comeback by the Spartans out of reach, and the game ended a 6-4 victory for Marquette.

Saturday’s match saw a dominant performance from start to finish. Junior forward Johnny Stillman finished with two goals and two assists as the game ended in a 5-2 Marquette victory, dropping Aurora from unbeaten to 4-2 overall in just two days.

Though Marquette won both of their games, one weakness for the weekend became apparent: penalty kills. Three of Aurora’s six goals came on power plays.

“I completely understand that penalties are a part of the game, and I’m OK with a guy getting called for playing hard, but right now we have too many selfish penalties being taken which are hurting us,” said head coach Will Jurgensen.

The team settled into their second game, and played more disciplined hockey, which allowed Marquette to hold Aurora to two goals.

Now above .500 for the first time this season, the Golden Eagles will host Northwestern this weekend for another home stand. The Wildcats haven’t seen much ice action so far this season, coming in with an 0-1-1 record.

“We won both games so that’s something to be really happy about,” Jurgensen said. “It always feels good to get a weekend sweep, so I was glad the guys were able to play hard hockey for the majority of both games.”