Marquette can’t hold on to late lead at No. 7 Notre Dame 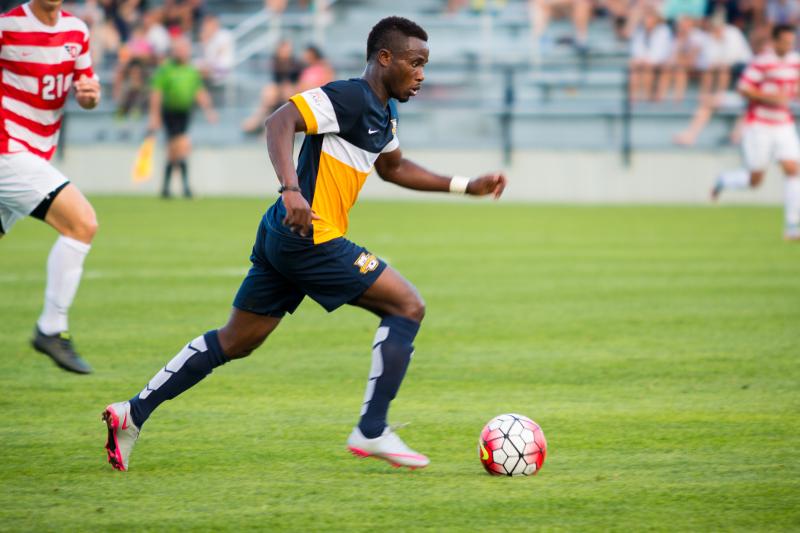 Marquette’s best win of the season seemed just within its grasps. Redshirt senior forward C. Nortey broke a 1-1 tie thanks to a great pass into the box from freshman forward Toby Howell in the 67th minute. It was the perfect reward for the Golden Eagles strong play against No. 7 Notre Dame.

Yet, the Fighting Irish’s impressive offensive unit continued to put pressure on freshman keeper Wicho Barraza. It turned out that a fluky equalizer would bring Marquette back down to earth. The Golden Eagles began to unravel, and Notre Dame stepped on their throats, scoring twice more. The 4-2 final ended up looking far worse than the game action for Marquette.

“I don’t think we’ve played at Notre Dame and had that much of the ball and played that well for long periods of time since I’ve been at Marquette,” said head coach Louis Bennett, who has been at the school since 2005.

Marquette looked great at the start of the game, getting good pressure on the Notre Dame back line. Redshirt senior forward David Selvaggi opened the scoring with a goal off a juicy rebound that put Marquette ahead in the seventh minute. The Golden Eagles had three shots on goalie Chris Hubbard in the first 10 minutes, with two being on target.

The momentum began to move in favor of Notre Dame as the half went along. Forward Patrick Hodan got room in the box to the outside of junior left back Jake Taylor and Barraza, scoring the equalizer 12 minutes later. Bennett said with the offensive talent Notre Dame has, it is inevitable that the Irish will create top notch chances.

“The better caliber the team, the margin of error becomes smaller,” Bennett said. “They are going to create chances. We handed a lot of them well, but there were a couple that obviously we didn’t.”

After Nortey’s go-ahead goal in the 67th minute, the Irish kept the possession in their offensive zone. Michael Shipp lofted a ball from the right of the box. The shot went right to the far goal post, bouncing into the net.

“It was a miscue,” Bennett said. “He crossed it, and it sailed over everyone. No one expected it to go in … It was almost a comedy of errors.”

Notre Dame continued to press and created chances with consistency in its passes. Max Lachowecki’s goal in the 80th minute came off a nice touch from outside the box by Fighting Irish leading scorer Jon Gallagher. Gallagher was sprung on a breakaway by a header from Jeffrey Farina for his goal.

“There was a period where they got a strangle hold on the game,” Bennett said.

The Golden Eagles created a few chances late, but were unable to cut the deficit to one goal.

Marquette will be back in action on Saturday, when the team heads to Villanova for its second BIG EAST contest. The Golden Eagles may be without Selvaggi, who tweaked his hamstring in the second half.

The Wildcats are 4-3-0 on the season, and will be well rested for the Marquette match. Villanova last played on Saturday in a 3-0 loss to Butler. It will be a chance for the Golden Eagles to move up in the RPI. Marquette is ranked 74th, while Villanova is 58th. Those rankings were compiled before the loss against Notre Dame.

“We’ve got six teams left with a higher RPI than us,” Bennett said. “We realize that if we win games we’re going to go up in the RPI Rankings. If we’re 32, we’ve got a good chance of making the tournament.”