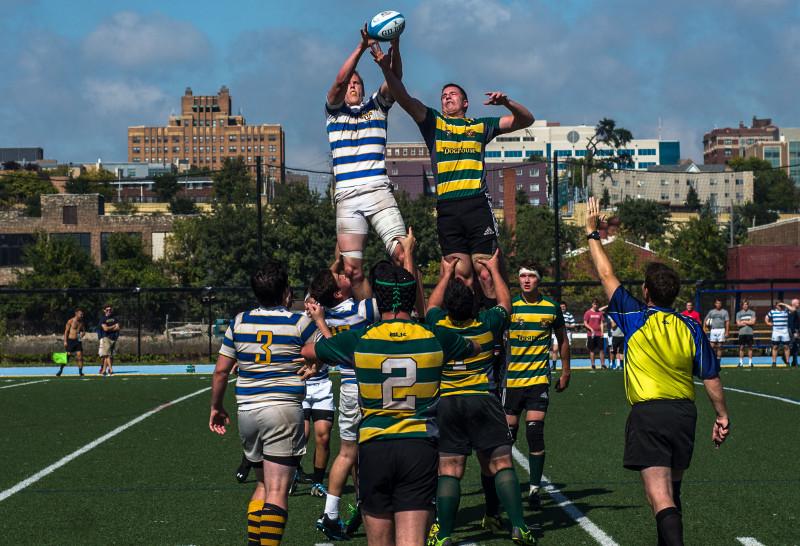 The 2015 season has not been an easy one for Marquette Club Rugby. Midway through the season, it sits at 0-3. Despite that, the club remains excited and optimistic, as players and coaches look at the bigger picture. It’s a rebuilding year for the program.

The biggest facet of rebuilding is the club’s new coach, Constanz Hartney. Despite having just three games and a handful of weeks together, players are already excited about the club’s future under Hartney’s tutelage.

Club president Ryan Howell believes the club got it right by bringing in Hartney.

“I’m very impressed with him, he hasn’t been discouraged at all with our losses, in fact he’s still very optimistic,” Howell said. “The players love him and he knows what he’s doing.”

Hartney is a 70-year-old clinical psychologist with a doctorate from Marquette in sports psychology. He grew up in South Africa before attending Marquette for graduate school. A rugby player in high school, Hartney attended some Marquette games as a graduate student. He found himself offering the team his assistance.

“I attended some of the games, looked around and they didn’t seem to have a coach there,” Hartney said. “I just walked over and said, ‘you guys are doing it all wrong’, and gave them a few exercises to do and they said, ‘you wanna come coach us?’ and that’s how I became a coach.”

“I amassed an impressive record with the team then, and I think in my last season we only lost one game,” Hartney said. “A marginal score against (Wisconsin-Madison), who went on to win the conference, but we beat everybody else.”

He stayed in touch with all his former players over the years. He rattles off their professional accomplishments: judges, surgeons, university professors, and even actor Chris Farley.

“The only time he was serious was on the field”Hartney said about Farley. “He never joked or played pranks on the field. Off the field, he was a different person and difficult person to manage, but all serious on the field. He played a really good game, I enjoyed him.”

Hartney left the club to focus on his profession and family, but remained in touch. This year he stepped back into the coaching role for the first time in decades, and realized that both he and the game had changed.

“One of the players from those teams – his son is on this team now,” Hartney said. “So I’m a grandfather.”

The son’s experience with the coach will be slightly different than the one his dad had, Hartney said.

“I’m a bit more understanding of mistakes and flaws, that kind of thing,” Hartney said. “I think that works better, the mistakes are fixed more easily when you take the time to approach, rather than the drill sergeant approach.”

Vice president Danny O’Hara said that an important difference between this year and previous years is the improved coach-player relationship.

“He definitely comes to me more often after practices and games with what he wants to do more than the previous coaches and captains,” O’Hara said. “Our (relationship) is much more closer and much more of a two-way street. He takes my input and I take his, and before it wasn’t really like that.”

Hartney thinks that part of his coaching has improved since his last time as the club’s head coach.

“I take the opinions of the captains and some of the players more at heart,” Hartney said. “Instead of just dismissing them right away or not even listening to them.”

Hartney believes his first year is about laying the building blocks for success in the future, and patience is key, as hard as it may be.

“I’m a bit impatient,” Hartney said. “I really have to watch that, I have to stick to my goals as foundation building and so on. If we get a win, we’ll take it, but our main goal is team-improvement and to build a team.”

In previous years, three straight losses probably would not have been met with as much optimism that is coming from the team. With this team, though, Hartney can see a different energy among the players.

“Our guys almost seemed to be demoralized at the end of last season, I didn’t see much team spirit,” Hartney said. “But this year, you can see it coming together. It’s just beautiful to see.”

“In all of our games, we’ve just played better and progressed throughout so it’s been good to see the very quick development of the younger guys,” O’Hara said.