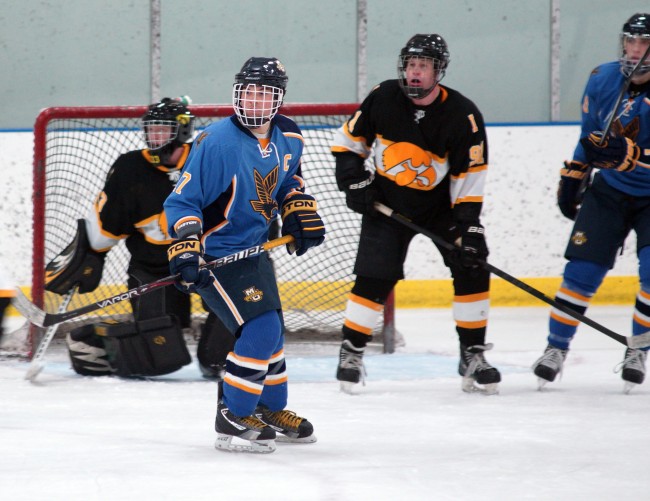 The Marquette Men’s Club Hockey  was able to find some redemption during their weekend series against Robert Morris-White, the team that ended their postseason run last year.

Friday’s game was scoreless after the first period, but the floodgates opened for the Golden Eagles as they scored seven goals in the final two periods. Sophomore forward Brian Kennedy opened up the scoring onslaught for Marquette early in the second period. Five different players followed his lead and tallied goals, including freshman forward Lee Barnes who scored two goals in the game – one in the second period and one in the third.

“A huge part of our success on the offensive end was our power play,” Barnes said. “We got a lot of good puck movement and did a great job getting net front presence.”

The game ended as a 7-1 victory for Marquette, and the team earned their first win for the year.

The second game of the series was much closer. With the team down 1-0 and 3:26 left to play in the third period, junior forward Johnny Stillman notched a critical goal.

“The guys faced a solid goaltender and some adversity from the officials, but they didn’t stop playing our game, and Stillman’s goal to tie it was a direct result of that effort,” said head coach Will Jurgensen.

Stillman’s heroics tied the game and forced overtime, but Marquette eventually fell in a shootout, dropping their overall record to 1-3.

Considering the high quality of teams Marquette has faced early this season, there’s no reason to be discouraged by a losing record. The Golden Eagle’s high scoring game Friday offered signs that the team has found a way to make their offense click.

Perhaps more importantly, the team found a way to stifle a high-power team that scored seven goals on them last postseason. Marquette’s stingy defensive performance this weekend allowed only two regulation goals, and demonstrated a tremendous improvement from last week’s eight goals let in against DePaul.

“The credit there goes to the defense, who all had much better games compared to last weekend,” Jurgensen said.  I still think we need some work on our gap control but overall our defensemen played well.”

“A big takeaway from this past weekend is coming from behind on Saturday and tying the game up on a big goal late in the third by Johnny Stillman,” Barnes said. “It just showed us that we’re never really out of a game and was definitely a good confidence booster.”