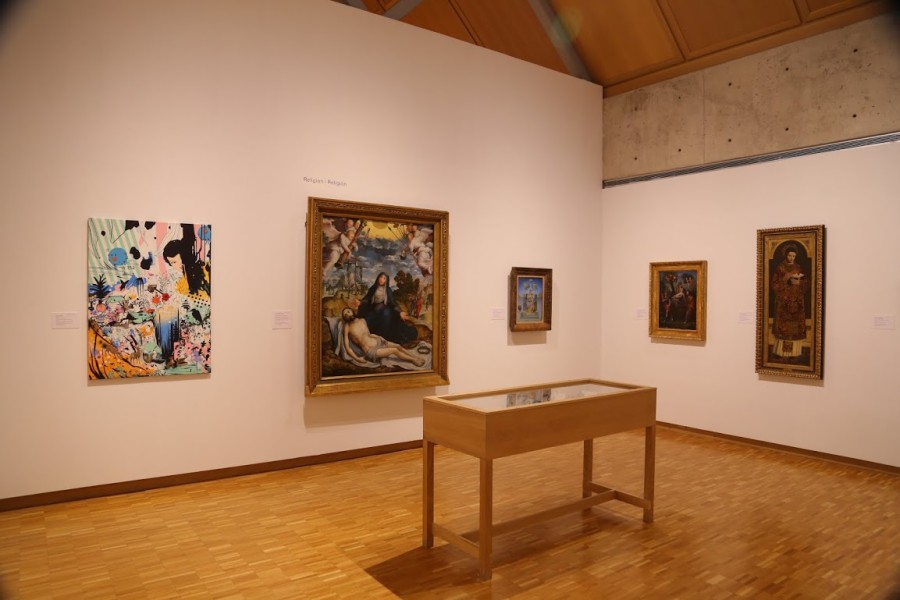 “What is Hispanic?,” the Haggerty Art Museum’s new exhibit, takes a look into the Hispanic identity and what it means to the Spanish-speaking world. Each piece reveals personal stories on the artist and will be on display until Dec. 23.

Created by Scott Dale, associate professor of Spanish, the exhibit aims to continue the discussion of the word Hispanic. Dale said his upbringing in Southern California inspired his interest in the subject.

“I lived in an area where all the streets had Spanish names and so I was wondering, “where do I live?” “Why are all the street names and city names in Spanish?” And so that piqued my curiosity. I wanted to know about the land and where I lived and its history and my role. Who am I in this context? It’s a continuation of all these questions I had when I was a 10-year-old.”’

The U.S. census says anyone who is Latino or Hispanic is “a person of Cuban, Mexican, Puerto Rican, South or Central American, or other Spanish culture or origin regardless of race.” It is a foggy definition because the word ‘culture’ is subjective to each person. Determining the limitations of this fluid term is almost impossible, but Dale offered one key feature that relates to the Hispanic identity: the Spanish language.

“I studied and researched (the artist’s) backgrounds, and I wanted to be convinced that the youth of each artist was based in a Spanish-speaking household,” Dale said. “For me that was very important.” He believes the language is at the core of the Hispanic identity, along with an access to values and cultural identity.

The exhibit is divided into eight sections: Dolor (pain), Comunidad (community), Carácter (character), Identidad (Identity), Trabajo (work), Humilidad (humility) and Reinvención (reinvention). Each part highlights a general theme in the artist’s work. Many prominent works from people such as Salvador Dali, Pablo Picasso and Diego Rivera make up the exhibit. The paintings span across decades and even centuries, with some from the second half of the 1500s to others painted as recently as 2012.

Noelia Farias’ painting “A La Espera” (Waiting) presents an eerie background with a small girl painted in dark blue and yellow kneeling beside a black humanoid mass. Someone might ask what is she doing there? How are the two figures related to each other? For Dale, the piece of art poses a question without suggesting an answer.

The exhibit also includes a space between the paintings to engage the audience. A small table with pencils and sticky notes invites viewers to answer the question, “What is Hispanic?” and stick their answer to the wall.

The exhibit is a chance to showcase unique pieces of art that portray the diverse expressions of Hispanic identity. Dale urges people to come ready for full examination of the elusive word “Hispanic,” as well as with an open mind to think about the question, “What is Hispanic?”