COMSTOCK: To my little sister: don’t be just another bystander 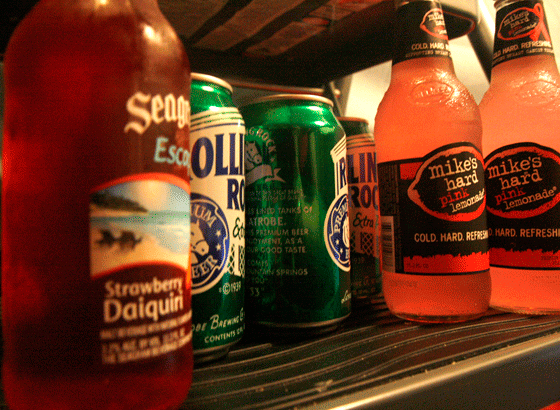 Beer and Hard Mike's Lemonade are propped on a fridge. Photo by Brittany McGrail/brittany.mcgrail@marquette.edu

Tears were certainly shed that August morning. The family car was packed to the brim with every state-of-the-art Container Store dorm organizer we could find, and the Mizzou car decal was proudly displayed next to Marquette’s. My sister Colleen gave me one last hug before leaving for the six-and-a-half hour journey to Columbia, Missouri. Her parting words: “You taught me everything.” That was a terrifying thought, but nonetheless, brought on another tsunami of tears.

I spent the rest of that day pacing around my house and freaking myself out with every possible worse case scenario. “I hope she doesn’t walk home alone, I hope it’s a safe campus, does she know she can call?” I found myself texting her every half hour or so asking for updates on her first night out. I’m really fun, I know.

The reality is Colleen deserves every bit of my confidence. She is responsible, compassionate, and not afraid to stand up for herself and others. She is everything you would want in a daughter, sister and friend. But I couldn’t let her leave without reiterating the same thing over and over again: do not be afraid to intervene.

After doing a presentation on the bystander effect last semester, I became intrigued and shocked by it. For those who are unfamiliar, it’s a concept in psychology that suggests your chances of being helped in an emergency situation decrease as the number of bystanders increase, which seems counterintuitive. Psychologists explain that humans tend to subconsciously divide responsibility amongst everyone else around to the point where they do not feel responsibility at all. The effect increases when bystanders see other bystanders not reacting to an emergency situation. In other words, people tend to assume others have the situation under control.

You might be sitting there and thinking there’s no way you wouldn’t intervene if you saw someone lying on the ground in a public place, but there’s a good chance you wouldn’t. What is more concerning is that the bystander effect doesn’t suggest those who don’t intervene are callous or ignorant at all, but rather that they’re very normal.

I cannot think of another environment where the bystander effect is more dangerous than college campuses. Every weekend across the country, there are students facing life-threatening situations fueled by alcohol. It could happen to anyone. It could happen to my sister. It has happened to people I know.

Many of us have experienced a vomit-filled night that turned from fun to scary very quickly, and we can’t fall victim to the bystander effect. There’s a chance your friend is not just passed out. There’s a chance they need help. When Indiana University freshman Rachael Fiege fell down the stairs in August 2013 on her second night on campus, friends left her on the couch. They did not call 911 until six hours later when Fiege wasn’t responding. Rachael died of a head injury. It didn’t have to end that way, and it broke my heart.

A friend of mine can attest to the fact that the bystander effect is very real on college campuses. Shortly after getting to a party at her university, my friend saw a friend lying over a table with foam and drool coming out of his mouth. Alarmed, she asked everyone what was going on. They said he was fine. My friend called people to pick him up and take him to the hospital while other guests yelled over her phone calls saying she was overreacting and being “crazy.” She finally found a driver who agreed. The boy blew a .46, and doctors said he should have been dead. Because of my friend’s intervention, that boy’s parents will see their son graduate. They’ll see their son get married. Maybe they’ll see him have kids of his own.

This story is not uncommon, but this friend’s reaction unfortunately is. Universities can provide as much alcohol education as they want, but ultimately, it’s up to the students to go against the crowd and take action. A thank you is in order for all those students like my friend who did not get the recognition they deserved for saving a life. I believe you will be rewarded in ways you won’t expect in the years to come. You will be leaders wherever life takes you. .

So, to my sister, I love you. I am in denial that you’re not that little anymore. Have fun, speak up, and stand your ground. I know you will. You might just save a life.