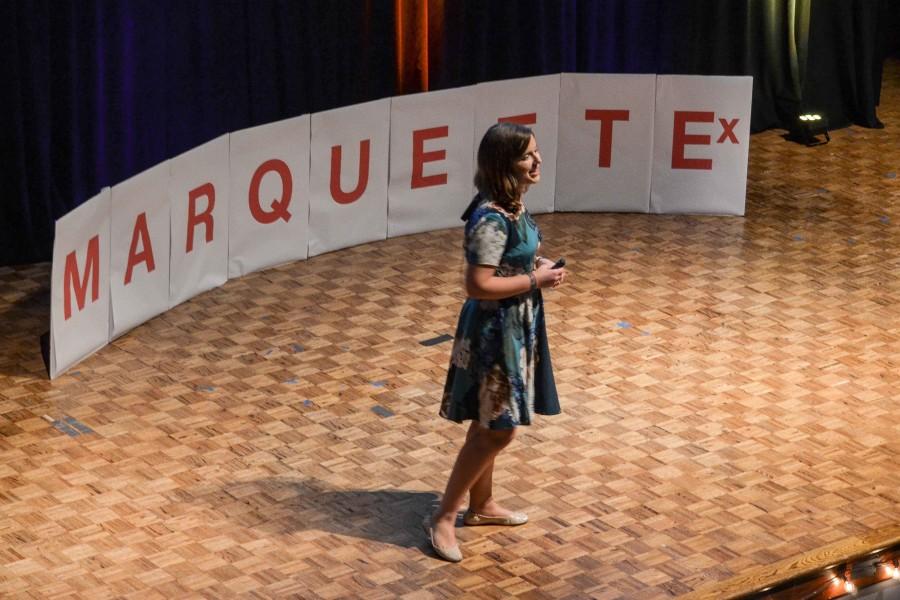 Jane Lorenzi gives her speech at the event. Photo by Matt Serafin /matthew.serafin@marquette.edu

Nine students spoke to an audience of more than 100 people for the first MarquetteX event Sept. 17 at Weasler Auditorium, kicking off this year’s Marquette Student Government Speaker Series.

The event’s hosts engaged with the audience via texting poll about issues related to the speech topics.

Samuel Wesley, Junior in the College of Business Administration
Wesley began the night with a proactive message to never give up, even though “the circumstances may never be right.” He shared his obstacle-filled journey about starting his company Sevia Technologies, which manufactures athletic garments that wirelessly report muscle activity and range of motion to game-fled software.

His company was named a finalist in Mayo Clinic’s Think Big Challenge and a pilot program for it will begin soon.

Phil Batzner, Senior in the College of Communication
In his speech titled “The Power of Three,” Batzner introduced himself as an avid Golden Eagles fan, a guy who is able to tie his own bow tie (which he wore) and someone who has struggled with depression and anxiety over the past five years. He said a Japanese teaching says everyone has three faces: one to the show the world, one to family and friends and one to nobody.

His speech emphasized the importance of sharing the hidden face with loved ones to grow relationships.

Esther Avilés, Sophomore in the College of Arts & Sciences
A slide stating “ignorance is the single greatest tool of oppression” was behind Avilés as she put the meaning of feminism, privilege and intersectionality into perspective through her research and rhetorical questions. Her speech challenged gender and racial norms with a simple message: “let yourself be uncomfortable.”

“I think she presented her thoughts really well,” said Nadav David, a senior at Northeastern University who was invited to the event.

Kim Baker, Senior in the College of Health Sciences
“I feel a really positive energy here,” Baker said at the beginning of her speech. Her presentation, “Five Steps to Bettering International Development,” developed after her experience with Global Brigades.

Ben Hofman, Senior in the College of Communication
Ben Hofman, a doodler and seven-year cancer survivor, spoke about the role that doodling played in his recovery.

“We all have a creative fire inside,” he said. “We just have to focus to ignite it.”

Katie Collins, a junior in College of Communication, said she was impressed when Hofman talked about his diagnosis.

“It takes a lot of guts to go up there and say that in front of everybody,” she said.

Markie Pasternak, Senior in the College of Arts & Sciences
Like Hofman, Pasternak was diagnosed with a life-changing medical condition.

“I would get lost in time,” she said, explaining what it is like to have Highly Superior Autobiographical Memory. According to the MarquetteX Facebook event page, she is one of 55 people in the country who have been discovered as having this condition.

People with HSAM remember many more details than the average person and recall more about their daily life experiences. Pasternak said she’s is optimistic about her diagnosis because the lessons she learned from her library of memories have made her who she is.

“Even though she has this crazy ability to remember every moment, it should be each of our responsibilities to try and remember to be in the present,” said Connor Morris, a senior in the College of Education.

Giulianna Sutkiewicz, Senior in the College of Arts & Sciences
Sutkiewicz went from the girl who was good at math in middle school to the executive director of Marquette’s branch of Women and Youth Supporting Each Other. She said WYSE is a middle school mentoring program for girls to “give them the tools and empowerment for them to make their own decisions.”

Sutkiewicz said her experience with WYSE became her own empowerment tool.

Martin Rodriguez, Junior in the College of Engineering
Rodriguez is working to break cycles of disease and poverty one nebulizer at a time. He works with Marquette to develop electricity-free nebulizers that help those suffering from respiratory diseases.

He said data from the World Health Organization shows a correlation between high incidences of respiratory disease and places with unreliable electricity.

Jane Lorenzi, Sophomore in the College of Arts & Sciences                 Lorenzi’s speech titled “The Power of Dialogue” began with her memorable encounter at a bus stop last January. A man approached her asking about the Whole Foods bag in her hand and inquired about the price of food at the store.

This interaction inspired her to engage with her community and made her realize the privilege she experiences. Lorenzi said she believes dialogue is the resolution for bridging racial, social and economic gaps between individuals.

“Dialogue helps us to acknowledge the dignity of another person’s soul,” she said.

Lorenzi’s name repeatedly rolled off students’ tongues after the event.

ATTENDEE RESPONSES
“It just shows how many amazing people are at this school,” said Nicole Rizzo, a junior in the College of Communication, about the event. “You just don’t realize how awesome people are until you hear them tell their story.”

The event’s organizers said MarquetteX may become a tradition in the future.