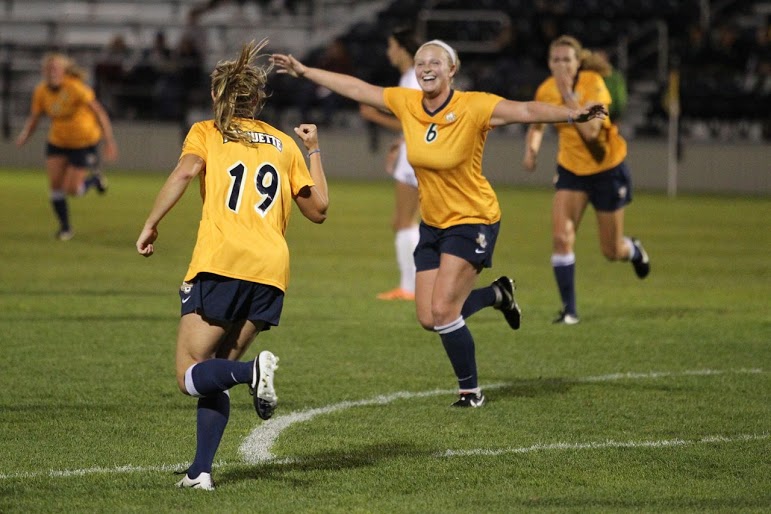 For the first time in nearly a month, the Marquette women’s soccer team will play away from Valley Fields.

After wrapping up a 2-2-1 home stand that began before classes started, the Golden Eagles will head south for two matches against South Alabama and LSU. With the BIG EAST slate set to kick off next weekend, two positive results are crucial to help the team get over the .500 hump.

“It has been nice being at home so much recently, but I think being on the road will be good for us and challenge us even more heading into BIG EAST play soon,” junior center back Erin Holland said.

Both matches certainly won’t be easy for the ladies. Thursday’s match at South Alabama will pit them against a 5-2 Jaguars squad who most recently played to a tight 2-1 loss to No. 9 Auburn. Sophomore Charde Hannah, the 2014 Sun Belt Offensive Player of the Year, scored 20 goals in 23 games last year, which tied for third in Division I. Her five goals so far this year leads the team.

Sunday’s match against LSU features another lethal scoring threat in sophomore Jorian Baucom. The forward has already tied her goal total from all of last season, having notched eight so far this season, tied for second in Division I.

Despite facing off against two of the top offensive weapons that they’ve seen this season, head coach Markus Roeders says his team will stick to the usual game plan this weekend.

“Most of the teams that we’ve played this year that are strong offensively, I think we’ve done a pretty good job of shutting them down,” he said. “I don’t think there’s going to be extra focus on double teaming… but I think defensively in general we’re going to have to continue to be tight.”

Part of the reason for Golden Eagles have allowed one goal or less in six of seven matches has been the combination of Holland, junior center back Morgan Proffitt and senior keeper Amanda Engel clogging the 18-yard box. Since moving back into the starting lineup, Holland says the familiarity of working with Proffitt and Engel is beneficial to the young back line.

“Since Morgan and I played in the back line together last year, I think this year we kind of know how each other play and are more comfortable playing together,” Holland said. “Having Amanda behind us helps a lot too, because she has more experience than any of us.”

The focus, Roeders said, will be getting the forwards to score consistently. While redshirt sophomore Molly Pfeiffer has converted all three of her shots on goal to lead the team, opposite starting junior forward Darian Powell has netted just one of her twelve shots on goal. Juniors Liz Bartels and Ashley Handwork are following the same trend.

“I think overall our forwards have to be a little more clinical and a little bit better on the finishing aspect,” Roeders said.

Marquette will return to Wisconsin next week to reignite the Milwaukee Cup at UW-Milwaukee on Wednesday evening.