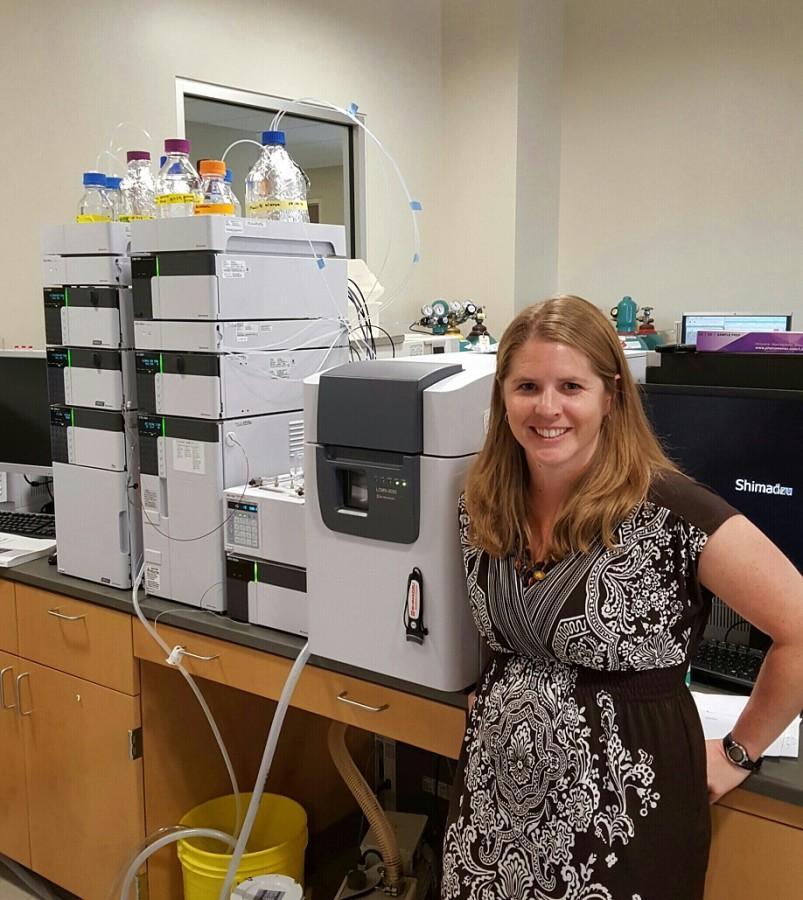 Engineering professor Brooke Mayerstands next to a compound analysis machine in the Water Quality Center. Photo by Dana Warren/dana.warren@marquette.edu

A $200,000 federal grant given to College of Engineering professors in March has been helping them research the removal of water contaminants via electrocoagulation (EC.)

“The grant covers the entire project and in that project a lot of the funding goes toward supporting the graduate student research assistants who work on it,” Mayer said.

In addition to helping the team do more in-depth research, the grant provides stipends and tuition money to the two graduate students who help with the research over a two-year period. The money is also used to create reactors in the testing environment and purchase other necessary research supplies.

The research team also consists of three professors. Mayer said she will mentor one of the graduate students to research the virus aspect of the research, which she noted is part of her background.

Meanwhile, McNamara will work with the other graduate student to investigate estrogenic micro-pollutants. Mayer said Zitomer “is linking all of (the research) while looking at overall optimizing system processes” between the two sub-teams.

“In the end it gives (the money) a lot of strengths in different areas that they would not be able to combine without the grant,” Mayer said.

EC is not a standard process for removing impurities from water. This is in part because there is not a thorough understanding of how and why the process works. As a result, the team will use the standard process of coagulation to investigate EC’s effectiveness.

EC is a chemical and physical process that has not yet been tested on a large-scale but is not uncommon in smaller-scale practices. Mayer said some corporations use EC systems to reduce wastewater output.

Cities and corporations differ because companies tend to have “highly-polluted and low-flow” water systems versus a city’s more “diluted flows at higher volumes,” Mayer said.

Due to a lack of previous research, the team decided to investigate certain types of contaminants on the Environmental Protection Agency’s “Contaminant Candidate List” and uncover their effects on public health. The agency has not deemed them dangerous to public health but has labeled them as priority research candidates.

While there is not much research on the topic of EC, this research will build a case for the process’s effectiveness in the future.