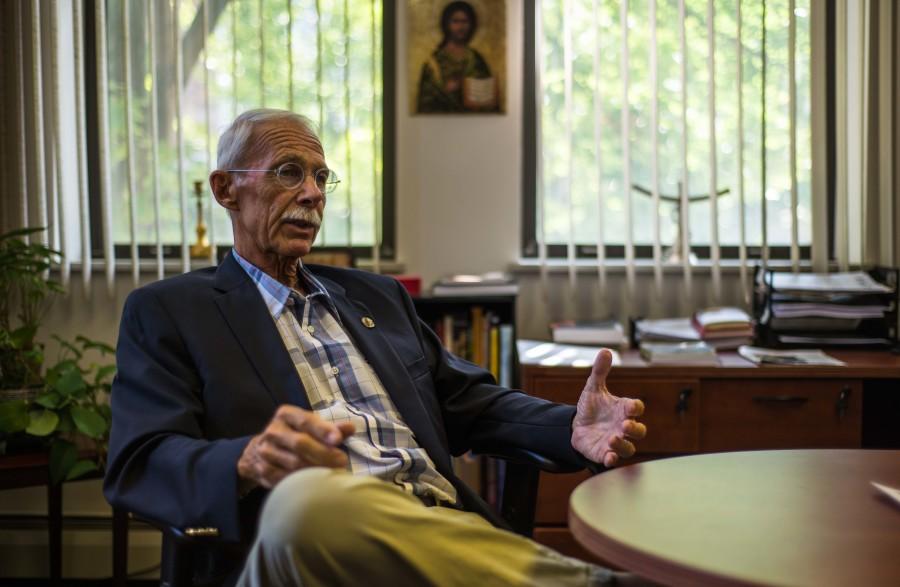 The Rev. John Schlegel, pastor of the Church of the Gesu, has almost 1,200 pictures on his phone. They include an infant’s baptism, his twin great-nephews and a war between a cat and a squirrel in front of Raynor Library. While flipping through them, he stumbled upon one taken in a hospital.

“My last hospital visit,” he said with a laugh. “I got everything on here.”

He’s listening to a classical music station based in New York. Cards and letters with warm wishes sit on his desk. His computer screensaver circles through photos from England and Italy, also taken on his phone. The photos are all part of his “kaleidoscope of visual memories” collected during his travels over the past several months.

Schlegel, 72, was diagnosed with pancreatic cancer in late January. He was told it is inoperable. He announced his diagnosis in a letter to his congregation, saying he would use palliative treatment–no chemotherapy or radiation.

Since the diagnosis, he has traveled to many places from his past to visit friends, family and former colleagues. Those include his hometown in Iowa, Creighton University in Nebraska–where he served as president for 11 years–and the Vatican in Rome. A photo of him meeting Pope Francis hangs in the hallway of Gesu’s parish center.

“I must say, the way I’ve decided to do it my way has really worked out really well,” Schlegel said. “Without the baggage of chemo and radiation, I’ve really had a high quality of life. I’ve had the opportunity to travel widely.”

Margi Horner, director of liturgy at Gesu Parish, has worked with Schlegel throughout the journey of his illness. She said she has seen God’s mercy and grace in Schlegel.

“We who work with him here at Gesu, we really have been walking with him as he’s gone through the ups and downs over the past few months,” Horner said.

After Schlegel announced his illness, Horner said the parish office staff placed a large basket in his office to collect the letters and cards he received. She speaks to parishioners nearly every week and they ask how he is doing.

Despite all of his travels, Schlegel missed only one Sunday at Gesu.

Schlegel said fear is a genuine and human response to his situation. Though he fears the unknown, he most fears aspects he knows are in his control.

“The big one is: have I truly been a forgiving person when all is said and done?” he said. “Are there individuals or circumstances out there that I could be more understanding of or forgiving for?”

In the past few months, Schlegel said his faith didn’t change but his spiritual life grew richer and deeper. He learned to allow God complete control in his life.

“Across the years, I was a little reluctant to let the Lord all the way in my spiritual life, but now that I’m in this situation, I just fling the door wide open, and he’s welcome to come in and do anything, say anything and tell me to do anything he wants,” Schlegel said.

“We are all called to have some impact in others lives,” Horner said. “The Marquette model is to be persons for others and to care for the person. That was personified in the way people reached out to him.”

By accompanying Schlegel through his journey, Horner said she learned valuable lessons.

“I’ve tried to be more attentive to people,” Horner said. “It makes you realize life is precious and at times life is fragile, and you never know what the next person is going through.”

Schlegel spent 40 years in higher education. He was the dean of the College of Arts & Sciences from 1984-88. In addition to Marquette, he held positions at John Carroll University, Rockhurst College, the University of San Francisco and Creighton.

“For college kids, faith is maybe not in the top 10, but I would say give it a shot,” Schlegel said. “Wrestle with it, question, doubt, wander and see what happens. I think faith of any denomination is really an enriching part of one’s life because you can find that comfort zone with it.”

Matt McDonald, a fourth year dental student, has been a member of pastoral council for three years. He recalled times Schlegel impacted him as a student, including when he worked on a dental clinic proposal.

“I really like the way he leads,” McDonald said about Schlegel. “He’s very intellectual and smart, and has a lot of successes.”

Upon learning about Schlegel’s illness, McDonald immediately wrote him an email and said he was praying for him.

Schlegel suggests that students build a strong self-identity. He advises them to take risks, explore the world and explore new ideas.

“A mind stretched by a new idea never goes back to its original dimension,” Schlegel said. “Education is meant to stretch the mind and allow you to develop new ideas, a new sense of self, a new sense of purpose and a new sense of objective.”

In the Gesu bulletin distributed the weekend of Aug. 23, Schlegel announced that he is curtailing his schedule and delegating pastoral duties to the Rev. Roc O’Connor.

“I am mindful of the gift Pope Benedict XVI gave the church when he prayerfully stepped aside from his duties in order to allow the church to move forward and make a change,” Schlegel said in his announcement.

His bucket list is depleted–though he is looking forward to seeing the altar carpet replaced after $30,000 was raised for it. Three carpet samples sit on a table in his office–burgundy, indigo blue and steel grey. Parishioners will vote to decide the winning color.

The Rev. Tom Lawler, provincial of the Wisconsin Province of the Society of Jesus, will determine Schlegel’s successor. He said the formal selection process hasn’t started yet, but when it does he will consider parish input before presenting a recommendation to the archbishop. The process usually takes between several weeks to a couple of months.

Schlegel delivered what he called his last sermon on Aug. 30. He told parishioners to have gratitude for all the gifts they’ve been given and to trust in the Lord.

“I’m going to buy tickets to see the symphony,” Schlegel said. “How’s that for having an act of faith? It’s not going to end tomorrow.”