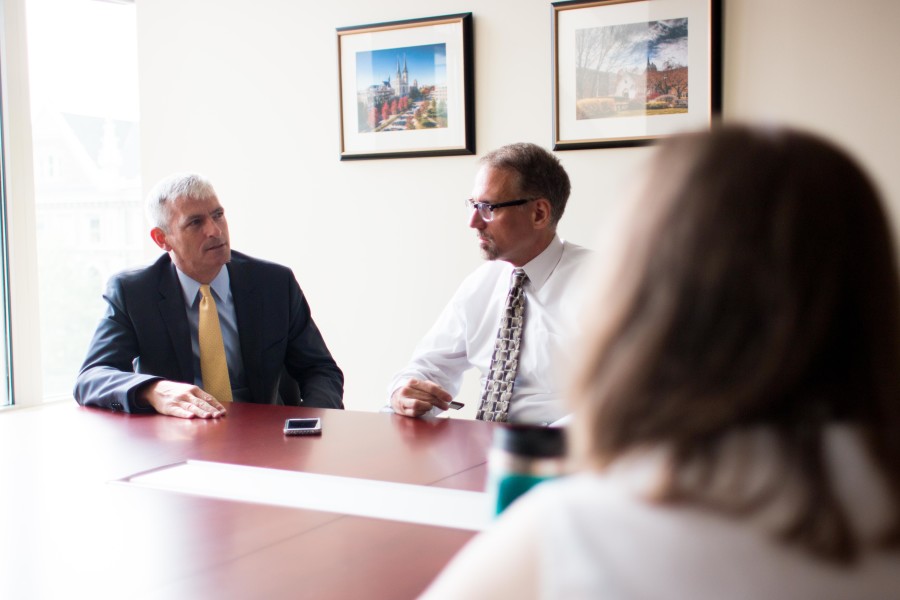 The Wire sat down with University President Michael Lovell and Provost Daniel Myers to talk about the 2015-’16 school year.

Below is an abridged transcription of the interview as well as the audio from it.

Marquette Wire: What plans and expectations do you have going into your second year?

Michael Lovell: “I’m most excited about the fact that we’re doing master planning for the campus, and we’ll have that process completed probably around March. That’ll help us decide what capital projects we execute over the next five to 10 years. Things like which academic buildings are going to be next, dormitories, recreational space for students. The master plan will really help us determine where we’re going to invest next so I’m excited to see what the campus may look like going forward.”

MW: You’ve been provost since July 1. What are your first impressions of Marquette, and what do you think about our core curriculum?

Daniel Myers: “My first impressions of Marquette have been incredible, the people here have been so welcoming. It’s been an exciting experience for me just to see how energized everybody on campus is. I think President Lovell has done a terrific job of getting people to look forward over the past year and think about exciting new things we can do. That’s my first impression. I think we’re going to have a great time coming ahead with many new things that are going to emerge from the faculty, students and staff.

“The process is just beginning to re-examine the core curriculum. We’ll have a couple years of taking a very detailed look at that in a way that involves students and faculty to really decide what that core element of the education at Marquette is going to be. The core curriculum is a really important piece in defining what a university is, so we’ll want to think very carefully about that, but we’re just starting that process.”

MW: This past year you announced that Marquette is expanding their role in the growing water sector, with our space in the Global Water Center, what do we plan to do it with as a school?

ML: “Right now we’re building out the sixth floor of the Global Water Center. We just launched the innovation projects that we funded last year through the innovation-fund process. Seven of those projects relate to water, and many of those projects are going to actually be executed down in the Global Water Center so our faculty, staff and students will be moving in before the end of this year and start working on their projects. We’re really excited to be part of what Milwaukee’s becoming known for: a place where people from around the world can come to get their water problems solved.”

MW: What is the university’s partnership with the Milwaukee Bucks like now with the new arena?

ML: “Oh, that’s another very exciting project for us. We think about what we’re doing over on Michigan Street on the new land we purchased, building out the Athletic Performance Research Center, in partnership with the Bucks. They hired Troy Flanagan, who designed the athletic performance research facility for the U.S. ski team. He’s got an adjunct appointment now with us so he’s working with our faculty, staff and students on what that space is going to look like.”

MW: The Marquette Police Department has 36 sworn-in officers and is starting its first school year operations. How do you want campus crime to change with the new force in place?

ML: “We’re already starting to see some immediate impact. We just got the numbers yesterday about crime last summer compared to this summer. Crime has been reduced by 47 percent on our campus since we’ve commissioned the police force, compared to last year.”

MW: Provost Myers, you announced that the university will phase out the College of Professional Studies throughout this academic year. Besides the Future Milwaukee program and keeping one of the college’s majors in the College of Arts & Sciences, are there other ways that Marquette will provide higher education to non-traditional students once the college is gone?

DM: “The other majors that were part of CPS will continue for the students who were already enrolled in them. We’re not admitting new students to those for this year so we can figure out how to best fit them into the College of Communication and College of Arts & Sciences. But we want to continue to find new ways to provide education for people who want that kind of adult-continuing education in their lives here in Milwaukee. So we’re going to try to find new ways to do that, and we’re going to try to marry them up with programs we already have in the colleges to make things more efficient. We’re not giving up on that line of work at all; instead, we’re trying to realign it in a way that’s going to be more efficient and allow us to do a better job of meeting the changing needs of the market around us.”

MW: This is the first summer in recent years where incoming freshmen didn’t participate in the First-Year Reading Program, which was temporarily cancelled before you started in February. What are your thoughts on the program? Is there a plan to bring it back in the future?

DM: “As a matter of fact, there is. We have a number of ideas about the reading program that we’re talking about right now. We’re going to involve students in doing some planning for the next round of that. I’d really like to expand it to be a campus-wide reading program. That will be one aspect of it, but we’re talking about the content and other events that will accompany it as we get it restarted for the following year.”

MW: With taking new safety precautions with the police force, how do you want Milwaukee’s Near West Side Partners program to help reduce crime as well and make our shared neighborhood a better community?

ML: “I did launch the President’s Task Force on Equity and Inclusion last year, and those groups have been continuing to work over the summer. I’m very encouraged by some of their suggestions, and many of the students who were part of the protests are part of helping us determine what the solutions are to make the campus better for everyone.”

MW: President Lovell, will you still have your running group with students?

DM: “It’s the president’s running group, but I tag along. I try to keep up.”

MW: Are you planning to do anything new with it?

ML: “The big thing is we want to get the new freshmen on board and make them aware and have them be a part of it as well. We have about 100 faculty, staff and students preparing to run the Lakefront Marathon in early October, and we want to continue that. It has been a lot of fun for us, getting to know the campus community in that way.”