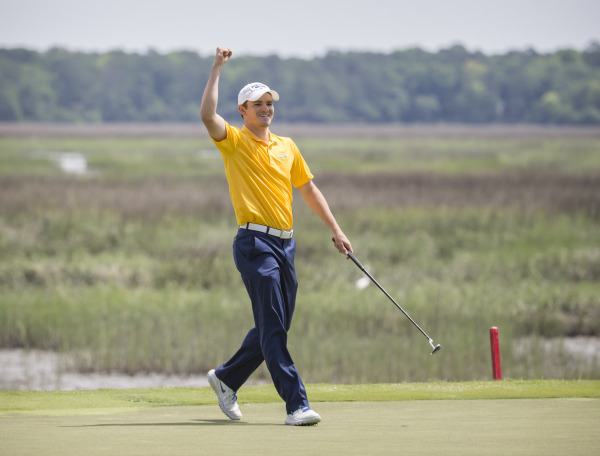 Patrick Sanchez celebrates during his final round at the BIG EAST Championship April 28, 2015, in Okatie, South Carolina.

While most collegiate athletes have the summer off from competition to train and practice, the summer season is in full swing for Marquette’s golfers, who were in action this week at the Wisconsin State Amateur Championship.

Sanchez’s finish was a vast improvement from his 2014 Amateur Championship performance, in which tied for 47th with a 27-over-par. The BIG EAST Player of the Year is coming off a second-place finish at the BIG EAST Championship and an NCAA Regional Round appearance.

Mathew Bachman, a rising senior at Sheboygan Falls High School and verbal commit to Marquette also impressed, and finished tied for second with Sanchez. Bachman shot a 2-under 70 in the final round, including birdies on Nos. 14, 15 and 17.

The 114th Amateur Championship was held at Erin Hills Golf Course in Erin, Marquette’s home course and site of the 2017 U.S. Open Championship. The players were not affiliated with Marquette and represented their home golf clubs, though many of the players were wearing blue and gold on Thursday.

Sanchez will next play the 2015 Western Amateur from  August 3 through 8 in Sugar Grove, Ill., according to Marquette Athletics. Gaugert will play in the 2015 U.S. Amateur Open from August 17 through 23 at Olympia Fields Country Club in Olympia Fields, Ill., which will be broadcast on FOX and FOX Sports 1.

The Golden Eagles will return to Erin Hills October 4 through 6 when they host the Erin Hills Intercollegiate.