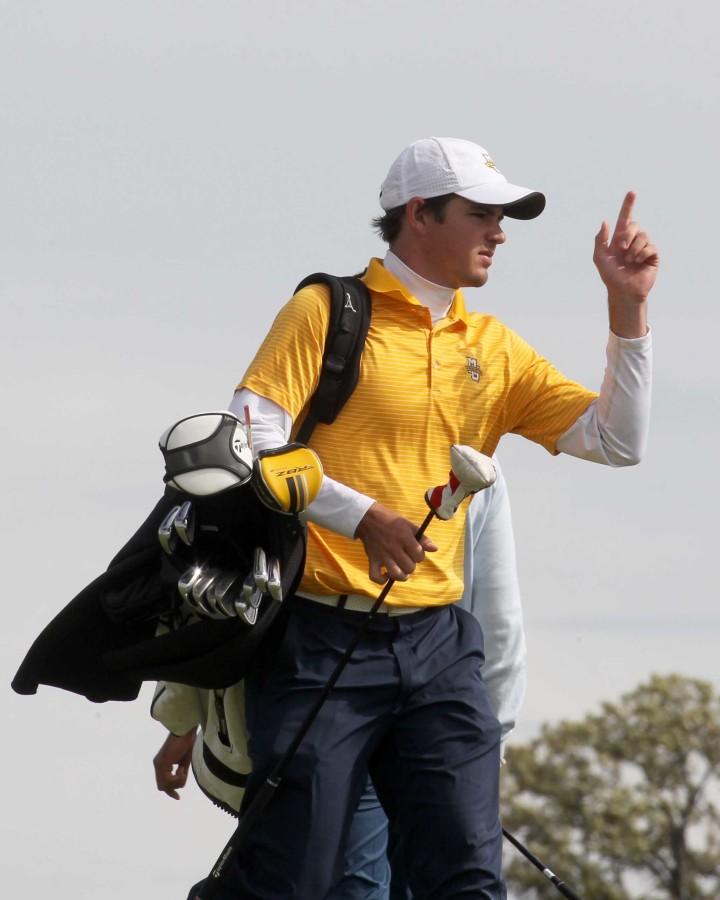 Marquette men’s golf is back on top of the Big East Conference.

The Golden Eagles battled back from an eight-stroke deficit on the final day to win the Big East Championship, Marquette’s first conference title since 2008. Junior Patrick Sanchez shot his best round of the weekend at 3-under par and led the Golden Eagles to a comeback victory against DePaul.

“It feels pretty great to have our hard work pay off and finally be called champions,” Nelson said. “Even though we were behind we knew we had a good chance as long as we kept it close. We were lucky to have the teams ahead of us slip a little and we were able to strike. We stayed patient and just let it come to us.”

Sunday’s opening round kept Marquette within striking distance of day one leader, DePaul. The 16-over par finish left the Golden Eagles five strokes behind the Blue Demons. Sanchez led the way with his opening round 1-over par while senior Brandon Cloete followed suit with a 2-over par. Both golfers were in the top 10 individually after the first round.

Monday’s second round was a chance for Cloete and Sanchez to continue their success. Both players shot between par and 1-over par. The team shot 9-over par, but was able to move into third place, eight strokes behind leader DePaul.

Tuesday’s final round pushed the Golden Eagles into first place with a team total 8-over par. Nelson, junior CJ Swift and freshman Trevor Thomas all shot their best rounds of the weekend. In addition to their best round, Sanchez completed his best under-par round at the perfect time, finishing the tournament at 1-under par and tying for the best three round score overall.

Sanchez said the key was staying calm throughout the final round.

“(I was) playing one shot at a time and being able to handle my nerves under pressure,” Sanchez said. “I knew we had to play really well to have a chance, so it came at the right time.”

Cloete was amazed how close DePaul and Marquette played.

“Its hard to believe that nearly 900 total strokes later, it came down to just two shots,” Cloete said. “But the amount of passion and belief in this team and the support and love from everyone around us, thats what got us through. For these guys to come back from eight strokes in nine holes, man that’s what champions are made of and this team proved they are true champions this weekend.”

Cloete was just happy to win it for coach Steve Bailey. It was Bailey’s first conference tournament victory, coaching in his fifth season with Marquette.

“After all the initial commotion of the final hole and Pat’s putt to win it, Coach Bailey got us all in huddle and just reinforced what we had just done,” Cloete said. “He couldn’t have been more proud of us all in that moment and you could see the sheer joy in his face. This one meant a lot to us all but none more than Coach Bailey. He’s the reason we ended up where we did when it was all said and done and I could not have asked for anyone better. He’s deserved this more than anyone.”

The Golden Eagles qualified for the NCAA Regional Tournament following their Big East Tournament victory. The tournament locations and times will be announced later this week.