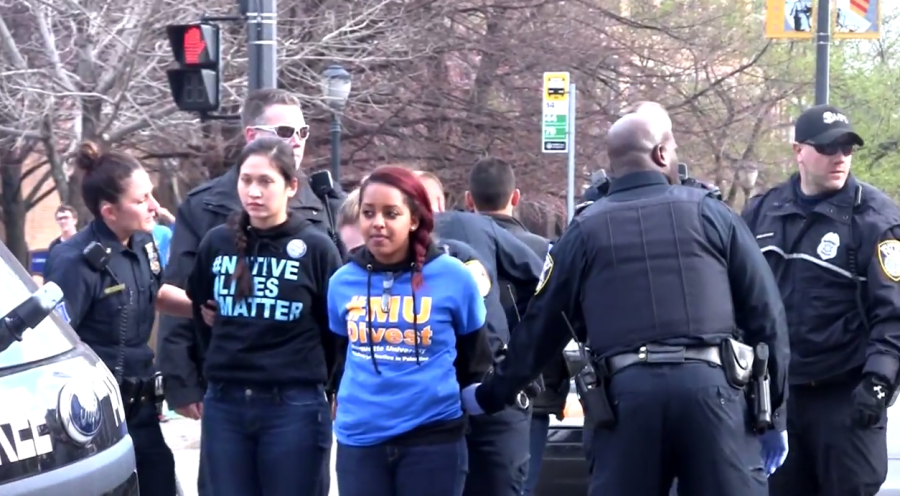 Update on April 28 at 7:45 p.m. One of the arrested student protesters, Victoria Gokee-Rindal, said she and the other arrested students were charged with unlawful assembly. She said they were all bailed out around 4 a.m. on Tuesday after spending time in downtown and county jails.

Update on April 28 at 6:08 p.m. The four Marquette students were arrested for pending misdemeanor charges yesterday and were released from jail after posting bail, according to the Milwaukee Police Department.

Four Marquette students were arrested Monday after their organized march congested the intersection of 16th Street and Wisconsin Avenue, drawing a large crowd of students, faculty, Department of Public Safety and MPD officers.

The Solidarity March, originally devised by the ad hoc Coalition of and for Students of Color, or Coalition SOC, addressed ongoing concerns about Marquette’s handling of controversial issues, and requested divestment from repressive companies, a redesigned Marquette seal and ensured transparency in DPS’s transition to police force, among other demands.

“It’s kind of shocking to see it on our campus,” said Katera Berent, a junior in the College of Communication. “They definitely made some noise.”

The event began at 3:00 p.m. with opening speeches in Westowne Square. Joseph Martinez II spoke briefly along with a number of community leaders from many religious, academic and ethnic backgrounds. Martinez II was arrested along with fellow Coalition SOC members and Marquette students Miguel Sanchez, Victoria Gokee-Rindal and Rebecca Zellelew, whose identities were confirmed by students and protesters.

After marching the length of Wisconsin Avenue while chanting slogans supporting their cause, protesters circled the 16th Street intersection before the four arrested members formed a human chain in its center, effectively bringing the roadway’s traffic to a halt.

Although it was a student-organized protest, a number of Marquette faculty members marched with students to show support and call attention to the racism they say is present in the university’s shadows.

“Often times we hear stories about incidental amounts of racial violence our students are subject to,” said Jodi Melamed, a Marquette associate professor of English and Africana Studies. “For instance the drawing on a chalkboard last week in the library of a sort-of lynched person …. in a space where two black students had been working. And you hear about this all the time.”

With traffic stopped at the intersection, students gathered outside of McCormick Hall and Walgreens to watch police arrive at the scene. Many students watched from McCormick’s windows while officers, protesters and bystanders all remained peaceful.

Vice President of Student Affairs Chris Miller said he approves of the student protesters and sees the conversations sparked as a result to be part of active student development. However, he expressed concern over the methods used by Coalition SOC.

“Students standing out in the middle of the street isn’t safe,” Miller said about the arrests. “(But) we look forward to further conversation.”

Many people saw the protest as progress.

“I think it’s wonderful what they’re doing,” said Sawyer Hill, a sophomore in the College of Arts & Sciences. “It’s wonderful they took the time to do it.”