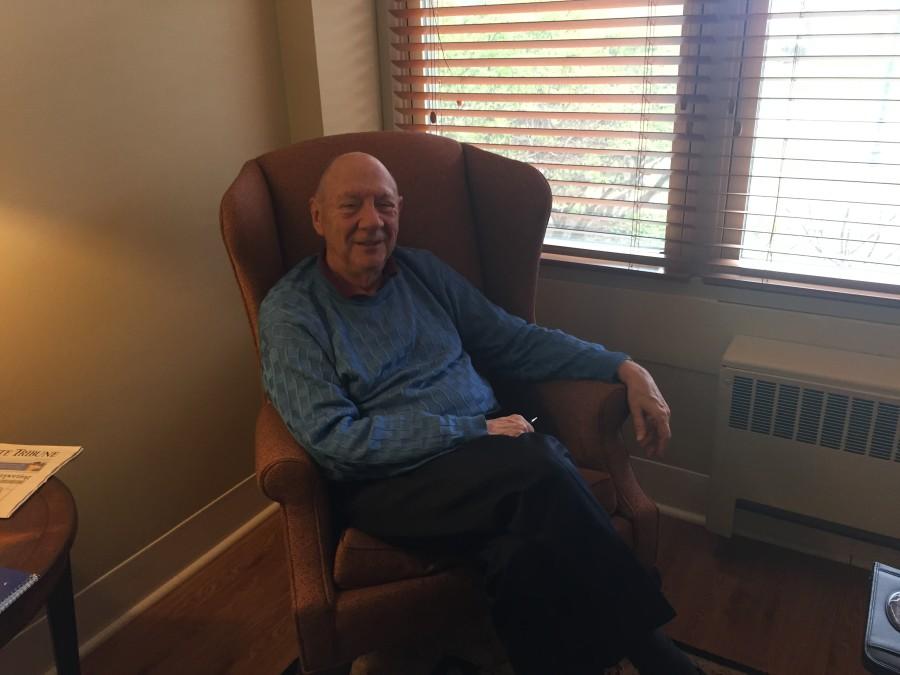 The Marquette Tribune caught up with former university president the Rev. Albert DiUlio to discuss his time at Marquette, what he’s done since leaving the university and his continuing support of Marquette basketball.

During his time as university president, DiUlio created the Campus Town East and West university apartments, changed the mascot from the Warriors to the Golden Eagles and implemented a new parking structure.

“(DiUlio) loved Marquette and he was happy to be at Marquette and have that opportunity to be president,” said Andrew Thon, a Jesuit professor who taught during DiUlio’s presidency. “He came in with the experience of being a president (at Xavier University) and he didn’t have to learn much. He knew Marquette and he knew how to be a president.”

Marquette Tribune: What did serving as Marquette’s president teach you?

DiUlio: It taught me a certain level of humility and a continuing great pride in the institution. I also learned the fact, bluntly, that you don’t please all the people all the time. You have to do what you think is best. You have lots of people that give you advice and they all have a voice and it is important to listen to all of the voices but the trouble is, you can’t follow what every voice says. One of the enormous positives of a university campus is the vibrancy, the enormous variety of interests and thoughts and so on. To me, that was very enlivening. Marquette was a good place to be.

MT: You were here when the mascot changed from the Warriors to the Golden Eagles. What was this transition like?

DiUlio: It was a challenging change. The constant issue was to be respectful of the Native Americans. So the people came from this committee and said we can’t do this very well by being Warriors, so can we change the mascot? Well, I mean if you feel that’s necessary, we’ll see what we can do with that. And then we went through a process of inviting people to propose new mascots and we voted and it came out to be Golden Eagles.

MT: Did this change create any backlash?

DiUlio: Not so much to the name Golden Eagles but to the dropping of Warriors. From my own classmates, people were extraordinarily displeased. But that’s OK. You know, my thing was, as part of a Jesuit life and part of a religious life, it was important we were respectful of people and from my point of view this was a point of being very respectful of Native Americans and being very careful of how we represented ourselves.

MT: What are your thoughts on University President Michael Lovell?

DiUlio: He’s been terrific. I think he brings a new vision and new life and we clearly, with a lay president, are moving into a different era. Just this year, Marquette went to a lay president, as did St. Louis University.

MT: What are the biggest challenges facing Jesuit higher education?

DiUlio: One of the biggest challenges is continuing the charism of Jesuit education and its style and what you would call the Ignatian vision of higher education in particular. The problem with that is there are fewer and fewer Jesuits so you need to inform and bring along a larger non-Jesuit program. When you are in some of the schools that have far fewer Jesuits, passing on that charism and continuing that charism is a great challenge.

Another challenge is the financing of education. The financing of Catholic higher education in general, Jesuit education is no different, is an ongoing challenge to the work we do. The attempt we continue to make to be able to care for the disadvantaged, the poor, whoever, takes an enormous amount of money. It puts a great strain on our resources and fundraising really takes care of a lot of that. Otherwise you don’t balance your budget, and that’s not a very good thing for higher education.

MT: Any proposed solutions for these problems?

DiUlio: I think we can do a lot for maintaining and continuing the education of Jesuit charism among faculty and staff and trustees and among students. Fixing the financial issues is much harder in many ways. It’s a matter of really wanting to go out there and selling what we continue to offer to a large community of donors who want to continue to support this type of work.

MT: You left Marquette in 1996. What have you done since then?

DiUlio: I wound up teaching at Santa Clara (University). Then in 1999 I went to Africa and founded the Catholic University of Ethiopia. When I came back I ran the Catholic schools of the Los Angeles Archdiocese and was president of the 278 Catholic schools there. And then I went to the Jesuit conference in Washington D.C. where I was treasurer. The last three years, prior to this one, as I say, I was the Vatican Observatory Foundation and I say that because I was the only person there. I was a fundraiser for them. Since then, I became treasurer of the Chicago, Detroit and Wisconsin Jesuit provinces and that’s where I am now. I’ve done a lot of things, and all of them have been interesting and exciting in various ways. From living in Ethiopia to living in Tucson to living in Los Angeles, they’re all different and I enjoyed them all.

MT: You mentioned being treasurer of the midwestern Jesuit provinces. What is going on with these provinces?

DiUlio: In the United States we had 10 Jesuit provinces. We are going to four. On June 30, 2017 Wisconsin is combining with Chicago and Detroit. This is due to the decreasing number of Jesuits. There were a lot of us for a while and now our numbers are down and we are not a young group anymore. We have combined and are combining and this process will be finished about 2020.

MT: Can you describe the experience of being Marquette’s president?

DiUlio: It was wonderful. It really was. I was here for six years and I had an extraordinarily fine experience. It was nice coming back to my alma mater to share in its life and to make some changes and oversee. My predecessor (the Rev. John Raynor) had been here for 25 years so there were some things we were doing — the neighborhood had to be worked on and that was probably our biggest task. We had to really be careful with and respectful of the neighborhood but also making sure it was a good and safe place for students. So we built the first part of Campus Town then and it’s been very successful. It’s hard to believe its been 20 years since its been up but yes, its done well. Things that needed to be done got done and it was a terrific experience. Having had Raynor as my predecessor, he did an enormously good job and put a lot of things in place and we built on that. And I say that just as (former university president the Rev. Robert) Wild built on what happened before his time.

MT: Do you have any future plans?

DiUlio: No future plans. Part of it is, I’ve never had anything else in mind in the sense that things have come up periodically that I’ve heard about. If that’s what the society wants, then I do these things and make what I can out of any new position. I go do a job and then I go. For me, it’s just good to go and do your thing and then more onto the next. That’s just my philosophy and part of it is, I have a lot to do and not a lot of time for dwelling on the past.

MT: As a Marquette alum, have you kept up with Marquette basketball?