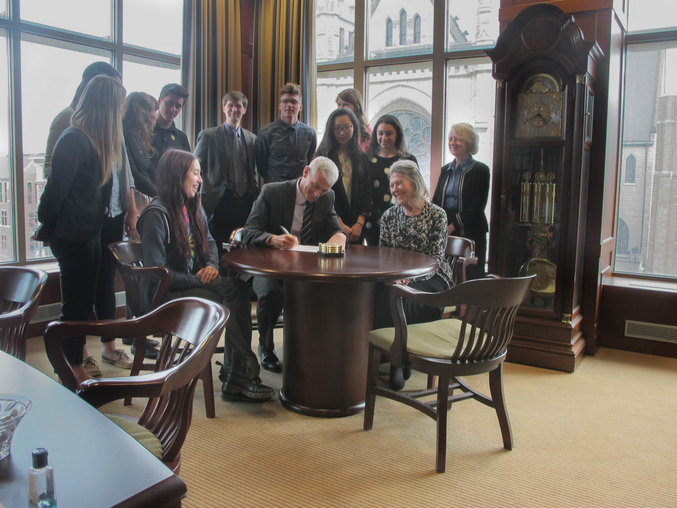 In recognition of Earth Day, University President Michael Lovell signed the St. Francis Pledge Wednesday to increase sustainability on Marquette’s campus and in the surrounding community.

The signature is the culmination of three years of work by Students for an Environmentally Active Campus and other Marquette community members. The university now joins the ranks of many other Catholic institutions and organizations who have signed the pledge.

“I think it’s exciting,” Lovell said. “It’s an exciting day and to sign it on Earth Day is very symbolic.”

The pledge contains five pillars: pray, learn, access, act and advocate. Each plays a different role in the signer’s duty to be a steward of the Earth and create a more sustainable future while advocating for the poor, who are most impacted by climate change.

The resignation of former University President the Rev. Scott Pilarz in September 2013 caused a delay in the signing. Still, SEAC members, including faculty adviser Jame Schaefer, said it was a necessary step for Marquette’s administration.

“We decided this is an important initiative for Marquette to take,” Schaefer said. “Especially to join other Jesuit and Catholic colleges and universities that have already signed the St. Francis Pledge.”

While the signing of the pledge may be a new beginning for creating an environmentally active campus, SEAC members said there is still a lot of work to be done to educate and motivate the student body.

“The big issue is to not just let that pledge sit,” Schaefer said. “We don’t just want a document that is signed. We want us, as a university – faculty, students, staff – to actually say how we think we should be making that pledge on our own.”

Lovell’s signature comes before the release of the papal Ecology Encyclical, in which Pope Francis will outline the need for the Catholic Church to take care of the environment. As Catholic communities are increasingly discussing their role in environmental issues, SEAC President Triniti Micek maintained that signing the pledge was just the first step.

“We’re actually working on a plan … to take the idea of the St. Francis Pledge, but specific to Marquette, in the Milwaukee community,” Micek said.

The search for a new Officer of Sustainability is at the forefront of Marquette’s sustainability efforts. Next year’s Mission Week will also be sustainability themed to encourage discussion and work toward making the pledge unique to the university.

Schaefer said that, while there are also initiatives in the university’s master plan, they do not focus enough on the entirety of the sustainability issue.

“Right now, that idea of sustainability has been focused on the facilities and not on academics,” Schaefer said. “There are models for how you can have a sustainability officer who deals with the whole thing, all of Marquette. If you read the master plan, you won’t read anything about the full dimensions of the St. Francis Pledge.”

Following Lovell’s signature, the group took a moment to discuss how the pledge will be lived out on campus. Lovell and Schaefer suggested the possibility of running a campus assessment comparable to the one run in 1998 by the Rev. Albert Fritsch, which Shaefer said wasn’t released until SEAC members asked for it around 2003.