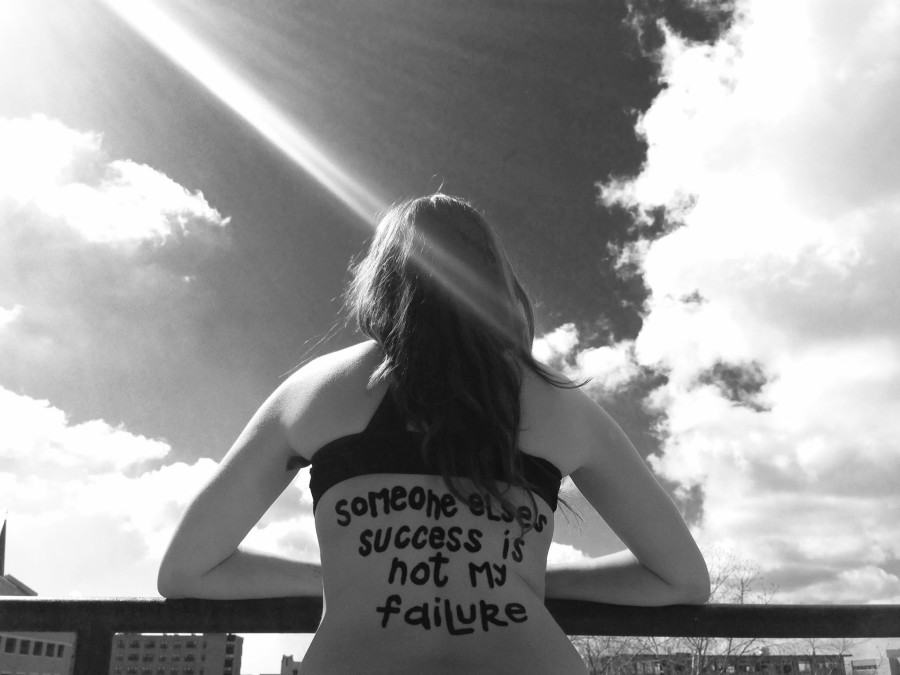 Junior Claire Revord asks her models to choose a personal message, which she then paints on their bodies.

As a junior in the College of Education at Marquette, Claire Revord wanted something more. She found herself sitting in English class one day and was bored. Doodles and drawings lined her papers. Picked out from these writings, is a phrase: truth be told. Revord remembers thinking of a photography project in her mind where people could share truths. She felt an intense desire to start on it right away.

Her project, “Truth Be Told” features Marquette students with secrets painted across their bodies. Revord quickly realized many people she knew that would be interested. It started as a doodle but grew into much more.

“I was able to see how willing people are to talk,” Revord said. “I think that sometimes we are afraid to ask hard questions but I realized that people will tell you if given the opportunity.”

Revord’s project caught the attention of students on campus, some of which shared their experiences.

Scott Friedrichs, a junior in the College of Engineering, had the words “I define myself” painted on his back. Choosing a message like this meant something deeper to Scott.

“Things have been changing my life to where my family and others try and make up who I am for me rather than letting me be my own person,” Friedrichs said. “It made it feel as though a weight has been lifted off my shoulders because even though the people who are doing this to me may not have seen it, it still felt good to let it out and tell someone.”

Friedrichs went on to explain his participation in this project and its importance to a college campus like Marquette.

“I thought this was a great way to express myself, and a great way to just be free, for no one to judge me,” Friedrichs said. “I think this project is hugely important because so many of us keep things locked up inside of us hoping things will all work out. We don’t tell people what really is going on with us- we wear masks and pretend everything is okay when it really isn’t This is one way anyone can freely express themselves without being criticized.”

Another student impacted by Revord’s work is Kelly Regan, a freshman in the College of Arts & Sciences. Regan had the words “I’ve never grown up” painted across her chest and stomach.

Regan’s intrigue for the project came from seeing the involvement from other people.

“I think what caught my eye was how confident people appeared who had taken these pictures with Claire,” Regan said. “I really loved how proud they were to share their secrets, even if it was only that they were afraid of spiders or something. It’s inspiring.”

Regan did not have to dig deep to find what message to portray in her phrase.

“I instantly knew what I wanted to share with Marquette: I have a slightly large obsession with Disney,” Regan said. “Most people know how much I love Ariel, but a lot of people don’t know that I really hate growing up. I think I latched on to Ariel because I wanted a role model to teach me that it’s okay to leave home as long as you’re with people you love and you’re following your dream. That’s why I chose that I’ve never grown up, because I had to admit it in order to start growing up.”

The joy that is exuded through Regan’s photo is effortless. Her message encompasses her passion and where her life will go.

“This project is so important because it inspires people,” Regan said. “They say a spark lights a fire, and I think the first three models for this were the spark. It shows people that it’s okay to have some fear or some past trauma. It tells everyone that we are stronger than our insecurities. I think Claire’s project helps people move on and helps others feel better about themselves.”

Alek Druck, a junior in the College of Arts & Sciences,  shared the personal battle he faces and how the words he chose exemplified that. Druck had the words “Sometimes I forget to love” painted across his arms.

“The message I had drawn on me was something that I felt that I needed to work on personally,” Druck said. “I don’t really know why, but Claire made me feel really comfortable in sharing my message with her. It was really fun and relaxing to have Claire paint the message on me, and it was cool to see how creative she was. I feel like sometimes I don’t get to experience that kind of creativity when I’m so focused on school.”

Druck also discussed how the project plays an important role for Marquette.

“It looked meaningful in the sense that it attempted to unify the campus through honesty and openness, which are things I value and find important,” Druck said. “The purpose of this project shows its importance. It seemed to show what people are struggling with, and like I mentioned before, it creates a sense of social unity as people see others struggling with or dealing with the similar things. I thought it was truly inspirational, and the fact that she created it by herself makes it that much more amazing.”

Many students focused on aspects of their lives that needed to be changed or worked on. Haley O’Connell, a sophomore in the College of Communication, took an entirely different look on this project. O’Connell had the words “I love myself” painted on her chest.

“I knew that I wanted to choose a positive message,” O’Connell said. “I felt good sharing it with others because I hoped that it would inspire others to love themselves. I honestly think loving yourself and knowing that you have value is the most important thing for young adults around our age.”

Having such a powerful message proved to O’Connell how strong of a project “Truth Be Told” was to her personally, and to the Marquette community.

“I was inspired by people’s bravery in telling their stories and wanted to include my own in this amazing project,” O’Connell said. “I think it’s important because it gives the participants a sort of catharsis. It feels good for them to tell their stories or feelings and have them be heard and valued.”

Lauren Shipman, a junior in the College of Health Sciences, explained how past photographs spurred her interest in participating. Shipman had the words “Hope is the only thing stronger than fear” on her back.

“I love photography and think that a lot of people on campus have beautiful words to share,” Shipman said. “A photo in particular that caught my attention read, ‘I let people walk all over me.’ I instantly felt a connection with her because I do the same thing as well as respect for her being so real, it inspired me to get in touch with Claire to be a part of her project.”

This connection happens with many students as previous photographs Revord created gave them inspiration to create a message of their own.

“I think that people often get bogged down and defeated by fear,” Shipman said. “In those times it’s hard to remain positive but if sharing those words helped bring light to even one person to remain onto hope even when nothing is going right, then I’m glad I got the courage to be a part of it.”

Shipman explained what this experience could mean to anyone who is a part of it.

“This project gives people an opportunity to connect with other students across campus with something as simple as a picture through being genuinely vulnerable and honest,” Shipman said. “It puts into perspective the character and personalities of all the people you just happen to pass by on the way to class making them more than just another face in the crowd.”

These five individuals are just a sample of Marquette students who have participated in the project thus far.

Revord shared how she sees this project’s progress and what it means to the campus.

“You could be passing these people on the way to class and never know that they have gone through the exact same thing,” Revord said. “This is an ongoing thing. This isn’t for an assignment. I just want to continue this for as long as possible while I’m at Marquette until the fall of 2017. I think it is impactful and cool to hear everyone’s stories.”