Secrets of a hidden tomb in the Joan of Arc Chapel 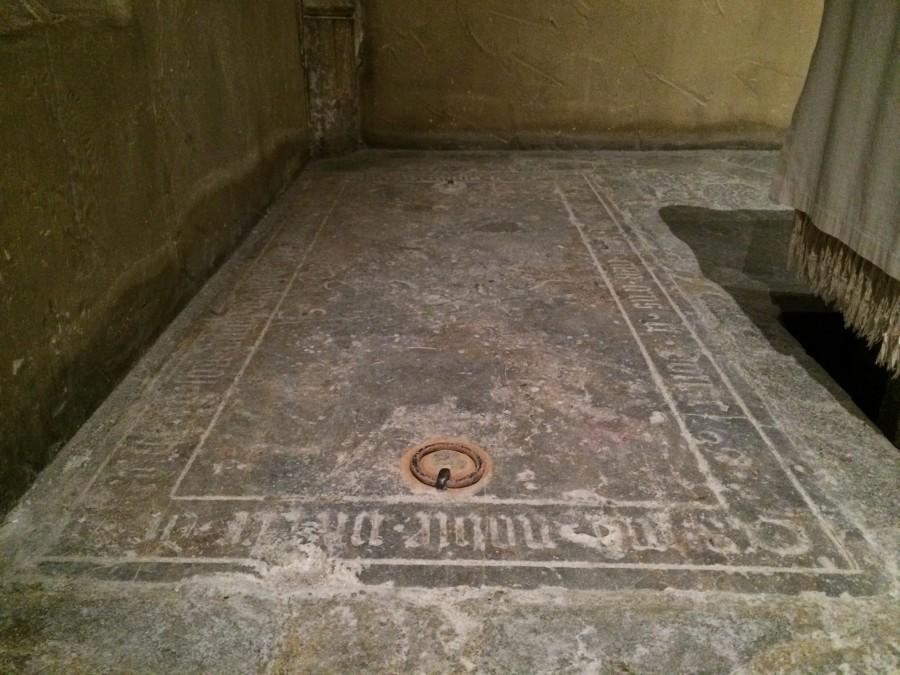 Tuesday night Mass in the Joan of Arc Chapel is as packed as usual, with chairs removed to accommodate the large crowd. Students sit on the floor and wooden benches that line the walls. Little to their knowledge, a tomb cover lies beneath them.

In the back corner beside the altar, students sit atop a stone door on the floor. The door is cemented shut and was once an entrance, but not to a basement. Rather, it was an entrance to the tomb of Chevalier de Sautereau, who likely died in the 15th century.

“I knew it was an ancient, historic place but I never expected a tomb to be here,” said Lexi Dossey, a senior in the College of Business Administration who has attended mass at Joan of Arc since her freshman year. “I’d be more freaked out if there were a body down there just because graveyards freak me out, but it’s empty so I’m cool with it.”

Having a tomb under a chapel is irregular in this day and age but was very common in the 15th century.

“It is pretty typical of European churches to have people of local importance buried there, especially in a family chapel,” said Julie Baumann, a Joan of Arc Chapel docent.

Joan of Arc Chapel was built in the 14th century in Chasse, France. It was built as an extension to an unknown family’s house. The family’s son was de Sautereau, the Chatelain of Chasse who died in battle and was buried in the chapel. At that time it was named Chapelle de St. Martin de Sayssuel.

De Sautereau’s family’s coat of arms remains painted on the chapel walls. They used to be on every corner of the chapel, but the paint has worn away.

The chapel was used for centuries until it was abandoned after the French Revolution. It then fell to ruin but was later discovered by architect Jacques Couëlle, who transferred it to the residence of Gertrude Gavin in Brookeville, New York in 1927. Chevalier de Sautereau’s remains stayed in France but the tomb’s cover remained in the chapel.

When Gavin passed away, the chapel was donated to Marquette by the new owners. It was taken apart and shipped stone by stone to Milwaukee. It is the oldest building in Wisconsin and has become an attraction of tourists of the city and Marquette.

“Since it has been (in Milwaukee), we have tours coming through and that kind of wears (the chapel) down,” Baumann said.

Many who visit are drawn to the corner where the tomb cover lies because the Joan of Arc stone sits above it. The stone is rumored to have been kissed by Joan of Arc when she prayed there, and it was added to the chapel when it was in New York. It is always colder than the stones around it.

Not only is the story of the knight who once inhabited the tomb a mystery, but the writing on the tomb cover still puzzles the Joan of Arc chapel staff, who have never been able to identify the language on it.

“We haven’t been able to decipher very well what it says,” Baumann said about the tomb cover.

A faculty member from the language department once attempted to translate it. She traced over the letters but never returned with results.

“We never saw her again,” Baumann said. “I have not been able to identify it and I don’t know anyone here who has.”

So the tomb cover sits in the chapel and hundreds of people unknowingly walk over it each year. Though a body no longer lies there, the idea still gives students and tour groups the heebie-jeebies but not everyone.

“A lot of families on tours are creeped out by it,” said Thomas Wargo, a senior in the College of Nursing and Marquette tour guide. “I’m a nursing major so it’s kind of natural to me.”