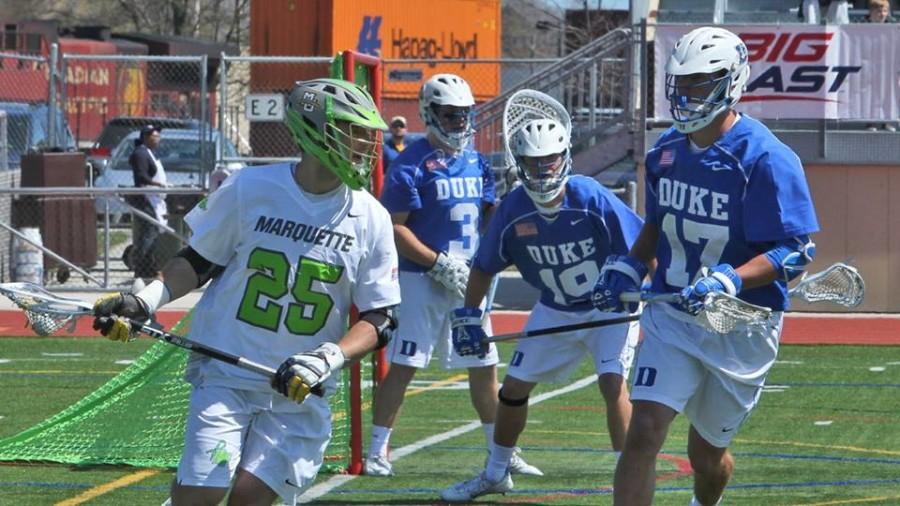 The No. 16/17 Marquette men’s lacrosse team has had a historic season, entering the national conversation.

The team has come a long way, but still has a bit to go before defeating the best of the best. The Golden Eagles weren’t able to play spoiler this weekend, losing 15-8 to No. 6/6 Duke.

The Blue Devils scored two goals early, but Marquette tied things back up with goals from junior attackman Conor Gately and redshirt junior midfielder Kyle Whitlow. Duke pulled away in the second half of the first quarter when the Blue Devils went on a five-goal run.

“We knew they were going to make a run,” coach Joe Amplo said. “Unfortunately it came in the middle of the first quarter. They’re a good team. They make plays. They’re poised. They’re confident. We couldn’t manage that run long enough to keep it close.”

Gately and sophomore midfielder Ryan McNamara were the only Golden Eagles with more than one goal, each scoring two. Sophomore goalie Jimmy Danaher made 14 saves in the loss.

When it came to scoring opportunities, Marquette was not blown out of the water. The Golden Eagles had only three shots less than Duke, but weren’t able to capitalize with the efficiency their top-10 ranked opponent did.

“(The Blue Devils) did what they wanted to do,” Amplo said. “We couldn’t defend them. We couldn’t play one-on-one defense early. Transition they beat us. Our midfield did not do a great job playing transition defense. At time it was easy for (Duke).”

“Offensively on our part, we probably could have finished a lot more opportunities than we did,” junior midfielder Blaine Fleming said. “I know I missed a few. A bunch of our starters missed here and there. If we had landed a few more, it would have been a different game.”

“We just didn’t can our shots,” McNamara said. “We got all these opportunities, we’ve got to start executing our shots. A lot of little mistakes is a difference between being a top ten team and a 15th ranked team.”

Following Duke’s early run, the Golden Eagles did manage to hang with Duke the rest of the way. The two teams had the same amount of goals in both the second and third quarters, but Duke extended its lead further in the final minutes. The closest Marquette came in the second half was a four-goal deficit early in the fourth quarter, but Duke responded with the final three goals of the afternoon.

It was a lively atmosphere at Hart Park, filled with cheering fans and youth lacrosse players from the surrounding area. The 4,575 fans in attendance were a record for Marquette.

The Golden Eagles donned green uniforms and shooting strings in honor of the HEADStrong Foundation, founded by Nick Colleluori, who played for Amplo and Duke coach John Danowski at Hofstra. The foundation raises funds for cancer research and treatment.

“At the end of the day, the best part of this day for both teams is the fact that we raised a lot of awareness for a great cause,” Amplo said. “That’s really what matters most.”

“It was amazing,” McNamara said. “All the new gear, all the fans, it was so much fun to play with. Too bad we just couldn’t come up with a win.”

Marquette will play its final game of the regular season Saturday when it hosts No. 5/5 Denver. The game will be aired live on CBS Sports Network.