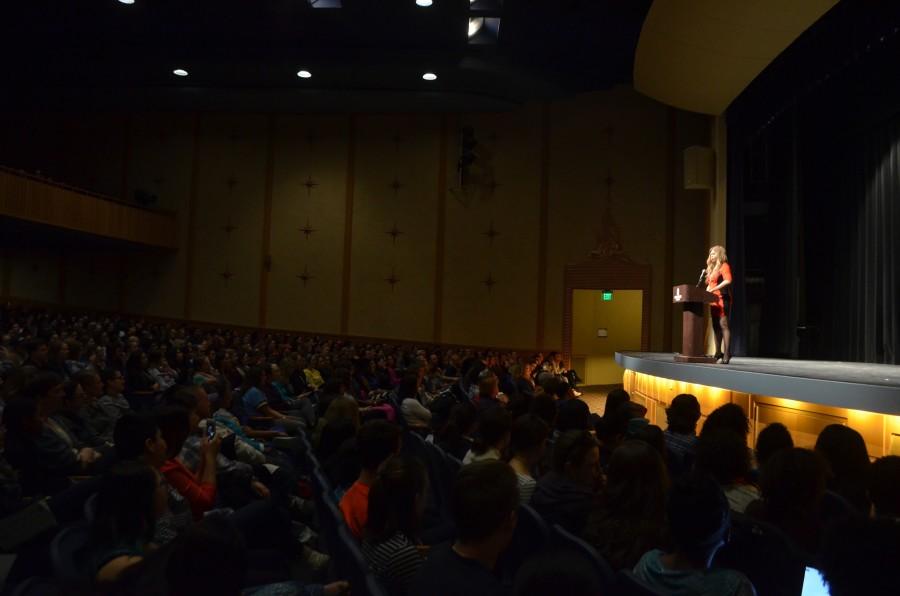 The Varsity Theatre was packed Thursday with students hearing from Laverne Cox, an Emmy-nominated actress and activist.

“I stand before you this evening a proud, African-American transgender woman,” Cox said to a loud round of applause. “From a working-class background, raised by a single mother, I stand before you an actress, a sister and a daughter. I think it’s important to name the various intersecting components of my multiple identities because I am not just one thing. And neither are you.” 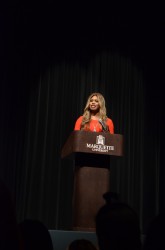 Cox gave her talk, titled “Ain’t I A Woman: My Journey to Womanhood,” as a part of Marquette Student Government’s Speaker Series. She is best-known for playing Sophia Burset on Orange is the New Black. The same day she visited Marquette, Cox was named one of TIME Magazine’s 100 most influential people of 2015.

The theatre was full with students, some from the University of Wisconsin-Milwaukee and Alverno College, who welcomed Cox with a standing ovation. They leaned in and listened intently as Cox told her life story and gave advice on how to start conversations about seeing identity from an intersectional perspective.

The title of Cox’s speech is a reference to the speech Sojourner Truth gave at the 1851 Women’s Convention. Throughout the talk, Cox referenced many writers and theorists including bell hooks, Judith Butler and Brene Brown.

Laquan McMahan, a sophomore in the College of Business Administration, described Cox’s speech as empowering.

“To actually get a woman who is transgender to come here is a step towards awareness and it’s important,” McMahan said.

Cox grew up in Mobile, Ala. and experienced constant bullying as a kid because she was a boy expressing herself in traditionally feminine ways.

“They said I acted like a girl, whatever that means,” Cox said. “We all know girls act in all sorts of ways.”

Cox stressed the importance of creating safe spaces where the gender binary and gender policing don’t exist. As an example, she suggested Marquette create gender-neutral bathrooms.

Dance was Cox’s entry point into artistic expression and a refuge from the bullying. She mimicked choreography she saw on TV before her mom enrolled her in dance classes.

“Where I did feel safe was in my imagination,” Cox said. “I believe if we can find something in this world that we are truly passionate about, that it can be life-saving.”

Cox went to therapy in third grade at the request of her teacher. Her mother wanted her to act in traditionally masculine ways but refused to allow the testosterone shots that the therapist recommended.

Although Cox does not ascribe to an organized religion, she describes herself as a spiritual person who prays and meditates. She attended church as a child and saw it as a performance opportunity.

“I loved to perform as a kid,” Cox said. “I was an usher in church, I sang in the choir and I was always one of those kids getting up and making speeches. Apparently not much has changed.”

Cox told the audience to ask others what pronouns they chose to go by. That act helps avoid mis-gendering people, which Cox said is an act of violence.

“Pronouns matter,” Cox said to a loud round of applause.

“To me, I never realized how important using the correct pronoun is,” said Cori Garner, a junior in the College of Arts & Sciences. “I know that as a human I’ve slipped up a little bit and I’ve always wanted to know how to address that problem.” 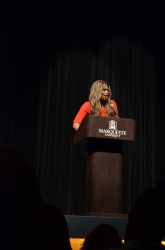 Cox spoke with confidence and vibrant gestures, even when talking about the difficult parts of her life, including the death of her grandmother when she was going through puberty. That, coupled with realizing she was attracted exclusively to boys, led Cox to attempt suicide by taking a bottle of pills.

“I remember saying to myself, when I survived, that I would do everything that I could to push down those feelings I was having about other boys,” Cox said.

Cox kept that mentality until she went to New York City for her last years of college. While there, she went to clubs and met transgender women. She said if she hadn’t met them, she probably wouldn’t have started her medical transition 16 years ago.

“If we have misconceptions about people who are different from us, I believe if we just get to know those people as people, all those misconceptions will melt away,” Cox said.

Getting her mother to accept her transition was difficult but Cox said her mother fully accepts it now. When someone uses the wrong pronoun when referring to Cox, she said her mother will correct them.

After the speech, Cox answered questions and said that someone in a similar position to hers should do everything they can to get an education.