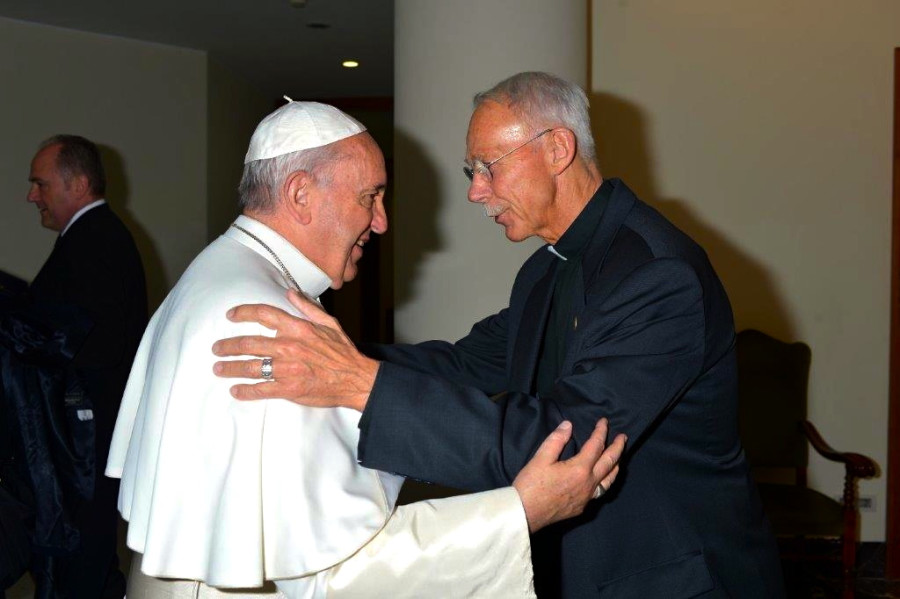 The Rev. John Schlegel, pastor of the Church of the Gesu, crossed something off his bucket list after traveling to the Vatican last week to celebrate Mass with Pope Francis.

Schlegel was diagnosed with inoperable cancer in February.

Schlegel was one of 12 priests invited to celebrate Mass with Pope Francis last Thursday morning. He arranged the meeting through a connection with a Marquette alumnus who is friends with one of the cardinals.

Though the service may have been simple, it is no ordinary thing to attend an exclusive Mass with the pope in his private chapel. Including staff, Swiss guards, and the one guest each invited person was allowed to bring, there were roughly 40 people in attendance. The select group did not have to wait in any lines or navigate through any crowds like the average tourist.

“He makes the first move,” Schlegel said. “He grabs your hand, and in my case he grabbed my hand then put his arms around my shoulders. It was really cute.”

Schlegel spoke to the pope for maybe five minutes in both English and Spanish and then they took photos together, including a couple selfies.

“There is nothing stuffy or formal about him, and he has a great smile, a very ready smile.”

As a dedicated Jesuit, Schlegel said it felt important to pay homage to the pope.

“I just wanted to touch base with the boss and say good luck and thank you.”

Though Schlegel is continuing to seize opportunities and has been traveling a great deal, mostly around the country to visit family members, he admitted that he feels his health deteriorating in increments, but he continues to preserve his peaceful attitude.

Until that something happens, he remains dedicated to making the most of each day and celebrating the remainder of his life, keeping his sense of humor intact all along the way. He laughed as he described the invitation he just received to a party in Omaha: a wake party for himself.

There are expected to be hundreds of friends attending the gathering.

“I think it’s good for the corpse to have a drink and listen to the eulogies before so it can tell them what not to say,” Schlegel joked, but recognized on a more serious note that he has no idea what could happen in the three weeks before the party.

In the meantime, Schlegel is walking through life alongside those he loves, encouraging them not to get too sentimental or sad.

“I’m at the point when I’m open to what’s going to happen,” he said. “After all, life is too short, no pun intended. Gallows humor!”

Schlegel will celebrate the 11:30 a.m. Holy Thursday and Easter Sunday Masses at the Church of the Gesu this week.