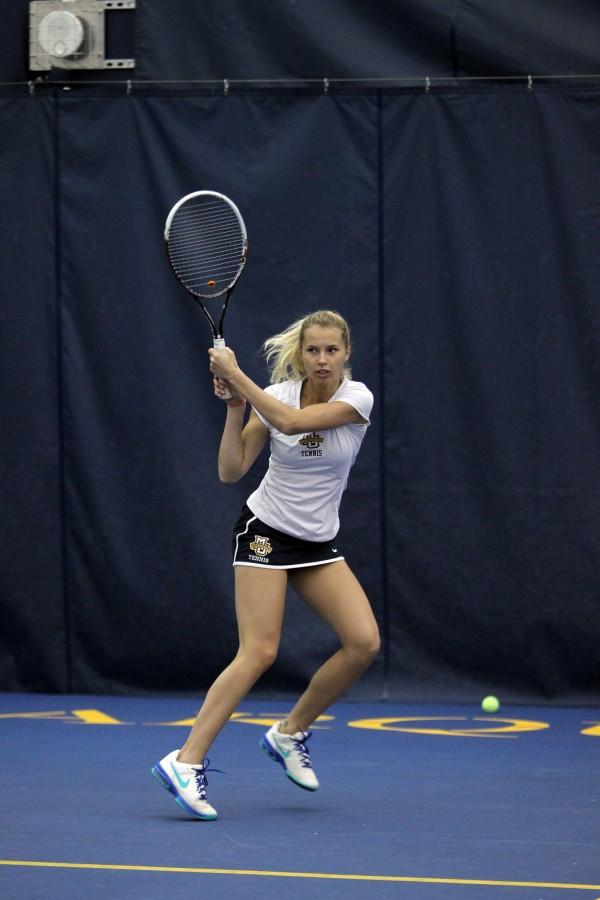 The Marquette women’s tennis team continues its five-game road trip with stops at Butler and Notre Dame, with the Golden Eagles searching for its first conference win of the season.

Marquette had its first opportunity to snag a conference win with its first game on the road trip against Xavier. The Golden Eagles struggled to build momentum against the Musketeers, and lost 5-2 in. The next day, Marquette headed to former conference foe Cincinnati and gave the Bearcats a run for their money. Cincinnati bent but did not break, withstanding a late Marquette push to eventually take the match 4-3.

With two straight losses and five in its last six, the team sets its sights on the pair of Indiana teams in Butler and Notre Dame.

Saturday’s match against Butler should prove to be the easier of the matches for the weekend, as the Bulldogs are just 4-13 this season. Butler and Marquette faced three similar opponents in Indiana, Illinois State and Cincinnati. Marquette swept Illinois State 7-0, but fell to Indiana 6-1. Butler lost to all three schools, falling to Indiana 7-0, Cincinnati 6-1 and Illinois State 5-2.

Facing an inferior team in Butler should give the Golden Eagles a momentum boost. It gives the chance for pairings to continue to build chemistry and possibly switch around rankings, giving less experienced players the chance to play expanded roles. The last time the two teams met, Marquette won 5-2 in the Big East tournament, and it shouldn’t be out of the question to expect a similar outcome. Having a quick, victorious match would go a long way before playing Notre Dame, a much more skilled opponent.

Notre Dame heads into its match against Marquette 10-6, but is ranked No. 36 in the nation and features the No. 20 doubles pair of Quinn Gleason and Monica Robinson. While losing the doubles point isn’t always a major impact on the match, but a drubbing early in the match could derail any momentum Marquette carries into the match.

The Fighting Irish and Golden Eagles played two similar opponents in Indiana and Illinois. Notre Dame fell to Indiana 4-3, but beat Illinois 5-2. Marquette lost to Illinois 5-2. Notre Dame will play the Golden Eagles tough but could get caught playing down to its lesser opponent. Marquette will need to play its best match of the season and will need a little extra luck in order to pull out a win against the Fighting Irish.

Marquette plays its first match at 10 a.m. Saturday against Butler, then travels to Notre Dame for its match against the Fighting Irish at 11 a.m. Sunday.