Yes, the basement of Humphrey used to have a morgue 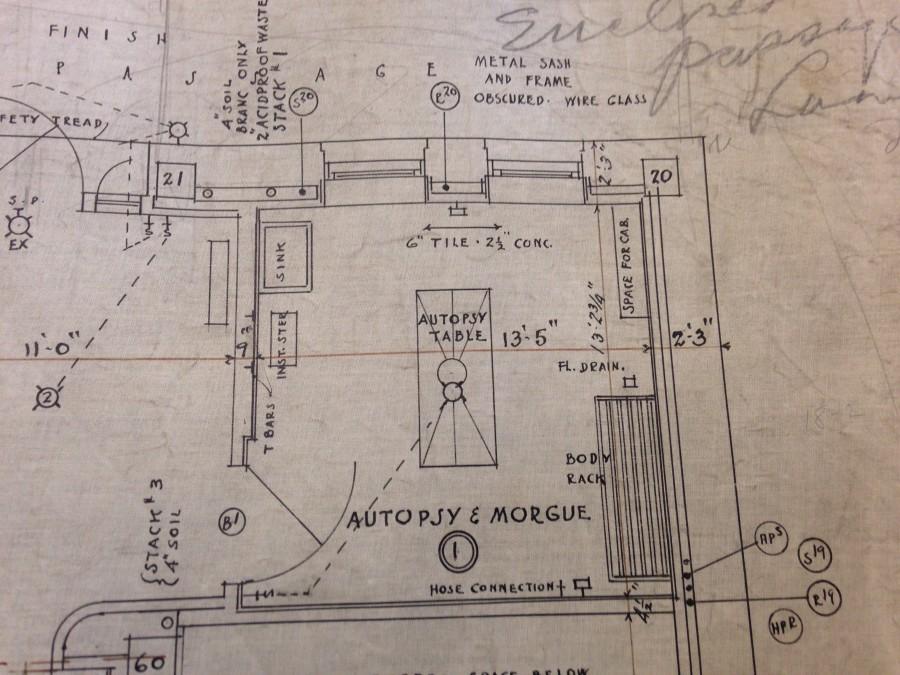 Blue print records of Humphrey's basement detail what the morgue looks like. Photo courtesy of the Wisconsin Architectural Archives of the Milwaukee Public Library.

Now that Humphrey Hall is transitioning to an underclassmen dorm for next fall, it’s time to address some rumors about the building, which formerly was the Milwaukee Children’s Hospital.

It’s easy to guess that a number of ghost stories about the building’s basement would emerge, mostly about ghost children and hospital equipment.

While requests to see the basement were denied, archived building blueprints provided the most insight.

An architect with the initials J.H.R. drew the plans for the Milwaukee Children’s Hospital basement Dec. 4, 1922. These plans include four dining rooms, pantries, kitchens, and tucked away in the corner, a morgue and autopsy room.

This room contained an autopsy table, sink, cabinets and — of course — “body racks.”

The building served as a hospital until 1988, when it was renovated for student housing. The basement of Humphrey is now the location of Sodexo’s bakery.

Humphrey is now university-owned apartments for upperclassmen and graduate students. Next year it will be an underclassmen dorm, housing 395 underclassmen, including 212 sophomores

Tim Fair, a freshman in the College of Engineering, secured a fifth-floor Humphrey quad for next year. One of his roommates had an early sign-up time, which allowed them more options than most students.

“Our floor (in Carpenter) is really close, so we all wanted to divide into quads in Humphrey,” Fair said. “When we signed up at 4:15 there was only one room taken on the fifth floor, so we went in and locked our room. By 4:30, everything was gone. In only one 15 minute slot, everything was taken.”

Janz confirmed Humphrey was the first of the five sophomore dorms to be filled.

“We’ll leave the cabinets in, but appliances will be removed,” Janz said. “The living room will be filled with desks and other pieces of furniture that won’t fit in the bedroom.”

Of course, there’s no way to verify the building’s ghost stories. Fair said he doesn’t feel too concerned about living in Humphrey, although he plans on informing his roommates of the haunted rumors.

“I believe in paranormal entities, but not ghosts so much,” Fair said. “But I’m not at all concerned.”

Chris Smith, a senior in the College of Arts & Sciences, has lived in Humphrey for two years. He claims to have experience with the supernatural during his residence there.

“There’s a rumor about a girl on the tricycle in the basement, and there’s a girl on the fifth floor running around,” Smith said.

Smith said before living in Humphrey, he had always believed in the supernatural, but living in Humphrey has given him several “first-hand experiences.” He shared stories of seeing hands on his shower curtain and hearing long, loud screams.

Still, Smith said students who were lucky enough to receive a spot in Humphrey should enjoy their time there.