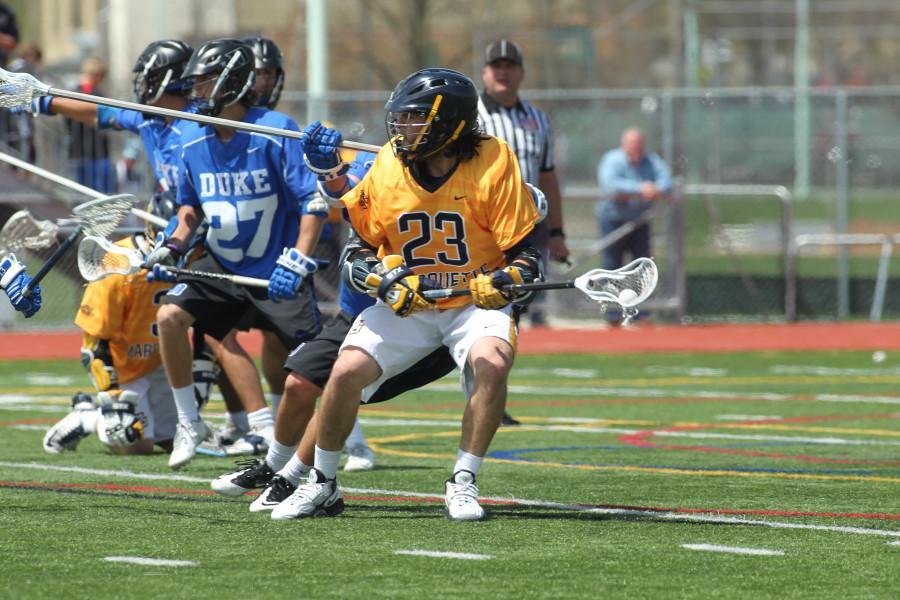 Tyler Melnyk was used to scoring goals in his two years with the Marquette men’s lacrosse team.

The program’s all-time leading scorer continued that trend in his National Lacrosse League debut with the Edmonton Rush, scoring four goals with an assist in the Rush’s 19-7 dismantling of their rival Vancouver Stealth. He was chosen as the game’s first star.

It was the first opportunity for Melnyk, who became the first Marquette lacrosse alumnus to play at the professional level. He has been on the team’s practice roster the majority of the season, but moved up after the team traded Corey Small to the Stealth. Edmonton’s Riley Loewen suffered an injury prior to this week’s game, opening up a spot for the Marquette grad.

“You never go into a game expecting to score a certain amount of goals,” Melnyk said. “We have the best defense in the league, and practicing against those guys every day and being around those guys has made the team a lot better. I’m wasn’t a shock to me that I was able to step in and produce.”

Melnyk, the Rush’s second round pick in this year’s NLL Draft, did not take long to notch his first goal. An outlet pass from Nik Bilic found Melnyk alone on the left side and made Vancouver pay. His first career goal came on his first shift and only a minute and change into the game.

“I couldn’t believe it,” Melnyk said. “I don’t really know what was going on. They left me wide open on the crease. The goalie wasn’t even really set in the net.”

Melnyk went on to score in every quarter, including a shorthanded goal in the fourth quarter.

His production wasn’t completely out of the blue. In addition to his field lacrosse experience with Marquette, he has also gone through the ranks of Canadian indoor “box” lacrosse. He scored 21 goals and 13 assists in 15 games playing with the Langley Thunder of the Western Lacrosse Association, a league that features many NLL players.

“It’s nice to have (Melnyk),” Rush head coach Derek Keenan said in his postgame comments. “You’ve got a kid who has worked really hard in practice over the week, comes in doesn’t say a lot, just minds his own business, does his work, you get him in and he scores four. It’s pretty special.”

There aren’t a lot of jobs available in a nine team league in the first place, but being drafted by one of the best squads in the league made it even more of a challenge for Melnyk to crack the active roster. He’s tried to not let it get him frustrated.

“You have to just keep your head up and keep working at it,” Melnyk said. “You’ll get your opportunity and thankfully I was able to make the most of mine.”

The victory pushed the Rush back into first place in the Western division, a position they held all of last season. There were expectations for Edmonton coming off a 16-2 season. However, Edmonton lost its first two games during a troubled time for the team. Keenan was absent behind the bench after his wife lost her battle with cancer. He has returned to the team, who has rallied around the reigning Coach of the Year.

“Now we are getting back into the swing of things and getting back on a roll,” Melnyk said, noting that the team will have a tough test against the top seeded Toronto Rock (10-2) next week.