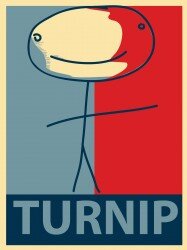 Marquette Student Government write-in candidate Pete Green released his platform this morning – Pete Green’s Powerpoint Plan for Marquette. Last year, the campus celebrity released a 14-point plan, but he said he did not want a plan this year that was limited to a number, but rather emphasized power.

The Turnip has the exclusive Pete Green Powerpoint plan for your view.