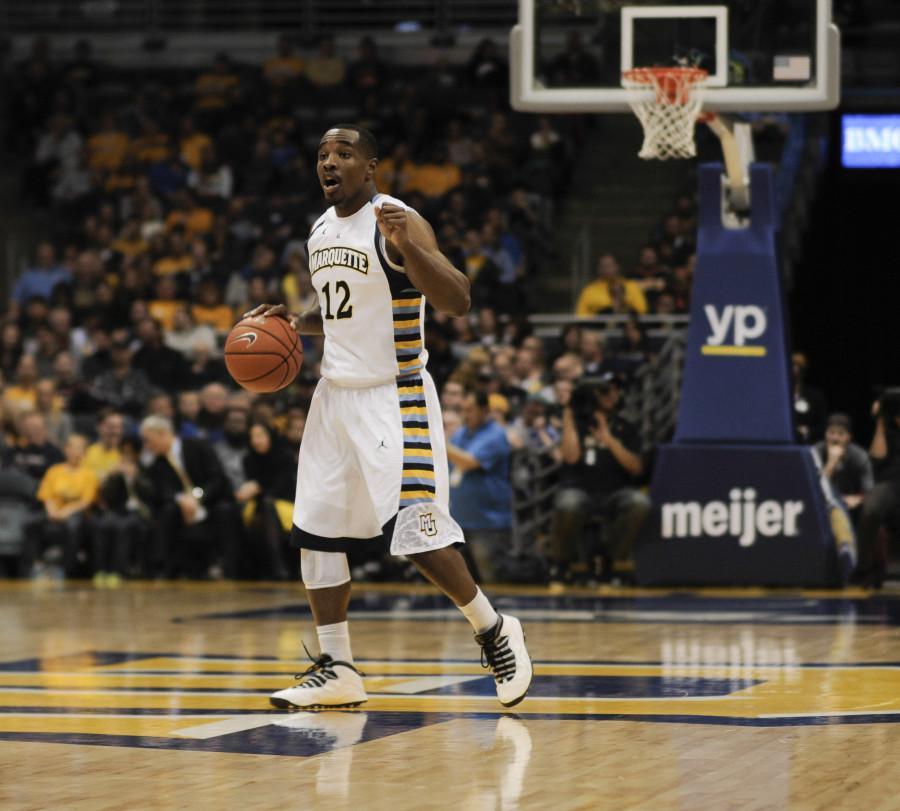 On a day when Marquette honored its embattled seniors, it was graduate transfer Matt Carlino who capped his brief tenure as a Golden Eagle in style. The BYU transfer drilled five 3-pointers and scored 20 points as he helped Marquette conclude the regular season with a 58-48 victory over the DePaul Blue Demons.

With the game in hand, head coach Steve Wojciechowski subbed out his seniors for walk-ons Michael and Matthew Mache, along with freshman Sandy Cohen III. It was a fitting moment to close what has been a tumultuous year for the trio.

“I was so happy for them,” Wojciechowski said. “12 months ago they didn’t know who their coach was going to be. They didn’t know all the unpredictable circumstances that we’ve gone through together. Those three kids have been terrific. It hasn’t always shown through in wins, but Derrick and Matt and Juan have been really good.”

“For them to be able to walk off their home court as winners makes me feel really happy for them.”

Wilson had a difficult time contemplating the moment.

“It’s something that it’s hard to describe the feeling,” Wilson said. “I’ve been through a lot here for four years on and off the court. I’m just thankful and I’m blessed to have the opportunity to go to the Sweet 16, Elite 8 and win a Big East regular season title. As a team and as a program during my time here, we’ve accomplished a lot.”

Carlino has a different perspective as a graduate student playing only one year in Milwaukee, but he had a similar response as Wilson.

“I was just very happy,” Carlino said. “It’s been a roller coaster of a year and to end on the Bradley Center like that was great.”

Marquette’s 2-3 zone has been exposed numerous times throughout the season, but not against DePaul. The Blue Demons shot 32.8 percent from the field and 16.7 percent from 3-point land. Leading scorer Billy Garrett Jr. was held to just two points and was shutout until the 3:35 mark in the game.

Marquette saved its best defensive effort for the final game of the season. DePaul’s 48 points were the fewest the Golden Eagles have surrendered all season. Wojciechowski said his team was dialed in defensively for a full 40 minutes.

“I think we had really good activity,” Wojciechowski said. “I thought our big guys really protected the basket, Luke, Steve and Juan did a great job of protecting our basket. I thought the perimeter was really active and I thought being able to extend our defense with a little three-quarter court press allowed us not to have to play the half-court defense quite as much.”

Both teams got off to a slow start Saturday afternoon and the first basket didn’t come until the 17:29 mark, when DePaul’s Jamee Crockett buried a three. DePaul held the lead for the first six minutes of action, but did not possess one the rest of the way.

The Golden Eagles earned the ninth seed with Saturday’s victory and will kick off the Big East Tournament against Seton Hall Wednesday night at 6 p.m. Marquette split the season series with the Pirates with each team winning on the road. If Marquette takes care of the Pirates, they will square off with Villanova, who enters the tournament riding a 12-game winning streak, in the second round.

It’s been a tough first year for Wojciechowski, but he said he believes brighter days are ahead and it starts in New York City.