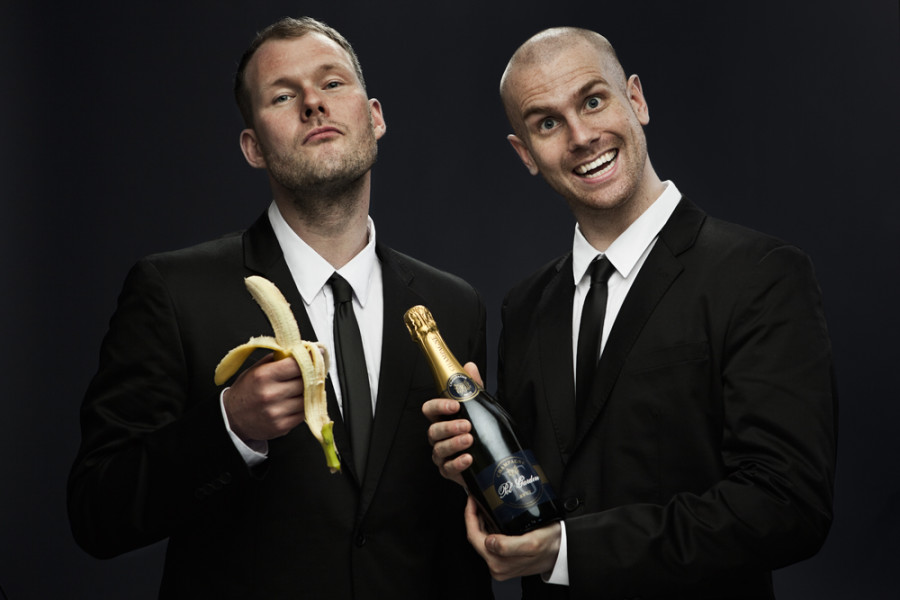 Last Saturday night there was a party at The Rave, which was a cannot miss for fans of Electronic Dance Music (EDM) or the Swedish DJ duo Dada Life. Dada Life’s set up team, the venue and the two behind the DJ decks did not disappoint the rowdy crowd that was packed into the third floor Eagles Ballroom. The concert was a part of the duo’s North America “Dada Land Compound Tour.” The tour promised to pack in everything that Dada Life stands for into a two hour set. This includes their motto of “Arrive Beautiful, Leave Ugly” and a massive pillow fight in the crowd. From the moment fans walked into the security checkpoint in The Rave, to the last epic confetti filled bass drop of Dada Life’s set, it was clear that this event was nothing like any other electronic show.

At the door, fans were issued their “smile mask” to be used during the duo’s popular single “One Smile”, and they were stamped into Dada Land by the “Dada Land Department of Immigration”. All of this to give the fans a sense that this is not a normal show, and that they are about to witness something they have never seen before, in a place some of them have never been: Dada Land.

The DJs who had the honor of warming up the citizens of Dada Land were Bixel Boys. Bixel Boys is a relatively underground group, but they have the perfect sound to warm up for the electro style super giants Dada Life. The set featured many original mixes by the Bixel Boys, as well as remixes of popular songs towards the end. This allowed everyone in The Eagles Ballroom to sing at the top of their lungs before the real party began. The set was fantastically paced for an opener so fans would not get too tired for the main event, but they could still have fun. The set started off with bass heavy songs for everyone to stand around and enjoy the tunes. It was not long until The Bixel Boys had everyone in Dada Land jumping and singing to popular remixes.

The set ended with the group’s sign off, and the words, “Who is ready for Dada Life?”. At that point, Dada Land was deafening with everyone screaming, ready for Dada Life to finally make their appearance. At that point, the room went dark, and the only thing that could be seen were four men on stage dressed in white, holding Dada Life flags, and the voice above saying, “Welcome to Dada Land”. After that, the crowd recited the “Dada Land Pledge of Allegiance”, and the bass kicked in and the room went “bananas.”

The next two hours were filled with heavy bass, strobe lights, lasers, unforgettable melodies, champagne flying from on stage and most importantly, bananas everywhere, which are a staple of Dada Life’s brand. The duo had the crowd guessing what original song they would mix in next, and had them singing at the top of their lungs. After two hours of bass drops and lights, the duo closed out Milwaukee with their popular song, “Born to Rage.” Before the last drop, the voice of the song sang “Wisconsin you were born to rage, now c’mon!”, then Dada Land jumped in unison for the last time of the night.

The overall experience of the show was the best I have been to. When I walked out of Dada Land, the only thing everyone around me wanted to do was to get ugly all over again.