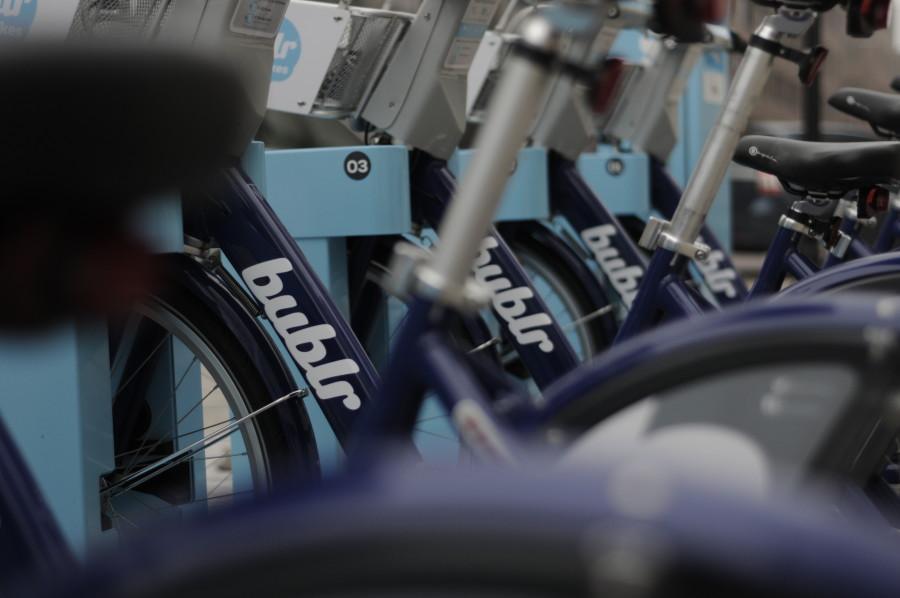 Bublr bikes give Milwaukee residents a new mode of transportation around the city. Photo by Cassie Rogala/cassie.rogala@marquette.edu

Paige Liberski, a senior in the College of Business Administration, tweeted at University President Michael Lovell to ask about implementing a bike sharing service on campus.

The next day, Lovell called the Bublr Bikes offices and now Marquette is looking into partnering with Bublr by fall 2015.

Bublr Bikes allows people to rent and return bikes to unmanned stations. It’s a fairly new addition to Milwaukee, beginning in 2013 with one station. It now has 10 stations throughout the city, with the Amtrak location being one of the most popular.

Bublr Bikes Operations Director James Davies said he likes to think of Bublr as a “first mile, last mile” operation, since it acts as a way to expand upon a personal vehicle or the bus system, in addition to being a recreational activity.

In addition to Liberski’s push for bikes, there were several student applications for Innovation Funds, which work to promote entrepreneurship and student ideas.

If the bikes are approved, Davies said there will be one central campus station that’s surrounded by others nearby. Liberski said she thinks outside of the Alumni Memorial Union would be a great place to host that central station.

A regular Bublr year pass is $35, but there will be a special, fixed Marquette rate so students will pay one fee. Bublr is working to negotiate the fee with Marquette Student Government.

Davies said he is optimistic about the usage Bublr might receive from the student body.

“Based on how many people took initiative, it’s a good indicator of its (potential) use,” Davies said.

While nothing is confirmed yet, Davies said getting the bikes is very likely. He said it’s an easier initiative to negotiate because Marquette is not a public school and does not have to deal with state budget cuts.

Bublr Bikes is also looking to expand its Milwaukee roots to reach the suburbs of Wisconsin.

In addition, Davies said Bublr is working on a reciprocity program with their bike providers. It would allow another state with the same bike system to make Bublr passes eligible.

Liberski said she frequently bikes to work because the buses come every 20 minutes. Davies chimed in and said Bublr is almost like an “on demand” feature.

“We’re very excited to hopefully have it on campus,” Davies said.