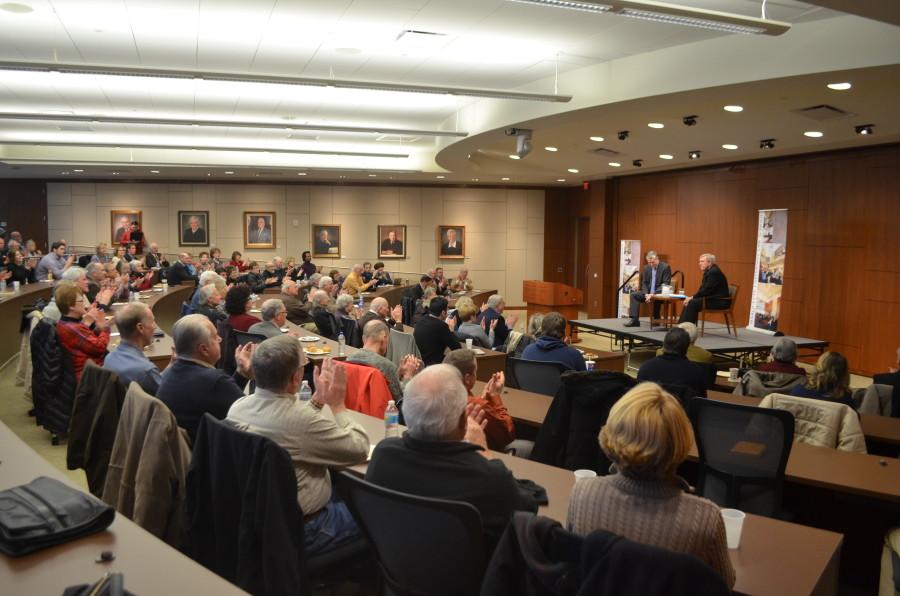 The Most Rev. Jerome Listecki, Archbishop of Milwaukee, talked about his archdiocese’s bankruptcy and the future of Catholic education while appearing as a guest Monday for Marquette Law School’s “On the Issues with Mike Gousha.”

Listecki, successor to Archbishop Timothy Dolan, recently celebrated his fifth anniversary leading the archdiocese. He spent an hour discussing his faith, his time in Milwaukee and the future of the church.

One major issue Listecki discussed was his decision to file for bankruptcy amid the clergy sex-abuse scandal back in 2011. The archdiocese filed for bankruptcies after spending at least $33 million in settlements, legal fees and other costs related to the scandal.

“The interesting thing about the Milwaukee bankruptcy is its complexity,” Listecki said. “It’s not like other bankruptcies that have been experienced by dioceses or archdioceses in the country. This bankruptcy was not generated by, what is referred to as, a look-back statute of limitations. This was a bankruptcy that was clarified by myself and I did so because I knew that we had limited resources and we needed to do something to address and bring some closure.”

“Catholic education has, over the last three (or) four years, defied the statistics,” he said. “It starts right away with leadership and to take a look immediately at what is the enemy of school systems across the United States.”

Gousha also asked Listecki about the future and mission of the Archdiocese that was discovered last year through what is called a synod. Listecki described the synod as an assembly or a gathering for people to articulate a vision for the church that would last 10 to 15 years.

“You cannot understand the church unless you understand mystery,” Listecki said. “Mystery is a part of all of our lives … We’ve lost that sense of the awe and the wonder.”

Listecki did take a moment to move the conversation beyond Milwaukee, sharing a comparison of Pope Francis to Pope John Paul II and Pope Benedict, as well as his thoughts on the inhumane actions of the Islamic State. He said he hopes the Islamic community would construct the parameters for what should be rejected as evil.

Going forward, Listecki said he has complete faith in the city of Milwaukee.

“There’s a real love for the city,” he added. “But you can’t just love the city.”