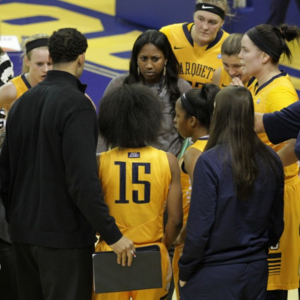 For the fourth weekend in a row, the Marquette Golden Eagles (8-20, 4-13) achieved a split in the two games on their weekend docket. The team triumphed against the Providence Friars 72-64 Friday night and lost to the Creighton Bluejays 82-60 Sunday afternoon.

Freshman guard Kenisha Bell turned in yet another admirable performance last weekend. She scored 14 points and brought down 13 rebounds against the Friars en route to the first double-double of her collegiate career. Bell also logged 11 points against the Bluejays, posting double-digit point totals in 22 of her 27 collegiate games. In light of these efforts, Bell was named the Big East Freshman of the Week.

Bell, however, was not the only one who contributed to the Golden Eagles’ victory against Providence. In fact, four Marquette players recorded double-digit point totals. Senior guard Arlesia Morse led the team with 15 points, Bell notched 14 and both senior Chelsie Butler and freshman Tia Elbert put together 11-point performances.

Providence led Marquette 32-28 at the break, but coach Carolyn Kieger’s squad ripped off a 9-0 run to take a 37-32 lead in the half’s opening minutes. Providence would not have another lead for the rest of the game. Tia Elbert’s 3-pointer with 6:54 left gave Marquette an 11-point advantage, its largest lead of the night.

A jumper from Providence’s Alexis Harris cut that Marquette lead to a mere five points with 3:07 left to play, but Marquette hit seven of its next nine free throw attempts to put the game on ice.

However, Sunday’s trip to Omaha, Neb., against Creighton did not go nearly as well for Marquette. The Bluejays jumped out to a 47-30 lead at the end of the first half and continued to bury the Golden Eagles in the latter half. Creighton’s advantage ballooned to a gargantuan 29 points with 7:45 to go before Marquette cut it down to 22 by game’s end.

Efficient shooting once again seemed to elude Marquette, as it often has throughout the year. No Marquette player shot better than 50 percent from the floor, and of the six players that attempted six or more shots, only Kenisha Bell (4-for-11) and Cristina Bigica (4-for-9) converted on more than a third of them. As a team, Marquette shot 31.7 percent from the floor.

With these results, Marquette has all but locked itself into an eighth place finish in the 10-team Big East. In order for the team to fall any further, they would have to lose their final game and either Georgetown or Providence would have to win their last two games.

The Golden Eagles close out their season at DePaul Sunday afternoon at 3 p.m.