Daniel Myers introduced as next provost 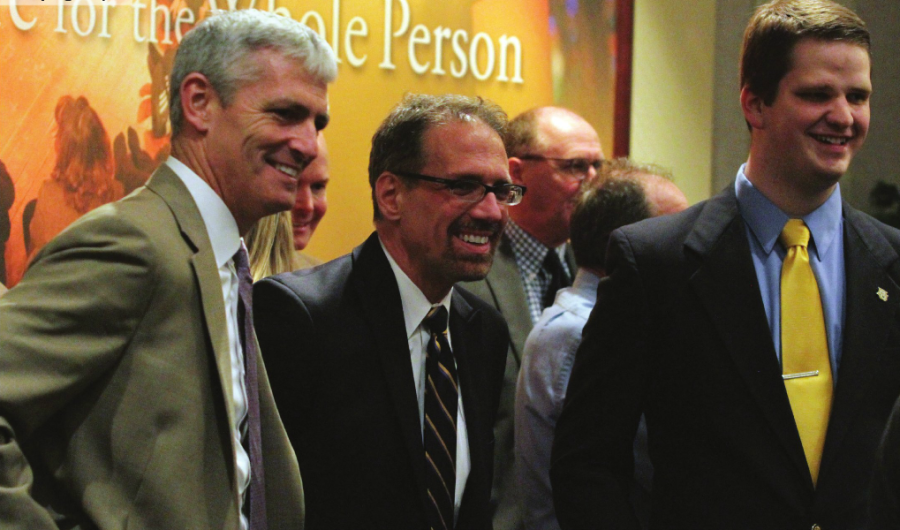 Marquette announced Monday morning that Daniel Myers will become the next provost, and he was later introduced by University President Michael Lovell in the Alumni Memorial Union on Monday afternoon.

Myers is the vice president and associate provost for faculty affairs at the University of Notre Dame. At his introduction, John Su, head of the faculty search mmittee, spoke first before handing the floor to Lovell to make the formal introduction.

“In Dr. Daniel Myers, we have an academic leader who can partner with Mike to ensure that our institution continues to enhance its reputation nationally and internationally and to endorse and strengthen our commitment to a 21st century Jesuit education,” Su said. “The provost search committee enthusiastically endorses Dan for his servant leadership style, his demonstrated record of bringing different groups together in the strategic interest and his commitment to Catholic higher education and the wellness of our students.”

Lovell thanked the search committee, and multiple other faculty, including Interim Provost Margaret Callahan, who has been serving as interim since June 2013. In particular, Lovell thanked the students, faculty and staff who filled out survey feedback forms.

“When we brought the four candidates in, they were all highly qualified,” Lovell said. “Going into it, I thought this was going to be a really tough decision. One thing that was remarkable is there was unbelievable alignment on who the next provost should be.”

After Lovell briefly summarized Myers’ additional qualifications, he took the microphone to a rousing 30 second round of applause.

Myers said he cannot wait to begin working with Lovell. Myers said he met over 200 people, all of whom are passionate about Marquette.

“It’s one thing to hear the president talking about the guiding values, and to read about them on the website,” Myers said. “It’s another to see people living it and expressing them as you talk to them as you go around campus. You sold me on Marquette, and I’m so glad you did.”

Myers said over the coming months, he will be very busy as he is still “wrapping things up at that other Catholic university.” Myers said he is looking forward to moving to Milwaukee.

“The most important thing for me to do during this period is for me to learn from you,” Myers said. “I really want to hear about your hopes and dreams for Marquette. Looking at things from your point of view, ‘What do you think the university should be doing?’”

Myers said they have a strategic plan laid out, but it needs to be filled with specifics and ideas. He plans on being able to develop the resources to ensure the strategic plan is successful. Myers said he looks forward to hearing from as many sources as possible, and that when he officially starts on July 1, he will try to visit as many groups as possible, to allow university members to interact with him. He invited people to email him at his recently activated email address, daniel.myers@marquette.edu.

Sebastian Becerra, a freshman in the College of Communication and RHA representative from Abbotsford Hall, attended the provost introduction because he is “really interested in the position of the provost.” Becerra is also a member on the Marquette Student Government Committee on Diversity, Inclusion & Social Justice.

“I think what is overlooked sometimes is diversity,” Becerra said. “Obviously we’ve been trying to get better about that here at Marquette, and I think we’re taking strides in that direction.”

During Lovell’s introduction of Myers, he gained some awkward chuckles when he acknowledged Myers was not the most diverse candidate. As Myers holds degrees from Ohio State University and University of Wisconsin, some expressed concern about whether he brings in diversity.

“I think it’s not as much a geographical location as it is about what he’s saying, and what he wants,” Becerra said. “Obviously Rowena (Pecchenio) being from Ireland- she has a good resume. But what is she going to do with that? How is she going to act upon that is what I think is important, and I think Daniel in his speech addressed that the best.”

The university declined to comment on the salary of the new provost, saying it is “confidential,” and “between President Lovell and Dr. Myers.” According to Marquette’s 2012-2013 tax documents, Callahan made $223,746 as her base compensation.