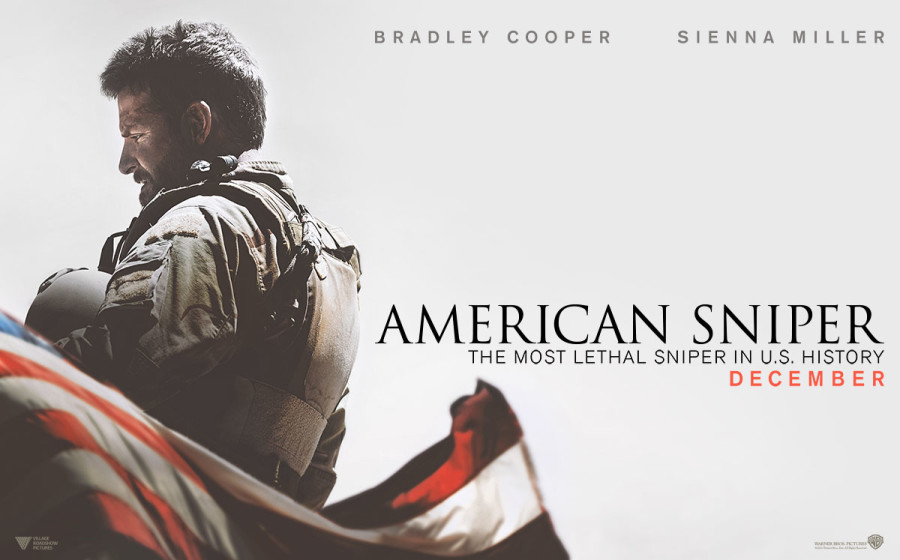 At 84 years old, Clint Eastwood is one of the most influential actors in the history of Hollywood, but his work in directing deserves just as much praise. Films like “Million Dollar Baby” and “Gran Torino” made a lasting impression in audiences alike and “American Sniper” is no exception. Eastwood’s direction has driven the movie to six Oscar nominations including Best Picture.

Bradley Cooper stars in this biographical film about Chris Kyle, a Navy SEAL sniper with the most confirmed kills in U.S. military history. Following Kyle through his upbringing, we see a timeline beginning in his hunting days with his father, up through his less-than-successful days in the rodeo. Kyle soon decides to pursue a career in the military, showing interest in becoming a Navy SEAL. Throughout his training, he’s known as the “old man” of the group. After he deploys, he inherits a nickname of a significantly different nature.

Racking up kill after kill as a sniper specialist, Kyle quickly becomes known as “Legend” for his killing rate, incontestable to any other military sniper (for the US, that is). The Al-Qaeda military is fortunate enough to have a sniper equivalent to Kyle named Mustafa. The two discover each other via word-of-mouth and make it a primary goal to eliminate the other, creating an intense rivalry in the heat of battle.

Kyle makes a total of four separate tours to the Middle East. Throughout that time his brother is deployed, his wife gives birth to two children and he watches it all flash by. Kyle suffers from Post-Traumatic Stress Disorder (PTSD), caused by his time in the military, and it carries over into the real world on American soil. Hearing the sound of drills from auto maintenance shops or lawnmowers down the street causes him to show small symptoms of panic. With each visit back home the symptoms intensify, creating drama between Kyle and his family, but also American life.

“American Sniper” does an excellent job of depicting the stressors of military life not only during battle, but throughout everyday living. Wartime is about critical decision-making with time against you. Scenes from the movie depict that in a rather dramatic, but appropriate, manner and create intense moments. My heart beat so fast at some points, I couldn’t sit still in my seat. It’s shocking to see how the military affects lives long after a soldier’s service is complete.

We all have this general perception of war: Soldiers risk their lives to protect the American people back home. Not only do they risk their lives, but they, in a sense, sacrifice them. We learn through the eyes of Kyle’s wife, Taya (Sienna Miller), that life is not the same after deployment. We see her begin to question the love she has for her husband, threatening to leave if he deploys again. We see the effect the military has on their marriage, but it doesn’t indulge as deep as it should into the children. Eastwood certainly could have put a bit more emphasis on the children, essentially growing up without a father figure around. In an already intense storyline, an aspect like that would have added a boost of emotional energy and created a nearly flawless film.

The movie has everything a Best Picture nominee should: memorable scenes, intense dialogue and, obviously, an interesting story. Quite honestly, that’s all I see “American Sniper” as—a nominee. While Cooper gives strong competition to Michael Keaton (“Birdman”) for Best Actor, “American Sniper” lacks the particular characterization to take home the Academy Award for Best Picture. I was on the edge of my seat quite often and the film lacked any dull points in the storyline. It’s just difficult to imagine “American Sniper” outdoing the success of films like “Boyhood” or “Birdman.”

Needless to say, the movie supplies audiences with two hours of action-packed drama. Whether Eastwood depicted Kyle correctly is up for debate. Viewers have gotten upset, saying that Kyle is depicted as a hero when many view him as a ruthless killing machine. “American Sniper” isn’t about that at all. It simply tells the story of the lifetime effects of war through the eyes of a soldier. Kyle’s story is certainly one for the books.