Administrator says replacement Marquette ID cards would not be viable 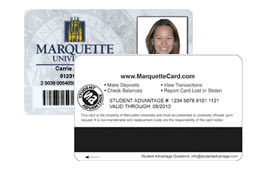 More than 1,040 Marquette Identification Cards were misplaced or damaged fall 2014.

Students are issued one card at the beginning of their tenure at Marquette and are expected to keep track of it throughout that time period.

According to Rob Mullens, Office Supervisor of Cards Services, said, if stored properly, a card should last at least four years.

If the ID card is lost a $25 fee is charged for a replacement.

Mullens said if a card has incurred a manufacturing defect, the fee will not be paid. Same goes for demagnetizing and stolen IDs. If a valid report is filed with the Department of Public Safety or the Milwaukee Police Department, the fee will also be waived.

Maddie Malone, a freshman in the College of Health Sciences, had her card demagnetized by her wallet. She was required to pay for it.

“I had to pay for a new ID when there was a simple solution,” said Malone.

There were 910 cards replaced due to loss and 134 were replaced for damage to the card.

Natalie Ullrich, a sophomore in the College of Health Sciences, finds the $25 a bit stiff.

“I think that the replacement fee is much too expensive because it’s pretty easy to lose a plastic card, especially when you have to bring it everywhere,” said Ullrich.

Mullens said it is “not fiscally viable” to provide an additional card to students. He said the costs involved in card production are too high.

Ullrich argued “we should get one replacement (card) for free and maybe only a replacement fee of $15 because they’re literally made of plastic.”

Allie Duenow, a freshman in the College of Nursing, suggested having an app available on phones that could act as an ID card.

Duenow finds the fee for a card replacement to be “incredible outrageous.”

Malone expressed frustrations about her card malfunctioning, as it occurred right before finals.

“The Union Station (where you replace your card) is closed on the weekends, so I couldn’t swipe into the library.”

“One free ID would be really nice… IDs are so essential to functioning here at Marquette and if you happen to find yourself without one, you’re screwed and that just doesn’t seem practical or fair,” said Duenow.

Mullens said the money collected from the fees charged for card replacement goes toward the operational costs of the department.

Kristin Cherrier, a freshman in the College of Nursing, echoed what others said about how one “free pass” would be nice.

“The cards are helpful, but they’re easy to lose or misplace,” said Cherrier.

“It’s frustrating that the IDs become inactive at no fault of our own and I don’t think it should be on us to pay to replace them in that case.”

While Mullens said students would not be charged for a malfunction of IDs, there is a discrepancy issue as to what a malfunction is and to what is the responsibility of the student, which can be seen through Malone’s situation.

While Cherrier is not a supporter of the $25 infliction, she does see Marquette’s side.

“I see why they have to be strict about it because it can be a safety or security issue,” said Cherrier.