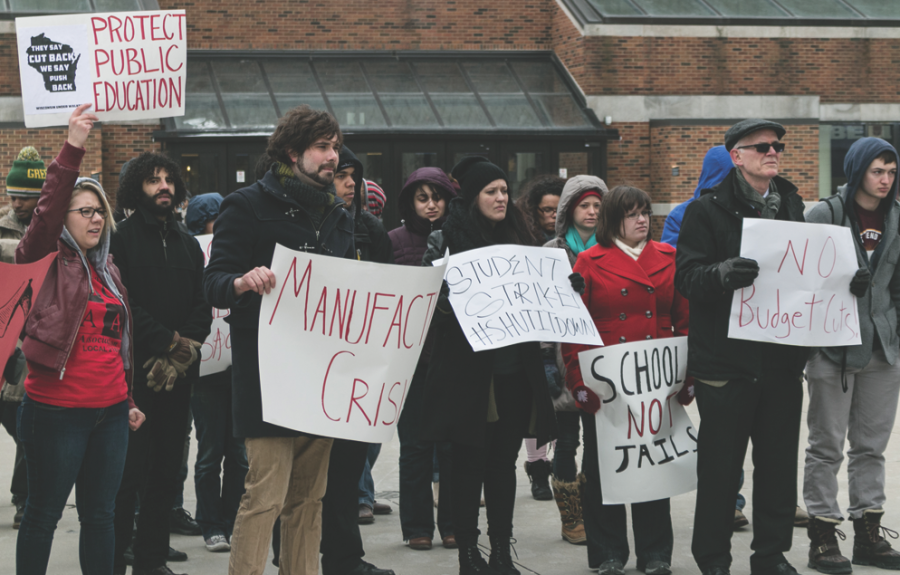 Protesters at the University of Wisconsin-Milwaukee took up banners Wednesday afternoon, chanting “no ifs, no buts, no education cuts,” and continuing demonstrations from last week against Gov. Scott Walker’s proposal to cut $300 million from the UW System.

Walker revealed the cuts, to be administered over the next two years, in his budget proposal last week.

The plan would make the largest cut ever to Wisconsin’s university system, but it also is geared to make the system more autonomous as state laws governing the UW System would be eliminated. The plan also extended the system’s tuition freeze by two years.

This translates to an estimated loss of $20 million a year to the Milwaukee campus according to a memo issued by UWM chancellor Mark Mone. He said the loss is roughly equivalent to the annual operating costs of the school’s Lubar School of Business.

The UW System would see a 13 percent cut in state funding, which is a 2.5 percent cut overall.

Student protestrs hung a banner between two trees in UWM’s Spaights Plaza that read, “They say cut back, we say fight back. No cuts to UW.” A small cluster of police officers waited inside the campus union to watch the event.

“Walker’s proposed budget is in the interest of the most well off and the most powerful in our state and it’s against the interest of UW System students and UW System employees,” said Andrew Urban, a UWM graduate student who organized the event with the Progressive Students of Milwaukee. “And so we’re out here making our voice heard, showing Scott Walker and showing the state that here at UWM, we do not support this proposed budget and these proposed cuts to the UW System.”

The rally turned into a march as roughly 80 students, staff and faculty made their way around the campus.

“It’s also going to damage the quality of education here,” said Chase Erwin, a UWM graduate student. “Students are going to suffer, while seeing their tuition go through the roof after the tuition freeze is up.”

Students in attendance at the rally voiced concerns about the governor not being in touch with UW students and understanding the full implications of his proposed cuts. They raised issues with an expected limit on educational resources that will be available to them, a predicted loss of valued tenure track faculty, and general threats to quality public education and the broader public sector of Wisconsin.

Several students expressed their disapproval of the protest and support of the proposed cuts.

“I don’t think they’re necessarily a bad thing because they increase operating flexibility for the schools in the system, so in the long term they can save money by having that greater flexibility,” said Jacob Westphal, a student in UWM’s Lubar School of Business.

Students at Marquette reiterated both sides of the argument about the proposed cuts.

Nathan Kraft, a senior in the College of Arts & Sciences and political director for Wisconsin College Republicans, said he “stands with Gov. Walker, and believes his bold reforms will benefit the UW System as they have benefited Wisconsin taxpayers.”

Seth Haines, chair of Marquette’s College Democrats and a freshman in the College of Arts & Sciences, echoed protesters’ concerns.

“Taking money out of education of any kind is always a poor decision,” he said. “An educated society is a productive society.”

The budget proposal has gained national recognition as demonstrative of Walker’s principles that could present themselves in a speculated 2016 presidential run.

The Wisconsin Legislature will debate Walker’s budget in the coming weeks.