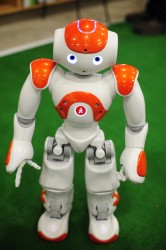 Passersby peering through the glass windows of Marquette’s Humanoid Engineering & Intelligent Robotics Lab may mistake it for a playroom, with its mini basketball hoops, soccer turf, worn out couches and friendly-looking humanoid robots.

The lab, sitting at the forefront of social innovation on campus, is also at another forefront: diversity in the tech fields.

In September, the National Science Foundation awarded a $500,000 research grant to Andrew Williams, director of the HEIR Lab, to address the gender gap in the robotics industry. Williams and his students are making video tutorials to teach girls from disadvantaged, minority backgrounds to use technology to teach people about social justice and cultural awareness.

“(The program involves) activities that will help them grow … surrounding social issues and gender issues and along the way they’re learning robotics,” Williams said.

The program, called Co-Robots for COMPUGIRLS, allows participants from African-American, Native American and Hispanic backgrounds to learn the programming language Python. They will then learn to program their robots and use them as a tool to teach others about culture. The hope is for girls to consider technology related careers as they prepare for college.

“A lot of times girls see engineering as ‘not for them,’ or math as ‘not for them,'” said Elise Russell, the graduate student who coordinates the program. “It’s not like they think ‘Oh I’m a girl so I can’t do it.’ It’s just that it’s not a really welcoming field … Girls just don’t get encouraged … And so we’re trying to actively combat that passive sexism by actively getting girls exposure and saying, ‘No this is not secrets for smart people, this is not secrets for men, this is something that you can access and you have every right to access and use in the way that you want.'”

The COMPUGIRLS program was created by Kimberly Scott, an associate professor at Arizona State University’s School of Social Transformation and co-researcher for the NSF grant. The program focuses on teaching girls about social justice issues and exposing them to technology they can use to express themselves.

In the case of Co-Robots for COMPUGIRLS, the girls will use “culturally responsive robotics.” This means they will program the robot to help demonstrate or teach something related to cultural identity or social justice. Girls can program the robot to recite a poem or present on a topic alongside them. In using these humanoid robots in an innovative way, the girls will get a chance to add their perspective to robotics.

“I do think that the entire engineering building filled with white guys is, in fact, a bad thing,” Russell said. “Not that they don’t deserve to be there. They do. It’s (just) that they are surrounded by people who are exactly like themselves, with very similar upbringings, and their perceptions and assumptions are never challenged and the kinds of input that you can get from more diverse sources are never tapped.”

If the program is successful, the team said they are considering starting similar programs in the Milwaukee area to continue their work teaching programming and combating the structural challenges of the robotics industry.

“(The) United States is facing a severe shortage of technology creators,” Williams said in his November TEDx talk at University of Wisconsin-Milwaukee. “According to … the National Center for Women & Information Technology, in eight years there will be 1.2 million computer-related job openings and not enough U.S. workers to fill them. … Why not we encourage, equip and educate 1 million African-American, Hispanic and Native American women and men in computer-related technology to fill this vital need for technology creators?”