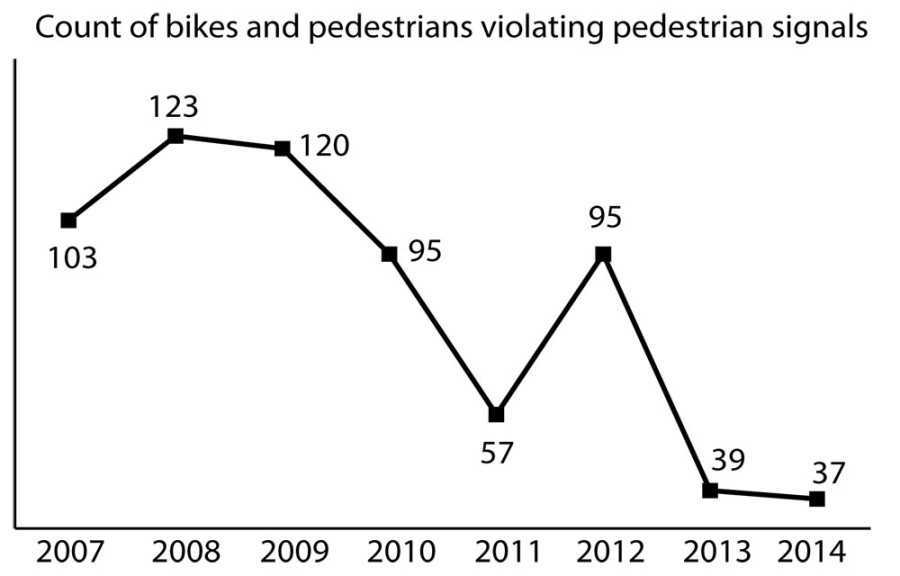 Now that the Department of Public Safety will be commissioned as its own police force, it will have the power to independently issue traffic citations to students for violating Wisconsin statutes — including jaywalking.

DPS Chief Paul Mascari said there is no policy set in place just yet.

“I think writing a citation is a last resort,” Mascari said. “I think we’d look at things on a case-by-case basis.”

Luckily for students who don’t like waiting at stoplights during winter months, Milwaukee has seen a marked decline in jaywalking citations, according to data from Milwaukee Municipal Court.

In 2007, 103 jaywalking charges were filed with the court. That number dropped to 37 last year.

According to the Wisconsin statutes, pedestrians crossing without the right-of-way can be subject to between a $2 and $20 citation for the first offense, and between $10 and $50 for offenses after that. The law specifies pedestrians have right-of-way at a crosswalk if they begin crossing while a “walk” sign is shown, and may proceed across the crosswalk with right-of-way, even if the “don’t walk” signal is showing.

“I know that it’s dangerous,” said Renee Pratt, a senior in the College of Arts & Sciences. “I drive a lot around campus, so it’s frustrating when people are ignoring the street signs.”

Mascari said the ability to issue citations was one of the benefits discussed while making this decision.

“We would look at enforcing those types of laws of keep everyone safe,” Mascari said. Mascari also said they see speeding and drivers failing to yield as an issue on campus, and hopes a police presence acts as a deterrent.

A deterrent is exactly what some students may need the next time they consider crossing dangerously.

Curtesia Robinson, a junior in the College of Communication, admitted to jaywalking every day. She said she runs late often, and doesn’t often feel like she has the time to wait for a walk signal.

“I leave late and if I see the opportunity to walk, I’ll just walk,” Robinson said. “If there’s no cars, I guess I’ll just go.”

Although this is a feeling shared by many students across campus, it is one that is discouraged by the law and DPS Lt. Jeffrey Kranz.

“I think the students can put themselves in harm’s way by jaywalking,” Kranz said. “We have a heavy traffic volume on campus, and the drivers that are coming through are not always aware of the high pedestrian traffic that occurs at Marquette.”

Kranz also said some students unfamiliar with Wisconsin laws should remember they don’t always know what drivers are thinking. Students from out of state or who were educated in defensive driving techniques may incorrectly assume a driver will be courteous and stop or slow.

Uncontrolled walkway laws (when a traffic signal is not present) differ from state to state. Wisconsin laws require pedestrians to yield the right-of-way to vehicles when crossing outside of an uncontrolled walkway.

The blinking light between the Alumni Memorial Union and Olin Engineering building is considered a controlled crosswalk, so drivers are legally required to entirely stop if the blinking light is activated by a pedestrian.

However, during class change times, both vehicle and pedestrian traffic can become congested. When this happens, it can be tempting to cross in front of cars and assume the vehicles will stop because the blinking light has been activated.

“The best advice is to always treat it as an active street and anticipate people not noticing the blinking light,” Kranz said. “You can’t just step onto the street and expect traffic to stop for you.”

Kranz said drivers can be distracted or texting, which could have dangerous, if not fatal, results. Careless crossing can also result in a vehicle hitting another from behind.

There have been two incidents in the past few weeks of students being hit by cars on campus, one which resulted in a female graduate student in the hospital with serious injuries.

Ultimately, Kranz advises students to always be aware of their surroundings. He said it can be difficult to judge vehicles’ speeds, and sometimes a speeding vehicle can close a distance quicker than a pedestrian may estimate. Even in situations where pedestrians believe they are safe crossing against the light, Kranz suggests erring on the side of caution.

“You’re not going to win in a car versus pedestrian collision,” Kranz said.